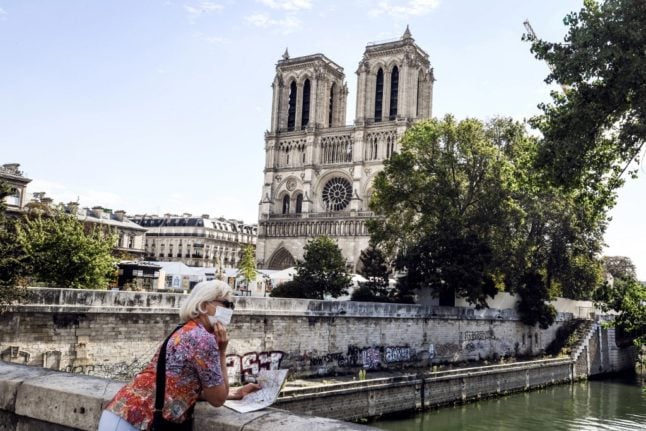 While travel into France from outside the EU is almost entirely banned apart from a very few exemptions for essential travel, travelling for tourists purposes from inside the EU and Schengen zone is allowed – albeit with compulsory Covid tests and extra paperwork at the border.

IN DETAIL: The rules for travelling to France from within the EU

For Ginevra Morello, a student from Milan, it meant a chance for her and a friend to check off an item on their bucket list – have their portrait done by an artist on the Place du Tertre, the famed square perched at the top of the former village of Montmartre.

“Before there were so many people who wanted to do it, and now there are not so many people, so it’s an occasion for us,” Morello told AFP as birds chirped in the crisp sunshine – a sound usually drowned out by chattering throngs on the cobblestones.

She would have liked to mark the occasion with a celebratory drink in one of the postcard-perfect cafés, which like restaurants are closed.

“It’s a pity because I think the most beautiful thing in Paris is to visit the locals, the cafes and the bars,” she said.

Instead, foreigners find themselves strolling the streets, admiring the architecture of monuments they cannot visit inside, and making sure they get back in time for the 6pm curfew.

“It’s a little sad that there are so few people – you can tell that mostly it’s the French visiting,” said Paul Vida, an automotive quality control manager, after touring the Sacre-Coeur Basilica.

His strategy: Just pick a place and go, without worrying if it’s closed or not, and make sure to get back before curfew — “otherwise it’s a €135 fine!”

While shopping remains an option at smaller boutiques, the grand department stores like the Galeries Lafayette that usually draw tourists by the busload have been closed as a precaution.

But for many foreigners, the lack of fellow travellers makes taking in the sights all the more enjoyable.

“But the views!” he said on the nearly empty steps of the Trocadero gardens, gazing at the Eiffel Tower rising majestically across the Seine.

“I know, the pub life, the restaurant life is very sad, and even the fact that you can’t go to the top of the Eiffel Tower, that’s a bit frustrating, but you do have to appreciate the little things,” he said.

“To be honest, it’s quite quiet and a lot more peaceful. I kind of prefer it this way.”

Last month, foreign clients made up just four percent of bookings at hotels currently open, according to the Paris Region association of tourism professionals.

People still willing to come despite the closures and curfew face the additional expense of producing a negative Covid test upon entry into France, and usually when going back home.

In return, they get a chance to see the city a way few ever will: In 2019, before the crisis hit, Paris and the surrounding IÎle-de-France region attracted 50 million visitors, a figure slashed by two-thirds last year.

“It feels like I own Paris!” said Ivan Vdovicic, a 27-year-old optician from Switzerland, while enjoying an outdoor coffee at the Trocadero with a friend.

“It’s a bit weird that there are so few people on the streets,” he admitted. “That’s why I’ll be coming back to Paris when normality is back.”