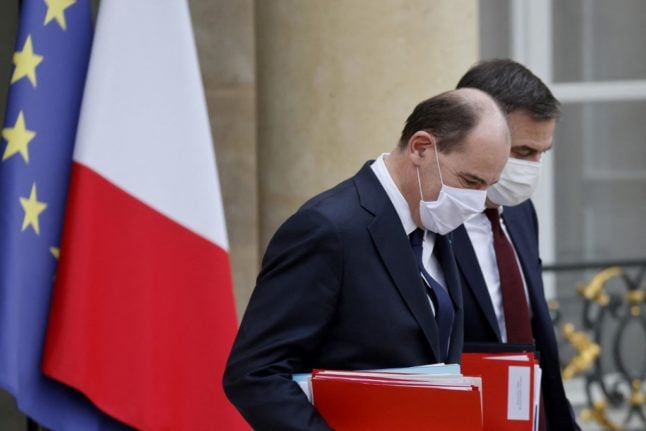 What is the latest on the health situation?

In short, things seem to be getting worse in France.

After two weeks of a slight but sustained fall in case numbers, cases are now rising again, albeit still slowly.

On Wednesday France recorded 31,519 new cases, the highest single-day figure since mid November, just after France locked down for the second time.

Véran warned on Wednesday: “We have erased in one week the two weeks of consecutive drops we had.”

However the overall figures mask wide regional variations in which some areas have continued to see a fall in cases while other ‘hotspots’ such as Nice and Dunkirk have seen big increases in both cases and hospitalisations.

Does this mean another lockdown?

Despite the rise in cases, another national lockdown is not expected to be announced this evening.

The French government at the end of January ruled out a third national lockdown saying that at present it was not necessary.

Overall case numbers are roughly the same as they were when that decision was made, with France still on the ‘high plateau’ of a weekly average of around 20,000 new cases per day.

So what measures can we expect?

In a change from the broadly national approach that France has adopted since the summer, this week has seen the announcement of several regional restrictions.

The Alpes-Maritimes département has seen tougher rules on masks and the closure of larger shops, while Nice and parts of the French Riviera, along with the northern town of Dunkirk, have been placed on a weekend lockdown.

Several government sources have been quoted as saying a regional approach is the way forward.

Over the past few weeks, areas with high cases have received a visit from the health minister and extra restrictions and/or resources put in place after discussions between local and national government.

It could be that this evening sees a more formalised approach with thresholds being put in place for areas to be placed under extra restrictions.

Véran said that full details would be announced in the press conference, but warned that:  “Several areas are clearly above the alert threshold, as is the case in the Provence-Alpes-Côte d-Azur region, the greater Paris Île-de-France region, part of Grand Est and the Hauts de France region”

He added: “The next few days are going to be crucial, even decisive.”

Which areas are of concern?

The French government spokesman Gabriel Attal on Wednesday said there were about a dozen départements of particular concern.

He did not name these, but the départements that currently have the highest incidence rate (cases per 100,000 people) are; Alpes Maritimes, Bouches-du-Rhône, Moselle, Nord, Oise, Pas-de-Calais, Paris, Seine-et-Marne, Somme, Var, Essonne, Seine-Saint-Denis and Val-de-Marne.

The weekend lockdown seems to have been the preferred option so far.

As it operates in Nice and the Riviera, this keeps in place the 6pm to 6am curfew only during the week, but from 6pm on Friday to 6am on Monday full lockdown rules apply – the same rules as were in place during the second lockdown in November and December. This means that only essential trips outside the home are allowed such as food shopping, medical appointments and walking the dog and all trips require the attestation permission form.

In a slight change to the autumn lockdown rules, trips out for exercise over the weekend are permitted in Nice, for a maximum of 1 hour within 5km of the home (as opposed to the 1 hour, 1km rule previously).

Nice has not seen the closure of all non-essential shops, but shops with a surface area larger than 5,000 square metres are closed throughout the Alpes-Maritimes département, with the exception of food shops and pharmacies.

Areas with high levels of the virus have also seen increased testing and been sent extra vaccine supplies.

The press conference begins at 6pm, and we will be following it live here.