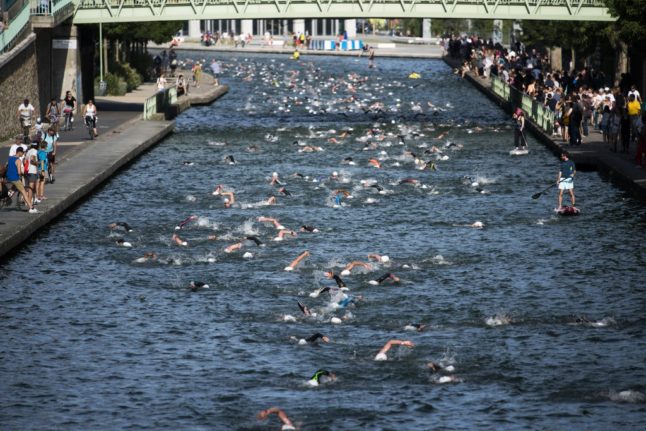 Swimming in the Seine in Paris is currently not allowed, swimming events in the city currently take place in the Ourcq Canal. Photo: AFP

His challenge, titled “La Seine à la nage” (Swimming the Seine) is to swim the entirety of the river’s trajectory, from its source near Dijon, through Paris and all the way to Le Havre with no assistance.

Germain is the youngest son of Paris mayor Anne Hidalgo and became the youngest person to swim across the channel in 2018, at the age of 16.

“By swimming across the Channel I reached the culmination of all my efforts. Swimming is a discipline that I have been practising since the age of 4,” Germain told Enlarge your Paris.

This would be the first time anyone has attempted to swim down the Seine. Germain will swim independently for 52 days starting on June 6th, completing 15km for 6 hours a day.

To carry his things, he’ll have to pull a kayak weighing around 60 kg with all the necessary material on it.

A doctor will accompany him throughout the journey to keep an eye on his health, as the swim has an extra challenge – the quality of the water, particularly through Paris.

Making the River Seine clean and safe for swimming within Paris is a longtime goal of the city. The promise was first made by former President Jacques Chirac when he was mayor of Paris in 1988.

Thirty two years later and although progress has been made, swimming in the Seine in the city is still not allowed. Anne Hidalgo’s administration have been working on making it clean enough to swim in, and several swimming events for the 2024 Paris Olympics are currently scheduled to take place in the Seine.

Germain hopes that his project will be an opportunity to talk about the environment and sustainability.

READ ALSO: How plans are progressing in Paris to make the seine safe for swimming by 2024

He is currently working with the French GoodPlanet Foundation founded by filmmaker and environmentalist Yann Arthus-Bertrand, and is planning on conducting workshops on biodiversity and pollution in local schools.

His adventure will be made into a documentary and a series of photographs.