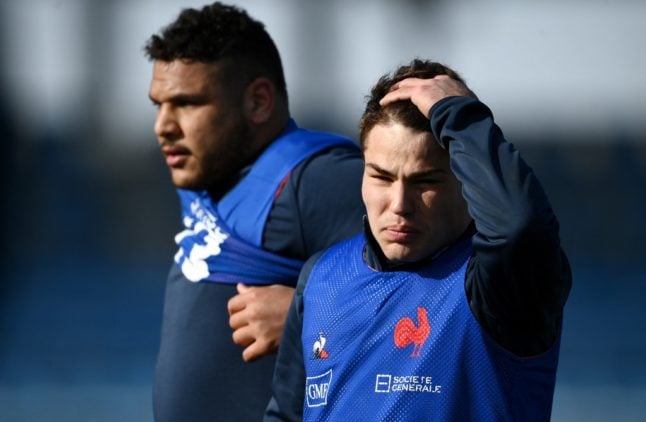 Scrum half Antoine Dupont, right, is one of the players who tested positive. Photo: AFP

The French Rugby Federation (FFR) announced on Monday that captain Charles Ollivon, Cyril Baille, Peato Mauvaka, Romain Taofifenua and Brice Dulin have been withdrawn from the squad after contracting the virus.

The new cases take the total number in the France camp to 14, including coach Fabien Galthie and scrum-half Antoine Dupont.

Six Nations Testing Oversight Group (TOG) saying it would review the situation on Wednesday although there is no suggestion as yet of postponing the match.

“A decision on whether the France v Scotland fixture can go ahead will be made at that stage,” said the TOG in a statement.

“Should the decision be that the fixture cannot go ahead, the match will be rescheduled for the earliest possible date.”

The French players who tested positive on Monday have all left the group, with the remainder of the squad, all of whom tested negative, training with restricted movement and no close contact for the next 48 hours.

“The return to collective training is set for Wednesday subject to the results of tests carried out every 24 hours,” the federation said in a statement.

Scottish Rugby said that they were keen for the match to go ahead as and  postponement could mean more than 10 players being unavailable for a rearranged fixture due to player-release agreements with clubs.

“We will be working closely with our Six Nations counterparts to press the  case for this game to go ahead, should it be medically safe to do so,” the statement read.

Dupont tested positive last week and had already been omitted from the 31-man squad for Sunday’s game in Paris. The FFR also revealed that hooker Julien Marchand and centre Arthur Vincent had tested positive on Saturday.

Dupont, the Six Nations player of the season last year, is reportedly asymptomatic and could, in theory, have observed a seven-day quarantine and returned for the game at Stade de France.

The French government is increasing the length of quarantine to 10 days from Monday.

Marchand and Vincent were also left out as were prop Mohamed Haouas and winger Gabin Villiere who tested positive on Friday.

France are top of the Six Nations table after beating Italy comfortably in Rome and then edging Ireland 15-13 in Dublin on February 14.

Team manager Raphael Ibanez said on Sunday, before the latest positive tests, that the French were fully expecting to meet the Scots.

“We are entering a week of preparation and I can assure you that we will be ready to face Scotland at the Stade de France,” said the former France captain.

With a host of different players joining the squad the staff, which is already without Galthie and forwards coach William Servat, faces a difficult task to ready the team to face Scotland.

“We have prepared an adaptation plan, you can trust Fabien,” said Ibanez.

“If other cases turn out to be positive, we have in any case taken exceptional measures with the help of the Covid group which is watching over the France squad.

“The tests will be tripled, we will have a test every day.”

Ibanez struggled to pinpoint how and when the coronavirus infiltrated the French ranks.

“It’s not just the French,” he said. “The English coach has been affected… and many others.

“Nobody can know how (the French contracted the virus). Was it in Ireland?

Why didn’t it affect the media who are invited to observe the training.

“All it takes is an infected doorknob for the contamination to spread.

“It gives us a real reason to have a great game against Scotland.”