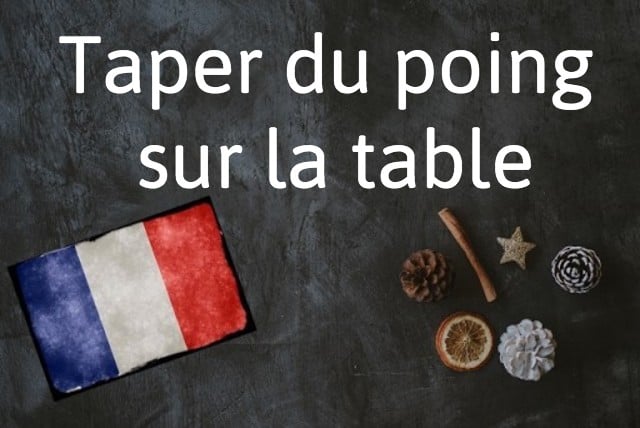 Why do I need to know taper du poing sur la table?

Because it is a common expression that sounds a bit more aggressive than it is.

Taper du poing sur la table directly translates as ‘to bang your fist on the table’, le poing being the French term for 'fist'.

As you may have guessed, this is a metaphor. It means to 'make one's opinion known' or to ‘put one’s foot down'.

It's different from taper du pied (stamp one's foot), which implies being annoyed or angry. Taper du poing doesn't necessarily imply anger, but it does have a degree of brashness to it. Imagine someone actually slamming their hand on the table to make their point – that's the essence of the expression.

It's not necessarily a compliment. Obviously when it's used about the president it shows leadership and firmness, but it can also be a way to say that someone is pushing their opinions through just because they're the most outspoken person in the room.

However if you've been to a French dinner you will know that sometimes a little fist-banging is necessary.

OPINION: Why arguing over the dinner table is a crucial skill in France

Au boulot, il faut savoir taper du poing sur la table. Sinon personne ne t'écoutera. – At work, you have to be able to clearly state your views. Otherwise no one will listen to you.