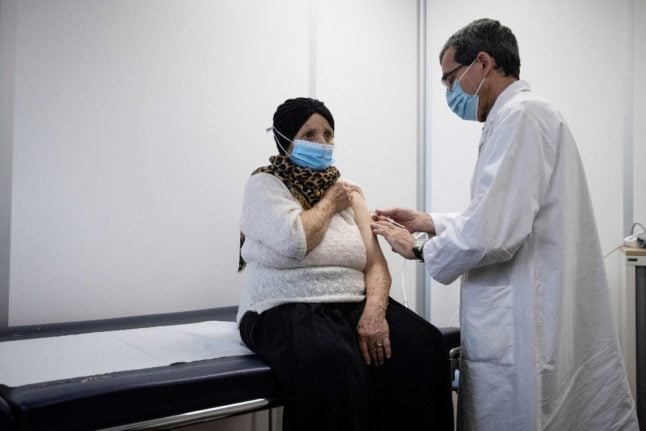 A woman is vaccinated in a health centre in the Paris suburbs. Photo: AFP

Let's start with the good news, on Thursday France's vaccine programme hit a milestone with 1 million people now fully vaccinated, having received both doses of the vaccine.

On the chart below, dark green represents both doses and pale green the first dose only. The red squares represent the number of people who need to be vaccinated for the country to reach immunity – so once all the red squares turn dark green, France is protected.

Of the injections given, unsurprisingly the largest proportion went to the over 80s, since France began its vaccine programme in Ehpad nursing homes before expanding to over 75s in the community and then health workers.

It was intended to inspire confidence in the vaccine programme, but Olivier Véran's photoshoot has certainly inspired some good jokes . . . https://t.co/xHkezcZzxt

Sixty percent of the injections so far have been given to women – probably reflecting the fact that women on average live longer so there are more of them in the over 80s group.

The greater Paris Île-de-France region – the country's most densely populated – has seen the highest number of injections so far with 107,061 Franciliens fully vaccinated and 329,939 having had their first injection.

The south-west region of Nouvelle-Aquitaine, which is a popular retirement spot, had the next highest number with 90,745 people fully vaccinated and 262,925 having had their first dose.

The Direction générale de la Santé says it is on course to have administered 4.3 million injections – of which 2.6 million are first injections – by the end of February.

In less good news, however, plenty of problems remain.

France is lagging behind many of its neighbours, with the UK, Germany, Italy all having given more doses.

In terms of the number of people fully vaccinated, France is actually ahead of the UK, which has only given 558,577 second doses to France's 1 million. Looking at the first dose figures, however, and France is trailing miles behind the UK's 15 million first jabs.

This is as a result of the country's differing policies – the UK has decided to delay the second dose by up to 12 weeks to give as many first doses as possible, while France is sticking to the manufacturer's recommendation of 3-4 weeks between doses, which has resulted in fewer people getting the first dose.

However a country with a comparable policy to France such as Germany is still ahead with 2.9 million first doses and 1.5 million second doses.

Then there are the problems on a local level, with many people in eligible groups reporting difficulty in getting an appointment at their local vaccine centre.

When we asked readers of The Local for their experiences, around half said they had been able to secure an appointment easily, the other half said it was very difficult and in many cases they were still waiting.

Currently the following groups are eligible for a vaccine in France

The next category to open up will be the 65-74 year-old group, which will be in March although as yet there is no date for that.

The other issue France has to contend with is vaccine scepticism.

More recent polls show this has fallen a little since the beginning of January, when only 40 percent of people were telling pollsters that they would definitely be vaccinated, but still a concern.

ANALYSIS How worried does France need to be about its vaccine sceptics?

At present most criticism is from people who want a vaccination and cannot get one, but in general those in high-risk groups are less likely to be sceptical than younger people who are in good health.

The programme is set to open up to the general population in later spring/early summer, which is when the true level of vaccine scepticism will become apparent.