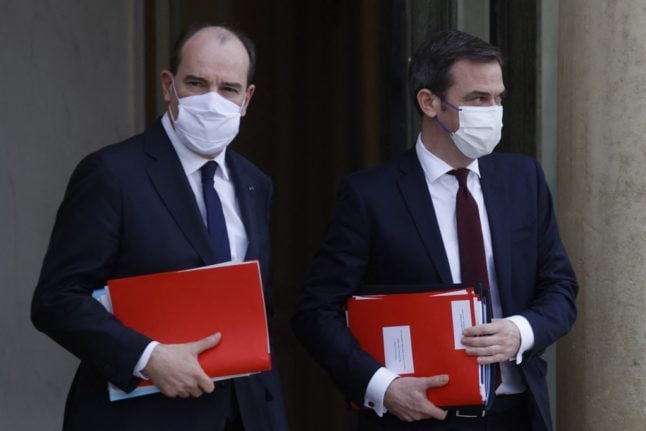 French Prime Minister Jean Castex and Health Minister Olivier Véran after the weekly Defence Council meeting. Photo: AFP
Following the meeting, government spokesman Gabriel Attal announced no changes to the current health rules, but stressed that it was crucial that people continued to respect the rules in place.
“The situation is so fragile that anything can tip it over,” Attal told journalists. “It would not be reasonable to relax our efforts or to cry victory.”

Schools in some regions of France are currently on holiday and government sources had previously said that new restrictions are not expected before the end of the holiday period on March 8th, unless the health situation deteriorates dramatically.

“Let's give the French a bit of breathing space,” one source was quoted as telling French media, while Prime Minister Jean Castex is not scheduled to be part of the regular Thursday evening press conference.

At present the situation in France is relatively stable, although several départements are giving cause for concern with high rates of the new variants of the Covid virus.

Overall the number of new Covid cases have seen a slight but sustained fall, from a daily average of 20,000 new cases last week to 18,000 this week.

France's Covid case numbers continue to drop, even without a lockdown. If things continue like this, ?? will count 15,600 new cases on average per week in 10 days, which is down from over 18,000 now and 20,000 just one week ago. Beware of big regional differences though. https://t.co/GhlNpIa9RU

The emergence of new variants also continues to worry health chiefs, with new variants including the UK, South African and Brazilian variants now accounting for 25 percent of all cases in France.

READ ALSO What is France doing to control the spread of new variants of Covid?

The eastern département of Moselle has reported 300 cases of new variants within a week, which officials say cannot be linked to travel or a single cluster.

Health chiefs will also be watching nervously to see if travel and family visits over the February school holidays leads to a post-holiday spike in cases.

For this reason France is unlikely to see a significant relaxation of the rules currently in place in the coming weeks, although ministers are discussing a possible reopening of some cultural sites such as museums while Culture Minister Roselyn Bachelot has announced a series of 'experimental' concerts with strict health rules in Paris and Marseille in the spring.