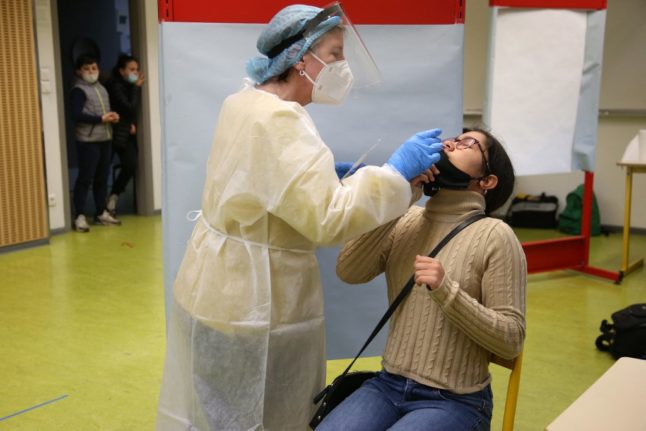 Testing in schools will switch from nasal swabs to saliva tests. Photo: AFP

The test is considered slightly less accurate than the nasal swab, but it is easier and more pleasant to use, and is being rolled out in schools, followed by universities, to ramp up mass testing in educational settings.

It will not be used on contact cases or people with symptoms.

The test involves spitting a small amount of saliva into a tube, which is then analysed in a laboratory.

Unlike the nasal-swab antigen tests, the saliva test does not give on-the-spot results but has to be sent to a laboratory to be analysed.

Mass testing of  pupils and staff has been promoted by the French government as a way of keeping schools open but the virus under control, but many pupils found the nasal swab tests uncomfortable or distressing, so the new saliva test is being rolled out first in schools.

It will then be extended to universities, which are currently running around half of classes with in-person teaching.

“We are going to multiply collective screening operations, notably in schools (…), but also in universities,” Health Minister Olivier Véran announced, adding that the saliva test was “more comfortable” for children.

The saliva test was last week given the green light for use from France's medical regulator Haut Autorité de Santé, which recommended it for use in asymptomatic people.

Epidemiologist Catherine Hill of the Gustave Roussy institute told France Info: “The salivary test is a little less effective but it is so much more practical and we can have such a better coverage rate that it is absolutely worth it.

“The problem is that the virus circulates with asymptomatic people: we can't find them, neither can their contact cases, so we let the virus circulate very widely on the sly. The young population – in principle less prone to the serious symptoms of the disease – is largely concerned by this.”
France has previously produced a saliva test – known as EasyCov – but this has been judged not sensitive enough for mass testing and screening programmes. It has been licensed for use on people with symptoms, on whom nasal swabs cannot be used.
The government hopes that increased screening in schools will keep the UK variant of the virus, thought to be more infectious among children, under control.
The target is to have been 200,000 and 300,000 tests per week in schools by mid February.