It was to be a highlight of the art calendar: 230 works by impressionist master Henri Matisse gathered at France's leading modern art museum to mark 150 years since his birth.

But thanks to the pandemic, the show at the Pompidou Centre in Paris stayed open for only 10 days after it began in October, and it looks highly unlikely to resume before the paintings are packed away again at the end of February.

Only 17,000 people secured a ticket in time — an abysmally low figure for a museum that attracts more than three million visitors each year in normal times.

“For an artist that was absolutely not melancholy, this is something very melancholy,” said Pompidou curator Aurelie Verdier.

This week, desperate museums demanded a chance to reopen — even if only partially — with two petitions to the government signed by hundreds within the industry and wider art community.

“For an hour, a day, a week or a month — let us reopen our doors, even if we have to shut them again in the case of another lockdown,” it says. 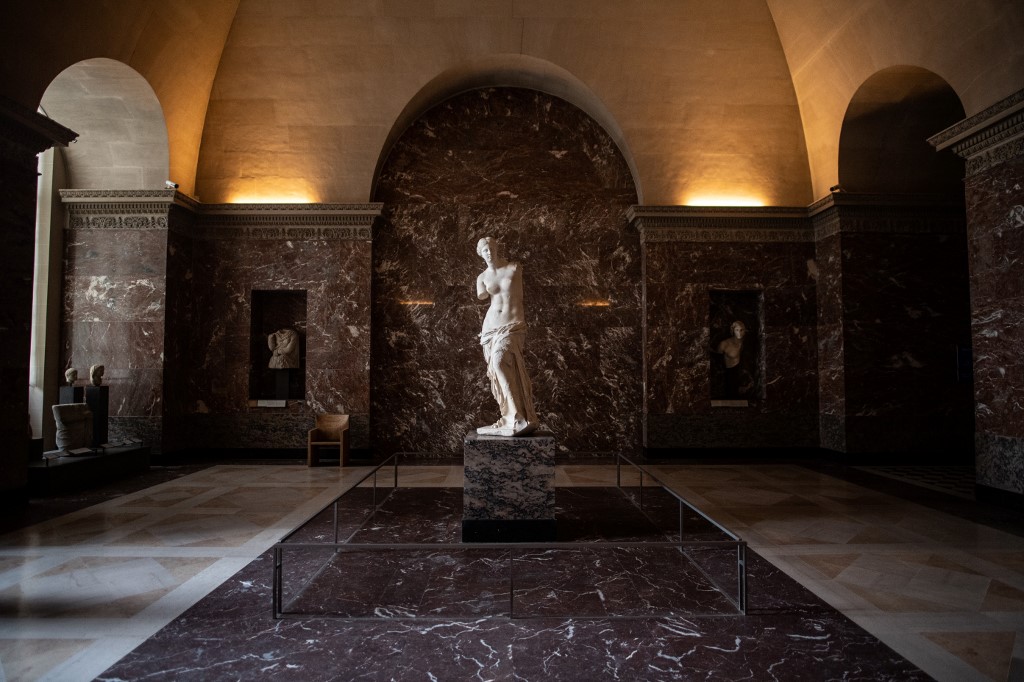 The Louvre Museum in Paris remains closed. The rebellion of museums is growing against a closure they believe they do not deserve: petitions and proposals were sent to Culture Minister Roselyne Bachelot's cabinet for a quick reopening. Photo: AFP

Museums had hoped to reopen in December when the last lockdown ended, but as with restaurants, theatres and cinemas, they have remained shut as infection rates remain stubbornly high.

Some exhibitions — such as a photo exhibition at the Grand Palais featuring Man Ray, Diane Arbus and Robert Frank — have been and gone without anyone getting to see them.

Many shows are unable to prolong or postpone their dates, because the paintings are booked in elsewhere around the world or must make room for the next exhibition — always planned years in advance.

“It's a nightmare. The dates (for opening and closing) change endlessly,” said Christophe Leribault of the Petit Palais, where an ambitious exhibition of Danish art was delayed and ultimately managed just four weeks of public viewings. 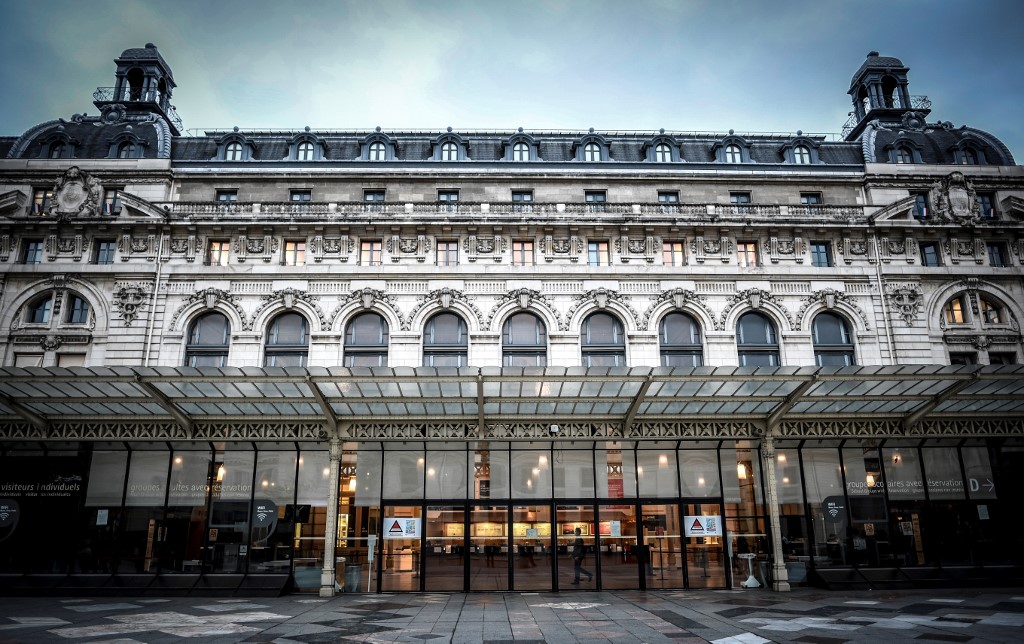 The empty entrance of the Musee d'Orsay in Paris. Photo: AFP

“I managed to negotiate some extensions. But after a year, we had to return the paintings to make room for the next show on the great Italian painter Giovanni Boldoni, while also having this concern that his works might get blocked in other exhibitions in Italy.”

The petitioners say they are ready to accept tougher health protocols and even more limited numbers than during the brief summer respite — following the example of other countries such as Italy which has partially reopened many cultural sites.

They say art is a powerful way of keeping up people's spirits, particularly the young who have been denied much of their social life for almost a year.

“Museums are without doubt the places where human interactions and the risk of contamination are the least proven,” said another petition published in Le Monde newspaper this week and signed by many public figures, including singer and former first lady Carla Bruni.

There is the added grievance that small, private galleries have been allowed to reopen, and are often packed with people in desperate search of diversion.

Frederic Jousset, on the board of the Louvre and head of the ArtNova investment fund, said museums lacked the economic clout to pressure the government.

But he held out hope for “the hundreds of petitioners coming out of the woods to reveal the thoughts of the silent majority”.

“Museums are effectively open already: the heating is on, the lights are burning, the guards are there,” he told AFP. 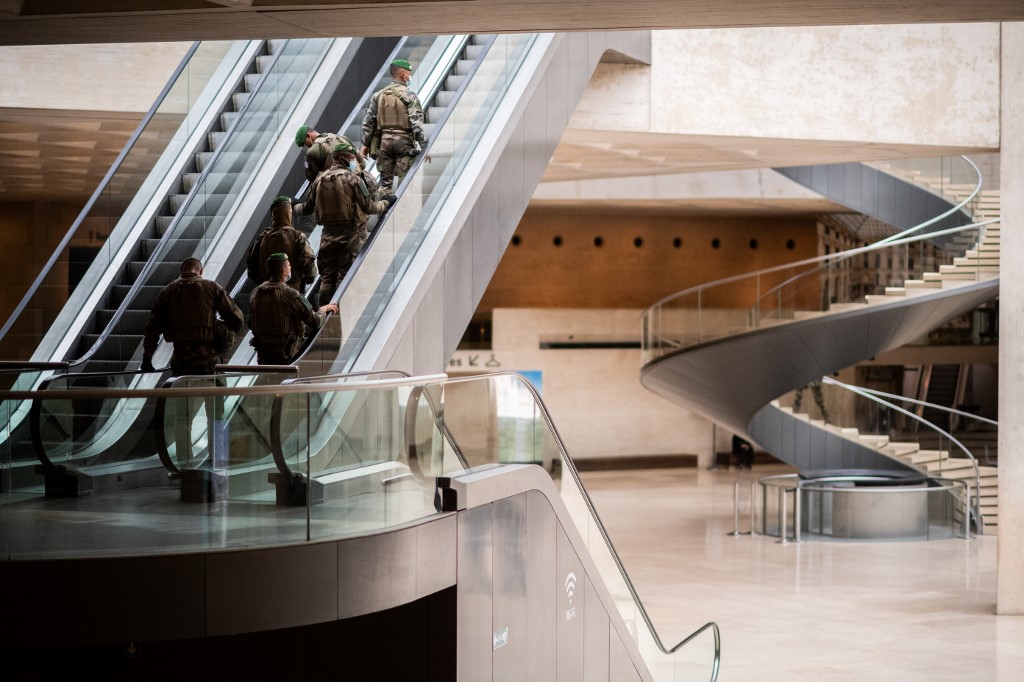 Soldiers patrol the empty entrance hall of the Louvre Museum in Paris, as it remains closed due to the pandemic. The Louvre suffered a drop in attendance of 72% compared to 2019, and a loss of revenue of more than 90 million euros, the museum announced in January. Photo: AFP

Unlike theatres, no dress rehearsals are needed, the petitioners add. They just need to call in a few furloughed staff and the doors could reopen tomorrow — perhaps only on certain days, in low-infection areas, or for certain groups such as pupils and students.

They accept that such a move risks inciting jealousy on the part of other shuttered sectors, such as cinemas and theatres.

But for the sake of the nation's mental and economic health, the government “must have the courage to make the choice — and quickly,” said Jousset.