A nurse washes a patient infected with Covid-19 in the intensive care unit ward at the Lyon-Sud hospital in Pierre-Benite, on January 25th. Photo: AFP
Ingri Bergo
[email protected]
@ingribergo


French President Emmanuel Macron has decided not to impose a new lockdown and let school holidays go ahead as planned in France. But can France really avoid another confinement given the state of the health crisis?

On Thursday, just as schools in some parts of France prepared to go on a two-week break, the French government held yet another press conference on the Covid-19 epidemic.

But this time there were no big announcements or breaking news, only a confirmation of earlier reports that there would not be a third lockdown – at least not yet.

“A lockdown must be a last resort. Today’s situation does not justify it,” Prime Minister Jean Castex said, confirming that during the holidays people in France could go ahead and travel to other regions if they wanted, though cautioning that everyone be extra vigilant as the health situation was still “very fragile”. 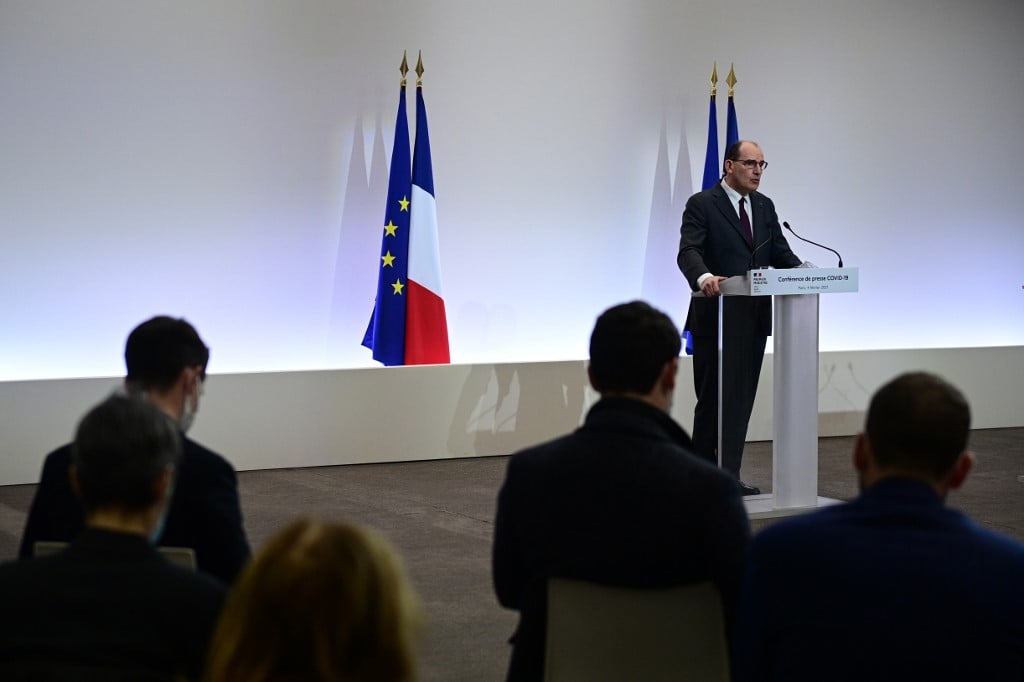 Not imposing lockdown was decided by the president himself at the Health Defence Council meeting earlier this week. Macron was reported to be adamant that a lockdown could be avoided, if the current health rules were reinforced.

France has been on a nationwide 6pm-6am curfew since January 16th and working for home is the rule for everyone who can. Cafés, bars and restaurants have been banned from offering in-house services since autumn and can only do delivery or take away, while cinemas, museums and theatres remain completely closed along with gyms and ski lifts.

But even with all these measures, the country’s Covid-19 rates have been increasing steadily for weeks. France has gone from registering 18,000 cases weekly on average at the beginning of the new year to between 20,000 and 25,000 now. Hospitals have been under a sustained pressure since mid November, and never enjoyed a big drop in Covid patients as seen this summer.

One Paris hospital chief described the outlook for the weeks ahead not as worrying but “terrorising”.

Scientists have also predicted that the new, more contagious variant first discovered in the UK will be dominant in France by mid March (this variant now represents 14 percent of all Covid cases, up from 1.3 percent at the new year).

Considering this, plus the uncertain threat posed by other new variants detected in France, those first discovered in South Africa and Brazil, several scientists have urged the government to confine sooner rather than later, to prevent the epidemic from – once again – spiralling out of control as it did in Spring and Autumn 2020.

“I think this is one of the rare times when we see a widening gap between scientists and politicians,” Antoine Flahault, an epidemiologist and director of the Institute for Global Health at the University of Geneva, told The Local.

Flahault, who monitors Covid-19 closely, has long criticised European countries for acting too late to curb the spread of the virus and has advocated for a “zero Covid-strategy” as applied by countries in Asia.

This strategy implies a swift crackdown as soon as there is a Covid outbreak  in order to eliminate spread early. It is a method that relies on draconic measures and close state surveillance, and it is generally seen as too intrusive to be complementary with European democratic values. 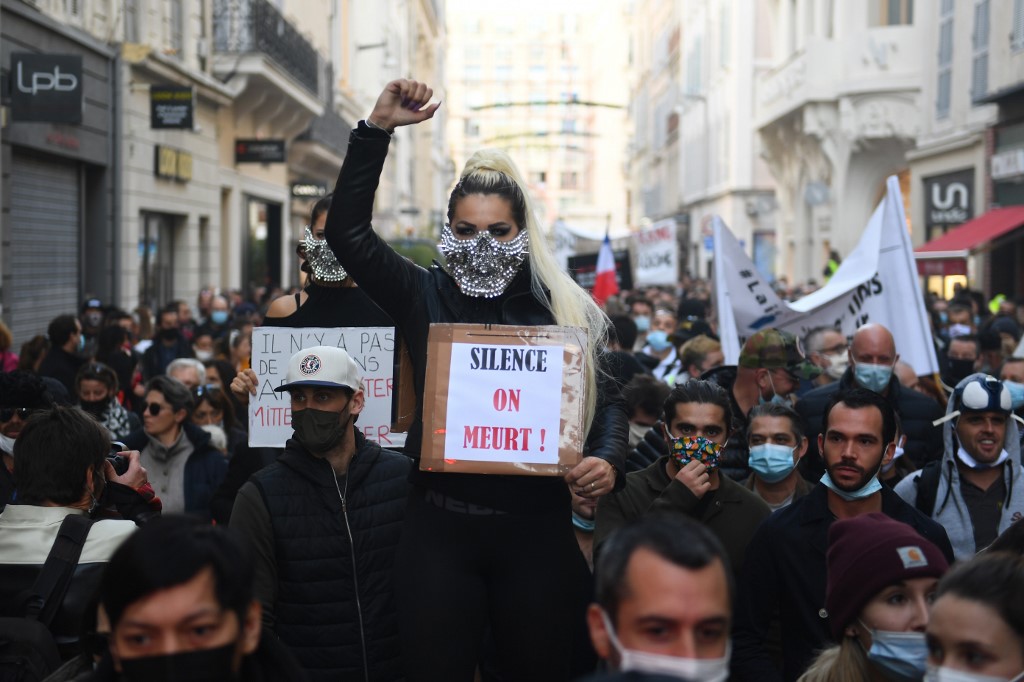 “Silence, we are dying” reads a placard at a protest by the night club and restaurant sector in Marseille, south east France, on November 26th. Photo: AFP

In France, the government has chosen to stick to the European method: waiting until a lockdown is absolutely necessary, which has been waiting until hospitals are at the brink of being overwhelmed.

But with the current level of spread in France, “no one can foresee another flare-up,” Flahault said.

“In a country with 20,000 cases per day, you need a strategy that halves this number every week. That requires a strict lockdown, with school closures,” he said, adding that the upcoming school holidays would have been a “perfect” opportunity to regain control over the epidemic.

Extending the holidays to keep everyone at home at the same time was one of the methods the government considered, but dropped.

“From a strictly scientific view, it is not the most efficient way to contain the pandemic,” Daniel Camus, an epidemiologist and professor at the Pasteur Institute in Lille, told The Local regarding the government's decision to let holidays go ahead.

“But on the other hand the government is aware that their decision needs to be acceptable in the eyes of the population,” he said. “In that sense, this is a good compromise and therefore a good decision.”

Macron is aware of the street riots in the Netherlands and has been anxious that similar scenes could be reproduced in France, which has seen regular outbreaks of violent protests during his time at the Elysée. He has also watched with anguish the economy crippling under the previous shutdowns and is well aware that many businesses remain at the brink of bankruptcy.

For a president who ran on a promise to turn France into a thriving modern economy and who is soon facing re-election, these things weigh heavy in decision making. 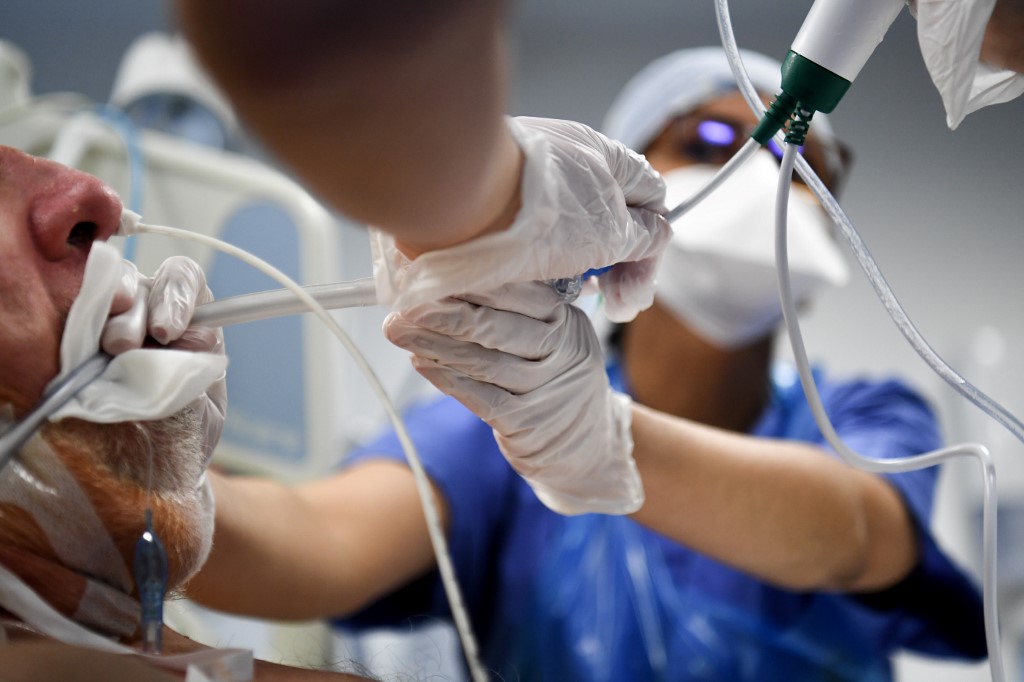 Those arguing that a lockdown can be avoided have also pointed out that the situation in hospitals is still somewhat manageable. Nationally, patient numbers have risen slowly but steadily since mid January, from around 24,200 to 27,800 today. Of the country’s total intensive care ward capacity, Covid patients occupy 64 percent.

But national numbers are different from regional ones. Some areas like Brittany have been more or less spared, while others like Provence-Alpes-Côte d'Azur, the region around Nice and the French Riviera, struggle with over 90 percent of their intensive care units filled by Covid patients.

“From the hospitals point of view, this is obviously not a decision we can appreciate,” Célestin-Alexis Agbessi, a doctor at the Bichat Claude-Bernard Hospital in Paris, told The Local. His thoughts echoed those of many hospital chiefs around France and particularly the capital who were expecting a new lockdown.

Île-de-France, the greater Paris region, has an intensive care unit occupancy rate at nearly 63 percent. But at Bichat, every single wing was full, Agbessi said. New arrivals had to be transferred to other establishments.

“Île-de-France must be put on lockdown. There's no question about it,” the doctor said.

Agbessi said the best solution would be to scrap the centralised French approach and rather issue rules based on local levels of spread, a need he believed to be particularly urgent considering the varying levels of spread of the new variants across the country.

MAP: How the new Covid variants are spreading across France

With people going on holiday, the risk was that the variants would follow, increasing spread in areas that so far were spared.

“On an epidemic plan, it makes no sense,” Agbessi said.

“We're asking the government to not just look at the economy, but also at the human costs. But that's their task, not ours. Our job is to keep treating patients.”