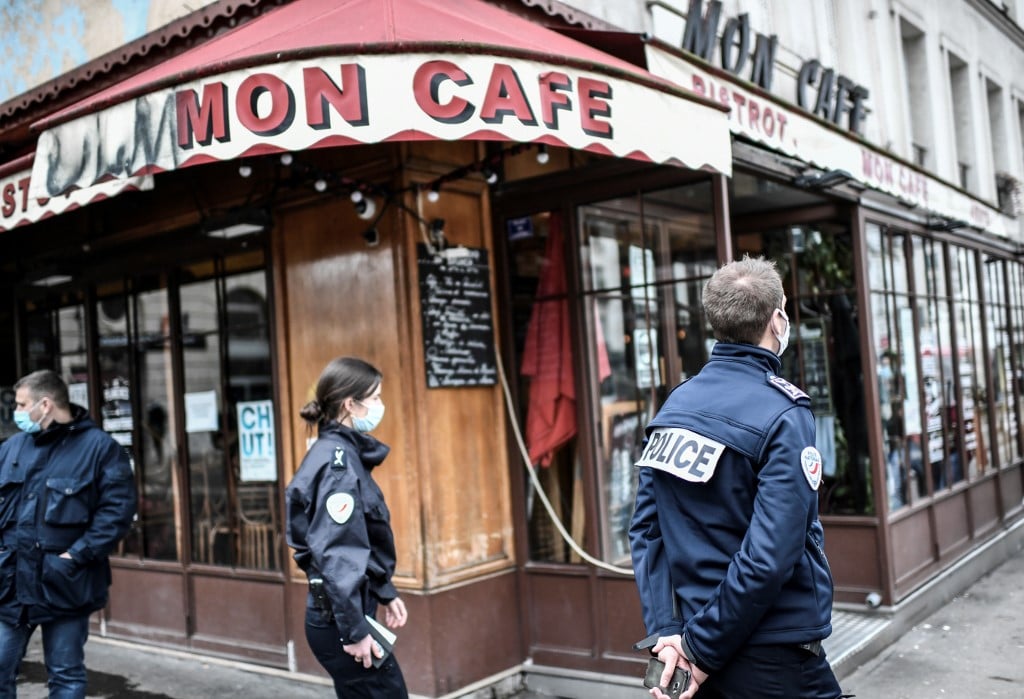 Police walk past a closed café in Paris on February 3rd, to ensure compliance with health rules aimed at curbing the spread of the Covid-19 pandemic. Photo: AFP

Prime Minister Jean Castex and several other ministers will give another live Covid update at 6pm on Thursday, to lay out the next steps for France as the virus continues to circulate across the country.

This will be the last such scheduled announcement ahead of the February school holidays, which begin in some parts of France on Saturday.

READ ALSO February holidays in France – what are the rules and the latest advice?

That, however, will depend on how the epidemic develops in the coming days and weeks.

Here's a look at what the latest numbers indicate. 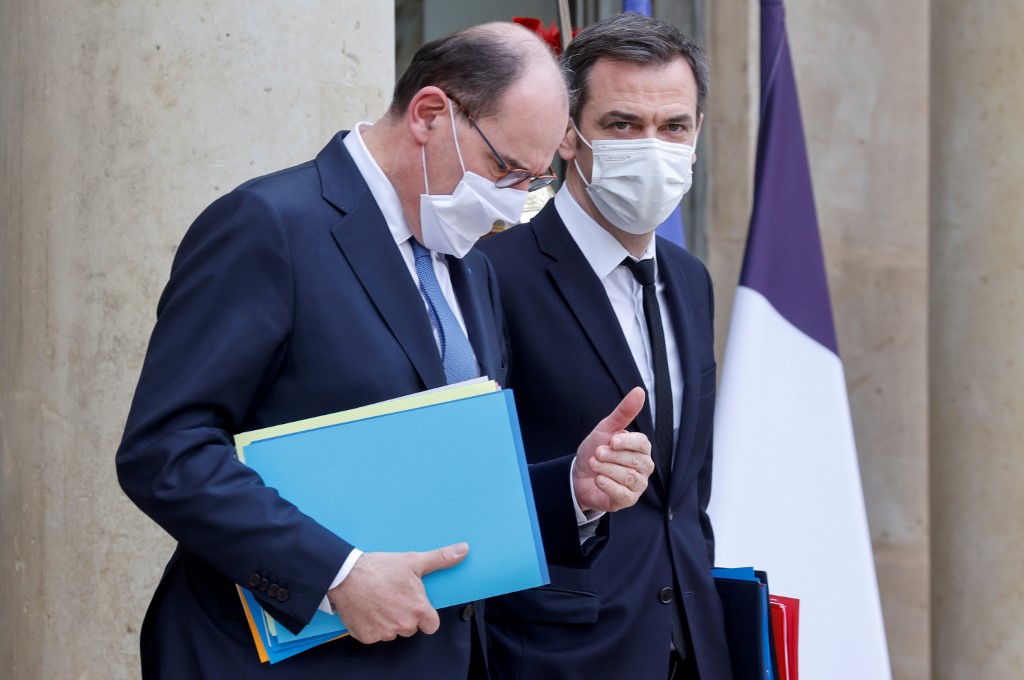 Prime Minister Jean Castex and Olivier Véran will both be at Thursday's press conference. Photo: AFP

Covid-19 cases have been rising for weeks, but at a slow and steady pace.

Looking at the weekly average, it has risen from around 18,000 cases per week in early January to over 20,000 now.

It’s the first time the Covid growth rate has kept stable for so long at such a high level of spread, which is likely due to the curfew and other health measures in place.

Hospital patient numbers too have risen slowly and steadily for weeks now.

On Wednesday, a total of 27,955 patients were in hospital for Covid in France. That was 116 fewer than the day before, but followed weeks of nearly uninterrupted growth since January 10th (see graph below). 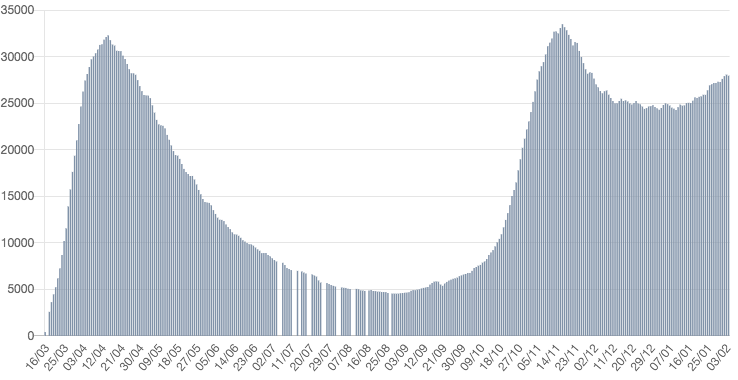 Hospitals are under less critical pressure than at the height of the first and second waves of the virus. When patient numbers peaked in early April and early November they exceeded 32,000.

However, staff have been under sustained pressure for months, without seeing a similar drop in patients to this summer, as total patient numbers have exceeded 24,000 since November 1st.

Intensive care units have also seen the number of patients rise steadily since early January, with a nearly uninterrupted – albeit slow – growth that began on January 7th. 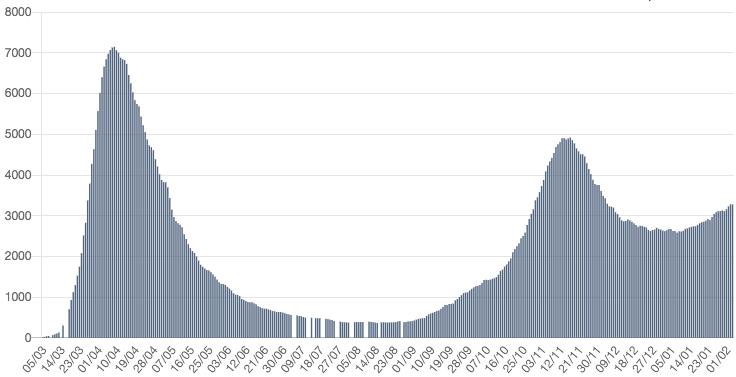 France had 3,277 patients in intensive care wards on Wednesday, which was three less than the day before, but following a rise of 6 percent in one week.

Covid patients on Wednesday occupied 64.6 percent of the total national intensive care capacity, but some areas of eastern France have reported that their intensive care wards are nearly saturated. 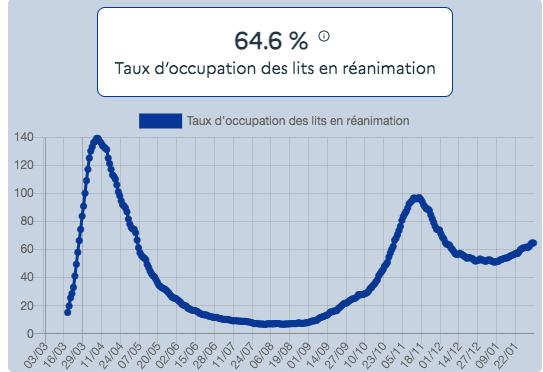 South east France is the hardest hit with a pressure exceeding 90 percent in the départments of Alpes-Maritimes, Bouches-du-Rhône, Alpes-de-Haute-Provence, Hautes-Alpes, Var and Vaucluse. Hospitals in NIce have been forced to transfer ICU patients out of the region.

The big uncertainty at the moment is how much the new variants – the ones first registered in the UK and South Africa – of the virus will impact the rise in spread in the coming weeks.

Health authorities are still establishing how fast they are spreading, conducting “flash studies” every couple of weeks to determine their growth rate.

According to the latest study, new variants now account for 14 percent of the total new cases on January 26th and 27th, up from 3.3 percent on January 7th-8th and 1 percent at the beginning of the new year.

“It is not explosive, it is linear and continuous,” Bruno Lina, a virologist and member of the Scientific Council, told the French TV channel BFM in Lyon, the city where the lab analysing the new variants is located.

Lina, who is in charge of these studies, said there were big regional differences as to how much the variants had spread across France, with the greater Paris region Île-de-France seeing particularly high levels.

While these are just preliminary results, they indicate an exponential spread of the new variants, increasing by around 60 percent per week – less than the 70-100 percent weekly increase registered in other countries that do not have a night time curfew and other restrictions France has.

The government is hoping that the current measures – the 6pm curfew, keeping cultural establishments closed alongside bars, restaurants, gyms and others and asking everyone to work from home if they can – will be enough.

No one can know whether it will be, but, one government adviser told Le Parisien: “For now, it holds.”