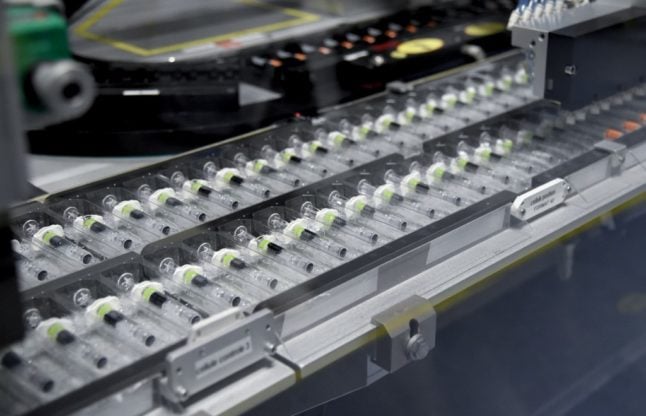 French President Emmanuel Macron on Tuesday evening hosted a meeting of vaccine producers and laboratories, including veterinary laboratories, aimed at speeding up production of the available vaccines after a major shortfall in the doses expected at EU level from AstraZeneca.

After the meeting he announced: “From the next few weeks, that is to say from the end of February to the beginning of March, we will have sites in France that will produce the vaccine.”

The companies involved are Recipharm, Delpharm, Fareva and Sanofi – which had already announced a deal to produce 125 million doses of the Pfizer BioNTech vaccine while it awaits approval for its own vaccine.

The production in France will involve the Pfizer and Moderna vaccines and will focus on the bottling and packaging of vaccine doses ready for distribution.

“Production at the first site will begin in March for the Moderna vaccine,” at a lab operated by Recipharm, Industry Minister Agnès Pannier-Runacher told RTL radio.

“We'll then have a production site running in April for the Pfizer-BioNTech vaccine,” she said.

“And in May, we should (also) be producing the CureVac vaccine, for which we are waiting for approval,” she said, referring to the German biotech firm that could start French production at a lab owned by Fareva.

A French Sanofi lab will start making the Pfizer-BioNTech vaccine in the second quarter, even as it pursues research on its own jab, as will the French firm Delpharm.

Macron also said on Tuesday that anyone in France who wants a vaccine will be offered one “by the end of the summer”.

This accords with the timetable previously laid out by health minister Olivier Véran, who said that everyone who wants a vaccine will be offered one by the end of August.

Macron told the TF1 channel that 80 percent of nursing-home residents – some 500,000 people – would be vaccinated with both doses by early March.

Macron defended France's record in the face of criticism for its slow rollout, especially compared with neighbour Britain which began its inoculation programme weeks earlier than EU countries and has set a much faster rate.

IN NUMBERS The first month of France's Covid vaccine rollout

He said France's rollout “may seem too slow” when compared with countries that had “made other bets”.

“But I defend the strategy we have adopted with Germany, with the European Union, which is precisely to vaccinate in Europe,” he said.

France's medical regulator on Tuesday approved the AstraZeneca vaccine for use in France, making it the third vaccine available in the country, but recommended that it only be used on under 65s.