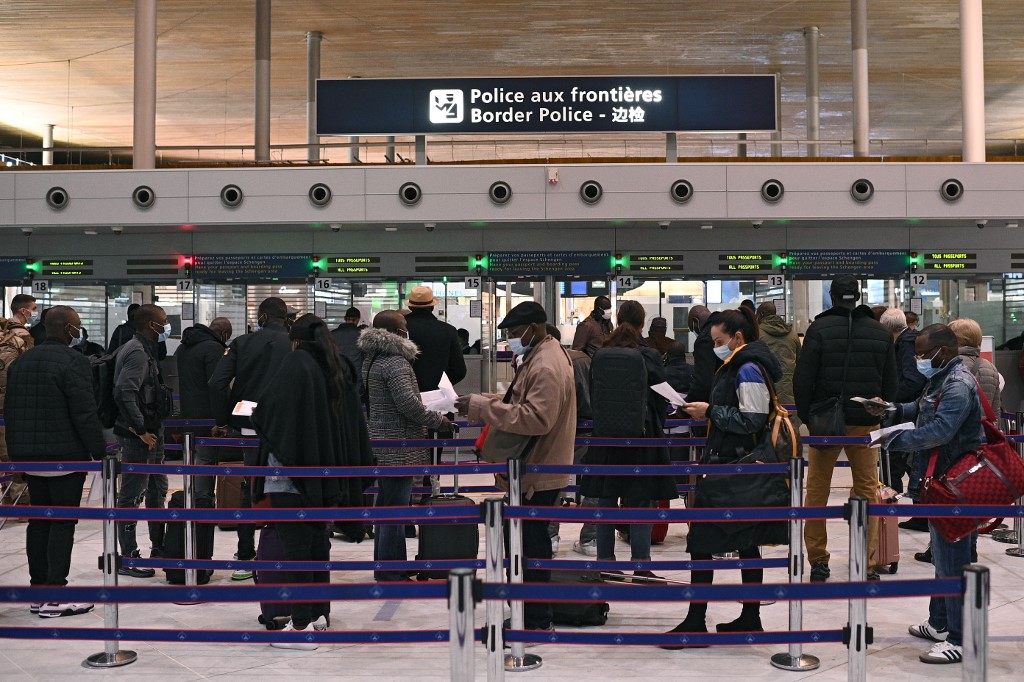 Travellers prepare their documents as they queue at the immigration desk of the Charles-de-Gaulle international airport, on February 1st. Photo: AFP

Only urgent reasons for travel are accepted and border police require written proof before allowing passengers to board, as Toure, a Malian national, found out when he tried to leave France for Bamako without the necessary document.

“I said that my mother, whom I hadn't seen in a while, was ill but they told me I needed proof,” Toure, who withheld his last name, told AFP in the 2E terminal at Paris's main airport Roissy-Charles-de-Gaulle.

After being turned away Toure, who works for a French public works foundation, managed to get hold of his mother's doctor in Bamako who sent him a barely legible note by WhatsApp. He tried again, and this time was waved through.

EXPLAINED: Who can travel after France closed its non-EU borders?

By curbing international travel, the government hopes to get a better grip on the circulation of the coronavirus and its recent variants, which have been spreading at a fearsome pace.

'There could be sanctions' –

“The idea is to limit the outbound-inbound loops between France and abroad,” Julien Gentile, head of the border police for the Roissy and Le Bourget airports, told AFP.

Passengers must first show the required documentation at airline counters during check-in, but some carriers have already fallen foul of the authorities for failing to stop passengers without a Covid test.

“If airlines fail to meet the requirement in terms of health checks, there could be sanctions,” a transport ministry spokesman told AFP.

Last week, Ethiopian Airlines was banned from flying to France for four days after failing to check passengers for tests, and the government warned all carriers that failing to comply with the requirements could eventually lead to a temporary, or even indefinite, ban.

Passengers must also present a valid written excuse at border control, where agents were no longer allowing automated passport scanning but instead checked each document, as passenger queues grew longer.

The time needed per passenger can easily reach five or 10 minutes, compared with just seconds usually, as agents try to determine what is an “urgent” motive and what isn't.

“If you want to visit the grave of somebody who didn't die recently you can't go, even if that may seem cruel,” said Cecile Aerdeman, head of the airports' border service. “You will have to wait until the health situation
changes.”

READ ALSO: When will Americans be able to travel to France again?

President Emmanuel Macron has decided, for now, not to impose a third national lockdown, choosing a different path than France's neighbours such as Britain and Germany.

Health Minister Olivier Véran said Sunday that the number of new coronavirus cases had barely increased over the past week, while other indicators – such as traces of the virus detected in waste water – were also reassuring.

The French government put in place a strict nighttime curfew after a second lockdown ended in December, while deaths of around 250 a day are currently less than a quarter of the number in Britain or Germany.