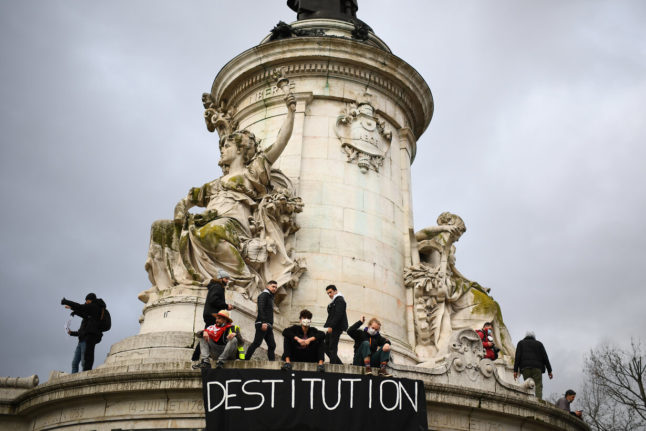 Demonstrators at the Monument to the Republic in Paris on Saturday 30th January 2020. Photo: AFP

A broad cross-section of protesters turned out in dozens of French cities, including activists from the anti-government “yellow vest” movement and others calling to protect the cultural sector.

“I have two reasons for coming today — the comprehensive security law and also to support culture,” said Kim, a 24-year-old civil service intern.

“Lots of stores are open, the metro is packed, yet cultural sites are closed, even though we can apply protective measures” against the coronavirus, she said.

Also among the protesters were young people calling for the right to hold rave parties such as one in Brittany that attracted 2,400 at the start of the year.

The demonstrators are protesting draft legislation that would ban filming police activities, which the ruling LREM party of President Emmanuel Macron has said it would rewrite.

But people are also protesting the use of surveillance tools such as drones and pedestrian cameras.

Footage of white police beating up an unarmed black music producer in his Paris studio on November 21 has fuelled anger over the legislation, condemned by many as signalling a swing to the right by Macron.

The number of protesters who turned out on Saturday was limited by bad weather and Covid-19 restrictions.

In Paris, the large Place de la Republique was half full, AFP journalists reported, while around 3,000 people had gathered in Montpellier, southern France. Hundreds turned out for similar rallies in other cities.

The government argues that the proposed law is needed because police officers have become targets of attacks and calls for violence against them on social media.

But French media say a “new national plan of law enforcement” is being used to limit media coverage of demonstrations.

The proposed security law, which has already been approved by the National Assembly, is to be examined by the Senate, France’s upper parliamentary chamber, in March.