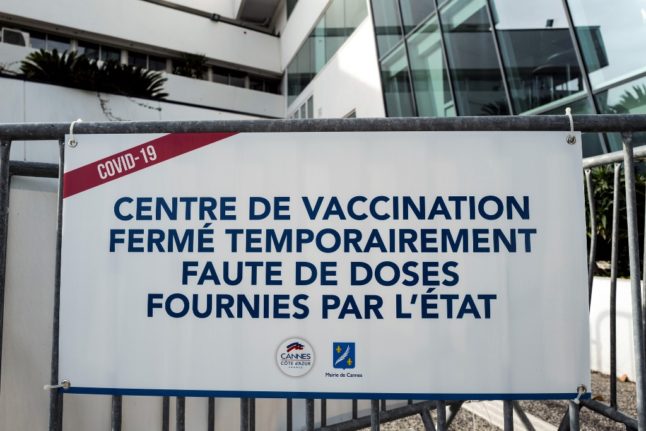 The sign reads 'vaccine centre temporarily shut because of a lack of doses provided by the state'. Photo: AFP

In recent days some health authorities have announced that appointments for the first dose of Covid vaccines will be temporarily halted.

The halt is not nationwide and affects only certain areas, depending on their vaccine supplies.

So far the regional ARS health authority in Hauts-de-France has announced that all appointments scheduled up to and including Tuesday, February 2nd, will be postponed until March. The announcement was made on Thursday so covers five days' worth of appointments. Only appointments for the first dose of the vaccine are affected by this.

Across the rest of the country there have been several cases of single vaccine centres running out of doses and having to put appointments on hold, but no regional announcements.

If your appointment is affected, you will be notified by authorities, otherwise you should turn up as planned.

The reason for the postponements is a supply issue, with not enough doses to fulfil all appointments.

However as the chart below shows, France has a higher number of doses of the vaccine in stock than the number of appointments given (the grey box represents doses in stock, the blue line shows injections given).

The reason for this apparent disparity is the second dose.

All the Covid vaccines approved so far require two doses before the patient is protected. As countries battle to secure sufficient supplies of the vaccine, shortages mean that health authorities have to make a choice – give as many people as possible the first dose and then delay the second dose until supplies become available, or limit the number of people getting the first dose so that they can all receive the second dose on schedule.

Some countries, including the UK, have gone for the first option and delayed the second dose for up to 12 weeks.

However the French health minister Olivier Véran announced earlier this week that France would be sticking with the manufacturer's recommendation of 3-4 weeks between the first and the second dose, which means vaccine centres need to calculate their stocks based on everyone getting two doses.

As has been widely reported this week, there has been an issue with AstraZeneca apparently being unable to supply as many doses of their vaccine as planned. However this vaccine has not yet been approved for use in Europe and France had always planned to use only the Pfizer BioNTech and Moderna vaccines until March.

France has been receiving 500,000 doses a week of the Pfizer vaccine since the end of December and if all goes according to plan this will rise to 1 million doses a week from March.

Problems with AstraZeneca could, however, affect the planned expansion of the vaccine programme to the general population from the spring and ultimately France's goal of having vaccinated everyone who wants it by August.

In the short term, the Paris regional health authority says it will be able to carry out 72,000 appointments in the first week in February, of which 45,000 will be first dose appointments. This will rise to 75,000 in the second week of February while the third and fourth weeks will see 86,000 and 93,000 respectively, including people whose appointments had been rescheduled from the start of the month.

As of Thursday, France had given 1,349,000 injections including 117,217 in the previous 24 hours. After a very slow start, the vaccine programme has speeded up considerably in recent weeks and is now averaging around 110,000 people a day, with increases planned throughout the next few months (supplies permitting).

In the longer term, French pharma giant Sanofi has announced that, since its own vaccine will not be ready for months, it will begin to manufacture doses of the Pfizer BioNTech vaccine. The deal signed is for 125 million doses, although these will of course not all be for France.