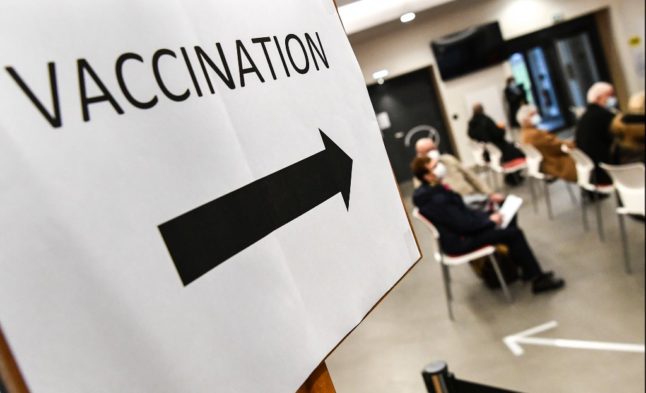 On December 27th France administered its first Covid-19 vaccine, to a 78-year-old woman named Mauricette who lives in one of Paris' northern suburbs.

A week later just 1,000 people had been vaccinated and anger in France at the slow start was reaching boiling point.

Three weeks after that, vaccinations are being done at a rate of more than 100,000 a day and the January target of 1 million people vaccinated was reached early.

Here's a more detailed look at what is happening

However the French health ministry, in common with many others, does not break data down into first and second dose injections, so it is not possible to say how many people are 'vaccinated' with both doses, although we do know that Mauricette has had her second injection.

Data analyst Guillaume Rozier puts the percentage of the population vaccinated between 0.88 percent and 1.77 percent – leaving another 58 percent to go before reaching the population immunity figure of 60 percent.

READ ALSO Who is the 24-year-old behind France's Covid graphs?

The chart below shows injection numbers failing to get off the ground for the first week before beginning a gradually increasing climb. The blue line represents injections given, the grey shows the number of doses of the vaccine that France has received.

However, the vaccination programme has barely begun or not begun at all in several of France's overseas territories, so looking at mainland France only, the figure is 1.8 percent.

In terms of numbers of injections, the greater Paris region of Île-de-France has the highest, but the eastern region of Bourgogne-Franche-Comté had the highest percentage of people getting the injection with 2.64 percent. The earliest supplies of the Moderna vaccine were sent to eastern France, which has been hit hardest in the second wave.

There are now more than 1,000 vaccine centres open around the country, although some people report struggling to secure an appointment slot – health minister Olivier Véran said on January 21st that eight million people have booked a slot.

READ ALSO OPINION: Is France's vaccine programme a disaster? Not any more

As the pace picked up, France's health minister unveiled a revised vaccination timetable which would see – supplies permitting – everyone in France who wants the vaccine getting it by August.

The revised timetable has;

At present people eligible for the vaccine are; over 75s, people with serious underlying health conditions, health workers who are over 50 or have a medical condition and residents and staff in the country's Ehpad nursing homes. The next group – 65-74 year-olds – will be opened up in February although an exact date has not been given yet.

It has also been decided that France will not delay the second dose of the vaccine past the manufacturer's recommendation of 3-4 weeks, as some countries have done.

Of course France's plans depend entirely on supplies of the vaccine arriving, something that now seems in question after AstraZeneca apparently told the EU it could not fulfil its orders as planned.

The AstraZeneca vaccine has not yet been approved for use in France, so this will not have an immediate effect on French injections which are currently being done with Moderna and Pfizer BioNTech vaccines, but it is likely to affect plans for the acceleration of the programme in the months to come.

As well as the practical and logistical difficulties of mass vaccination, the government in France also had to content with the highest level of vaccine-scepticism in Europe.

However as the vaccine programme has gone on, subsequent polls have seen an increase in the number of people planning to be vaccinated, putting the percentage of people who intend to be vaccinated at nearer 50 percent.

This will surely go down as a case study in how to overcome scepticism in a distrustful rebellious nation (??): tell people who don’t want something that there isn’t enough of it to go round, and they will be in the streets queuing up for it pic.twitter.com/ED9kfv3e18

Some people have joked that the early shortage of vaccines was secret government reverse psychology – and that the best way to make French people want something is to tell them that they can't have it.

Experts however think that a more likely explanation is that increased information and certainty around the programme have persuaded those who were only mildly uncertain.

“There has been a tendency to think that those expressing a reluctance towards the (Covid-19) vaccine are anti-vaxxers and conspiracy theorists who would never accept getting vaccinated,” public opinion researcher Antoine Bristielle told The Local.

Of the vaccine sceptics, only some say 5-10 percent say they have decided they will definitely not get the jab.

To be convinced, those on the fence “need to see that the benefits of the vaccine outweighs the risk,” Bristielle said.

READ ALSO How worried does France need to be about its anti-vaxxers?