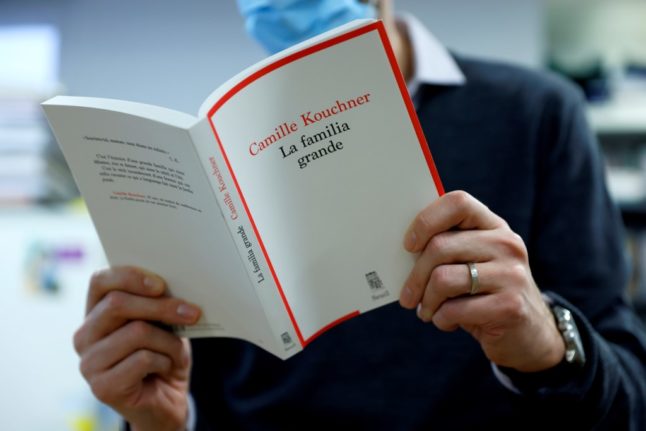 The book that has sparked a national conversation. Photo: AFP

The hashtag #metooincest has been one the highest trending topics on Twitter in recent days, while France's 'first lady' Brigitte Macron has called for a change in the law – so why are we all talking about this now?

The catalyst was a book, La Familia grande, in which author Camille Kouchner accused her stepfather Olivier Duhamel of sexually abusing her twin brother when they were 14. Her brother has not spoken publicly but is understood to be supportive of her decision to write the book.

The case grabbed attention because Duhamel has a high public profile as a political commentator, academic and general friend of the great and the good in French society.

In an interview with L'Obs, Kouchner said the book revealed to what extent Duhamel's group of leftist intellectual friends, some of them household names in France, knew what was going on.

“Of course, I thought my book might seem obscene because of my family's fame. Then I thought to myself, this is exactly what needs to be done,” she said.

While this is all shocking enough, the case attained a second level of attention when the intellectual Alain Finkielkraut, interviewed on TV about it, appeared to play down the seriousness of the allegations, musing about whether there was 'consent' and 'reciprocity' between the boy and his stepfather.

He is far from the only member of the French intellectual establishment who in recent years has appeared to trivialise allegations of sexual abuse, but these comments seemed to be something of a final straw for many people.

The Children and Families Minister Adrien Taquet summed up the mood when he angrily tweeted: “In what world do you live Alain Finkielkraut? Are you really talking about consent between a teenager and a family member? You maintain the silence and the feelings of guilt of the child by suggesting that some form of reciprocity is possible.”

Several members of the feminist collective Nous Toutes began to share their experiences on Twitter using the hashtag #metooinceste and within two days the tag had been used more than 10,000 times as people shared their own traumatic memories of abuse by fathers, stepfathers, uncles, mothers, grandparents and siblings in a determined effort to break the taboo around speaking about incest.

Incest is a hugely-under reported crime, but some polls put the number of people who are victim of it as high as one in 10 people.

The sexual abuse of minors is of course not a new issue in France, and several other high-profile figures have spoken out in recent months.

Publisher Vanessa Springora, in a book published in January last year, accused prize-winning writer Gabriel Matzneff of abusing her while she was a minor, while film star Adele Haenel in November 2019 accused director Christophe Ruggia of sexually harassing her when she was in her early teens.

Haenel and other French actresses also in February last year walked out of France's Cesar awards after filmmaker Roman Polanski – who is wanted in the US for the rape of a 13-year-old girl in 1977 – won best director.

The original MeToo movement, which became widespread in the wake of Harvey Wenstein's crimes becoming public knowledge in 2017, received less traction in France than in many other places.

Although a French version of the hastag – #balancetonpoc or expose your pig – does exist, the movement did not gain the same level of acceptance in France and several high-profile figures spoke out against it, arguing that it went against French traditions of romance and gallantry.

This time appears to be different, with many high profile figures weighing in with their disgust at both the allegations and their reception.

But will this lead to anything more than talk?

Apart from an inquiry into the Duhamel case, many are also calling for changes to France's laws around consent and sexual abuse where children are concerned.

Alexandra Louis, an MP with the ruling LREM party, has proposed a bill to toughen the law on incest, which Citizenship Minister Marlene Schiappa has said she will support.

A commission to look at the law around incest was in fact already running, but with its conclusions not due until 2023, many are calling for swifter action.