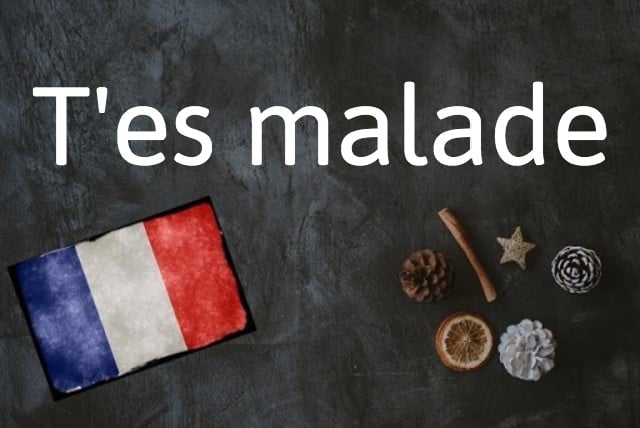 Why do I need to know t'es malade?

Because it's basic French teenager slang that has become widely used.

T'es malade directly translates as 'you're sick', but it's not a referral to an actual physical illness.

Malade here is more a referral to being 'sick in the head', and t'es malade is similar to saying 'are you mad' or 'are you crazy'.

It's a slang expression. T'es, an abbreviation of tu es, is how you often hear tu es pronounced. It's an inaccurate spelling, but many – especially young people – use it for chatting and text messages.

And, like most French slang expressions, t'es malade originated among young crowds.

T'es malade or quoi ? – Are you crazy or what? – is not uncommonly heard in lycées (high schools).

It doesn't need to be a question; T'est malade – you're a lunatic – works just as well.

T'es malade is used to explain disbelief, shock or disagreement. If your high school pal says 'let's skip second period and go home to game instead', you could say, t'es malade, ta mère flipperait si elle savait (you're crazy, you're mother would freak out if she knew).

Oddly, it can also be a compliment. Said in awe, il est malade ! can actually signify admiration or acknowledgement.

It doesn't need to be directed at 'you', anyone can be malade if you just change the conjugation of pronoun and the verb être. Vous êtes des malades ! – You're crazy!

As usual, and a bit unhelpfully, what exactly t'es malade means depends on the context and what tone the person speaking is using.

Tu vas faire tout ça tout seul ? T'es un gros malade en fait. – Are you going to do all of that by yourself? You're crazy.

T'as vu ce qu'il m'a achèté pour Noël ? Quel malade ! –  Did you see what he bought me for Christmas? What a lunatic!