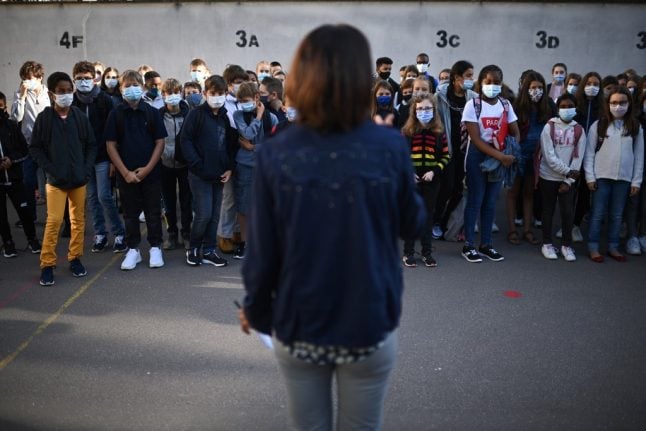 The French government has decided against closing schools to slow down the spread of Covid-19, but it will ramp up health rules and begin to mass-test teachers and pupils.

“It is essential to keep schools open,” French Health Minister Jean-Michel Blanquer said during a press conference on Thursday evening, in which he and other ministers outlined France's new Covid-19 health rules.

Several of France's neighbours have temporarily closed schools in a bid to halt the resurgence of Covid-19 in their countries, but the French government has repeatedly reiterated that closing schools last spring had too dire educational, social and psychological consequences on pupils for it to be repeated unless there was absolutely no choice.

Instead, the education minister said, the government would roll out a mass-testing scheme in schools, testing up to one million pupils and teachers each month.

“Every time there are three cases (discovered), a screening team will be sent to the premises,” Blanquer said, but he did not mention any changes in the rules on when classes or schools would close in the case of an outbreak.

At present, individual classes only close at the discovery of three Covid-19 cases in one class, a threshold that Jean-François Delfraissy, President of the advisory Scientific Council, said earlier this week should be lowered to one single case.

Outlining the new testing protocol, the health minister said earlier in the day that children as young as six years old would be tested, “everywhere it makes sense” to do so.

“Even if the circulation of the virus remains relatively under control, we must make a few changes,” he said.

“We knew this was a weak link in the organisation, because this is where you take off your mask,” Blanquer said, referring to the shared meals in school canteens.

From now on, he said, there will be “no mixing” during lunch.

“We need to ease the pressure during mealtimes,” he said. “Pupils in the same class will eat together every day and at the same table.”

Primary and secondary schools were asked, if it was necessary and possible, to extend meal times to prevent overcrowding in the canteens. Those struggling to ensure there was no mixing could introduce takeaway schemes as a last resort, the education minister said.

The government announced that all indoor sports were temporarily suspended. This includes out-of-school activities.

High schools (lycées) will maintain what Blanquer called a “hybrid mode”, which means they could continue a partial homeschooling of their pupils for now.

High school pupils were supposed to fully return to class on January 20th after maintaining a partial presence since the second lockdown entered into effect on October 30th.

However, pupils in terminale (third and final year) would have to be present “as much as possible”, the education minister said.

First-year university students will be authorised to return to their courses on-site, but with reduced numbers of participants, from January 25th.