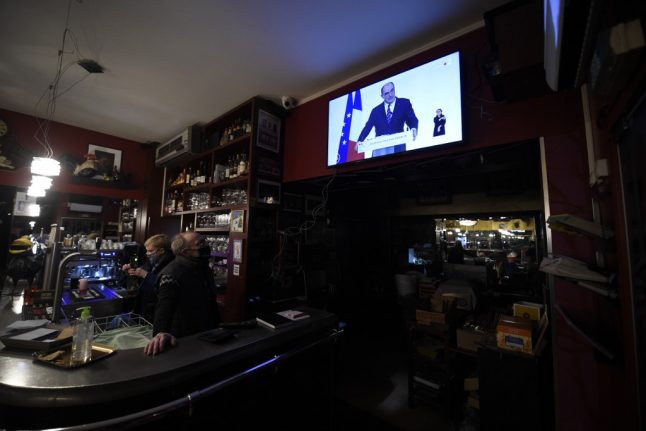 Prime Minister Jean Castex once again be updated the nation on the health rules. Photo: AFP

The 6pm curfew would begin on Saturday and will remain in force for at least 15 days, Castex told a news  conference.

“Our situation is under control compared to our European neighbours but fragile because the virus is still circulating actively throughout the country,” the PM said.

He added that there was also an additional element of danger with the emergence of new, more contagious variants of the virus.

“The situation is still worrying,” he added, outlining that France now registered a weekly average of around 16,000 new Covid-19 cases per day and that hospital patient numbers, while not rising, had plateaued at a  “high level”. 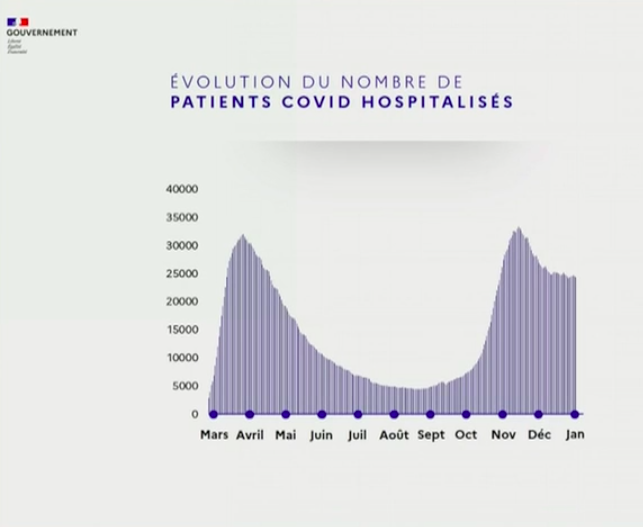 The number of Covid patients in hospital in the first and second waves. Graphic: Health ministry

“The spread of this new variant of the virus remains limited, but. . . it could gain in strength,” he said.

The whole of France is already subject to an 8pm to 6am curfew, but the earlier curfew had been brought in for 25 départements in eastern and south-eastern France where case numbers rose sharply after Christmas.

Castex said infections were now rising faster in the west of the country than the east. Covid-19 rates in départements subject to a 6pm since January 2nd were rising “two to three times” lower than in the rest of the country, the PM said.

As with the 8pm curfew, travel outside the home during curfew will only be allowed for essential reasons.

Shops and businesses open to the public must close at 6pm, but people will be allowed to stay at work later and travel home – a large number of French offices usually work until 7pm.

People will also be allowed to pick up children from school or crèche after 6pm, although an exemption certificate, available on smartphones, will be needed for all these trips.

Breaking curfew attracts a €135 fine for the first offence, rising to €3,750 and six months in jail for three offences within 30 days.

The prime minister ruled out a third lockdown for now and did not impose localised lockdowns as some local authorities had requested.

However he stressed that, if the curfew did not succeed in slowing down the spread of the virus, “we must prepare for another lockdown.”

“If the health situation sharply deteriorates in the coming days, we will immediately impose another lockdown,” he said.

Schools will remain open but with reinforced health rules and the suspension of all indoor sports and activities. School canteens will also remain open but pupils from different classes would not be able to eat together.

A mass testing programme for schools was announced, with the aim of testing 300,000 pupils and staff per week, one million a month.

The Prime Minister also tightened up border controls, saying that all arrivals from outside the EU (including the UK) will now have to present a negative Covid-19 test before boarding transport. On arrival in France they will need to self-isolate for seven days and then take a second test.

On the subject of vaccines the PM said over a million people in France will have received the jab by the end of the month.

From Friday, people in eligible groups will be able to book an appointment online or over the phone to be vaccinated while from January 18th – anyone over 75 or with serious underlying health conditions whatever their age, will be eligible for the vaccine from this date.

France will open 700 vaccination centres throughout the country by the end of the month.

Castex also defended the decision to prioritise vaccines for the elderly and health workers, instead of trying to vaccinate as much of the general population as soon as possible.

“The sooner we can vaccinate the most vulnerable, the sooner our hospitals will be spared the risk of being overwhelmed,” he said.

Covid-19 case numbers in France have been showing a slow but steady rise in recent weeks and on Wednesday it registered 23,852 new cases.

This is far from the 50,000 new cases a day recorded when France enacted its second lockdown at the end October, but the rise is still worrying health officials – especially when coupled with fears over the new variant of the virus first discovered in the UK which is believed to be more infectious.

France is also in a markedly better position than many of its neighbours – daily death tolls in both the UK and Germany have topped 1,000 recently while France on Wednesday recorded 232 Covid-related deaths. 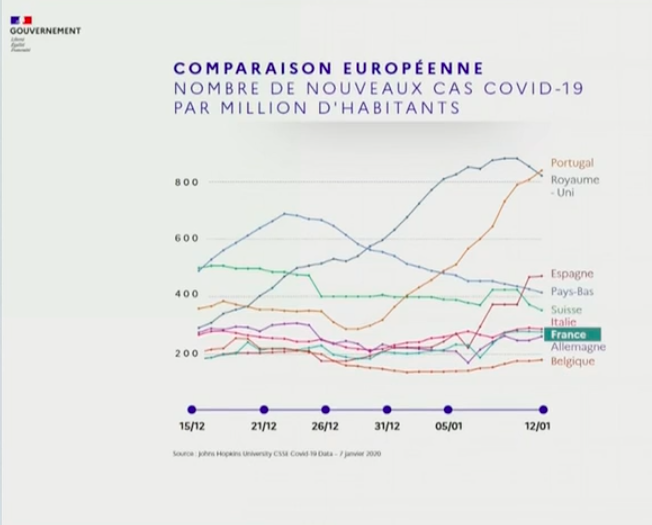 Since the announcement of the variant anglais of the virus there have been strict controls on travel from the UK, with travel only allowed for essential reasons and everyone needing a negative Covid test to enter France.