Two more French départements have introduced an earlier curfew in a bid to halt the rising spread of Covid-19 across the local area.

Residents in the départements Drôme and Var, both in the southeast of France, will have to stay home between 6pm and 6am as of Tuesday January 12th, when the new rules entered into effect.

A total of 25 départements were, as of that date, subject to an earlier 6pm curfew. An 8pm to 6am curfew is in place across the rest of the country, which has been imposed since France lifted its second lockdown on December 15th.

Faced with an expected post-New Year spike in Covid-19 cases and the new threat of the more contagious virus variant first discovered in the UK, the French government toughened the curfew rules in 15 of its 96 mainland départments on January 1st.
READ ALSO: Why this is a crunch week for Covid-19 restrictions in France
Another eight départements were added to the list this weekend and on Tuesday the départements Var and Drôme followed suit.
The rest of the country remains subject to an 8pm and 6pm curfew.
The map below shows where the earlier curfew applies as of January 12th. 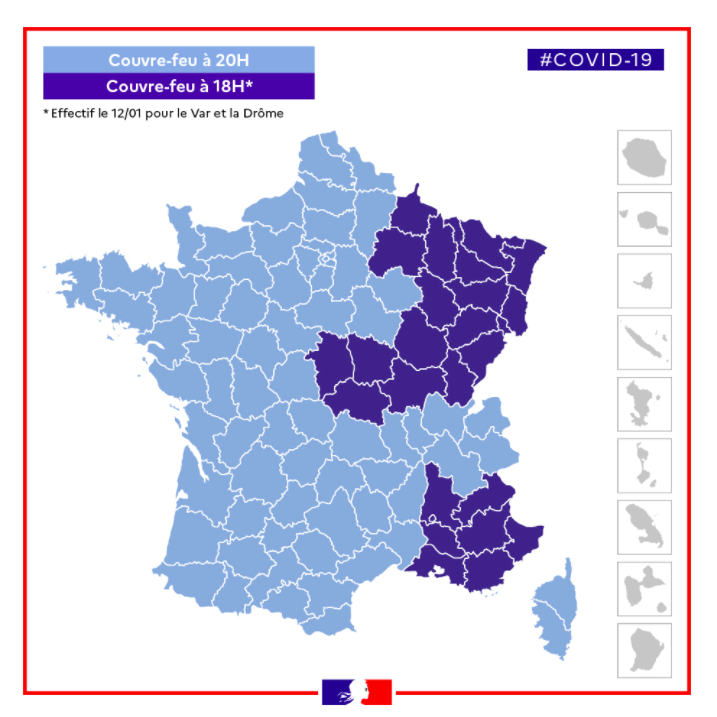 The full list of départements subject to the 6pm curfew is:

From January 12th: Var and Drôme.

According to French media reports, the government is considering tightening restrictions further in order to prevent a new spike in infections.

While the Prime Minister Jean Castex said he couldn't rule out a third lockdown, which would confine people to their homes once again, the government is also reported to be considering imposing the 6pm curfew nationwide.

Further announcements are set to be made this week, which is considered crucial in terms of infection rates and the subsequent action the government might take. The nationwide incidence rate in France has risen to 191 cases per 100,000 people with positivity rates of tests also rising again.

Under the rules of the curfew people must remain home and can only be outside their homes for essential reasons such returning from work or health emergencies.

Most of the areas subject to an earlier curfew are in the east of France, which has been disproportionately hard hit by the virus.

But the whole country has seen an increase in viral activity in January. Authorities have reported that the weekly average of daily new Covid-19 cases have increased from around 13,000 in late December to some 18,000 currently.
The incidence rate, the number of positives per 100,000 inhabitants over the past seven days, has surpassed 250  in the départments with a 6pm curfew.
However the incidence rate has reached 250 in most of the country – a sign that the virus is regaining speed, according to French data scientist Guillaume Rozier.

Rozier, who keeps track of the virus in France on his Twitter account CovidTracker, said the incidence rate spike “makes it possible to conclude that the virus is now more intense than before Christmas.”

The French government is holding a string of meetings this week to determine whether or not to enact stricter measures.

“This week we're really going to get into the tough stuff,” an unnamed Health Ministry official was quoted as saying in the French press, adding:

“If there are important decisions to be made, it will be now.”