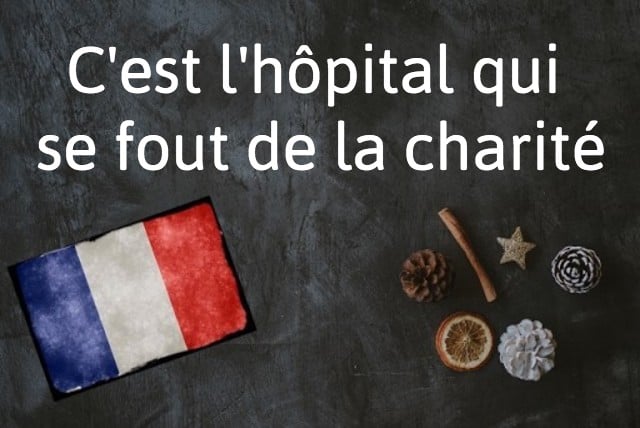 Because it's an excellent snarky retort during an argument, be over household chores or geopolitical disputes.

Its actual meaning will seem a bit counterintuitive, at least for those not familiar with centuries old French medical history.

C'est l'hôpital qui se fout de la charité means that someone is criticising, mocking or ridiculing someone else for a flaw that they have themselves.

The English equivalent is 'the pot calling the kettle black' (because a cooking pot is usually more battered and stained than a kettle).

Back in the 12th century, an hôpital was a religious place dedicated to charity. Poor people and others in need could come to the hôpitaux to seek help and compassion. (In Latin, hospitalia means “guest room”.)

A few centuries later, in the 1800s, hôpital became a referral to actual medical establishments, which generally were run by religious orders.

As 'hospital' and 'charity' were one and the same thing, a hospital that mocks charity was therefore mocking itself, which is the core of the expression today.

A recent article in the French newspaper Canard Enchaîné is useful to illustrate the expression.

Titled “Sans humour British”, the Canard Enchaîné article, said the UK's request had “bien fait marrer” (cracked up) Macron's entourage, seeing as British media and politicians have not exactly been treading lightly when characterising their French counterparts. The UK was acting like a hospital mocking charity.

Say your friend is having a go at you for arriving a few minutes late to your appointment, but usually they are the one to be notoriously late. You may exclaim C'est l'hôpital qui se fout de la charité – Talk about the pot calling the kettle black.

Or say your partner is nagging you for not having picked up your dirty socks from the floor, but you both know you were the one to vacuum every room in your home a couple of days back.