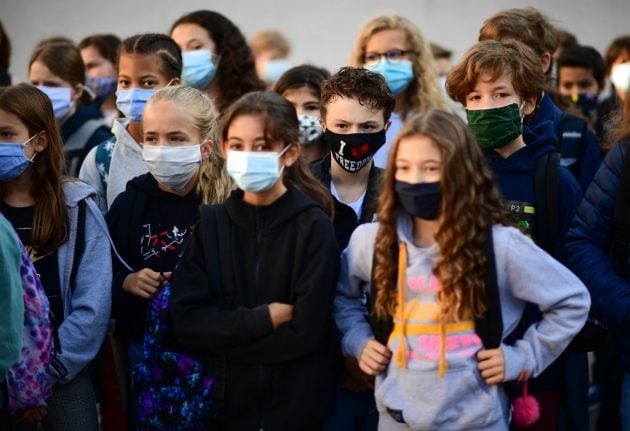 January 4th marked the return to school in France after a Christmas break where families across the country got together for the first time in a long time, following weeks of lockdown.

The period of holiday socialising will likely cause a future spike in Covid-19 numbers, scientists have warned.

But despite pushing back the dates of reopening not only restaurants, bars, but also cinemas, theatres and other cultural establishments, President Emmanuel Macron’s government decided against keeping children at home.

“The situation has shown that there was no particular infection in schools,” said Education Minister Jean-Michel Blanquer on December 20th.

Since schools reopened in September, the government has reiterated the message that keeping children in school was safe, both for the children themselves and their families.

Other European countries – albeit ones that are currently in a worse Covid situation than France – have decided otherwise. The UK, Ireland, Germany, Italy, Austria and the Netherlands all have delayed returning children to the classroom.

So is France different, and – if yes – why is that?

1. What we know about children and Covid-19

“Children can be infected and infect others, so reopening schools means increasing the risk of infection,” Pascal Crépey, an epidemiologist at the Ecole des Hautes Etudes en Santé Publique, told The Local.

While research seems somewhat divided on this point, it is the opinion of France’s state health council, Haut Conseil de la Santé, that children are neither prone to become seriously ill from Covid-19, nor are they likely to infect adults.

The Council's stance is based on scientific findings that that young children have lower viral loads. This does not mean they are not contagious when they carry Covid-19, but it means they unlikely to develop severe forms of the virus.

Scientists in the UK recently published a report that backed this up. It said up to 70 percent of children infected with Covid-19 could be asymptomatic, which means they could have the virus without showing any symptoms.

Professor Martin Hibberd of the London School of Hygiene and Tropical Medicine told the Guardian that the proportion of asymptomatic Covid-19 cases was “probably more like 50 percent for those in secondary school while for boys and girls in primary school, around 70 percent may not be displaying symptoms even though they have picked up the virus”.

Hibberd agreed that this could mean that children were also less likely to pass the virus on to others.

“It's a real possibility but we cannot yet be sure,” he said.

2. What we learnt from the second wave of Covid-19

Among the evidence that backs this up are the differences in the first and second waves of Covid-19 infections in France. During the first wave of the virus, the country kept schools closed throughout spring, only returning small groups of pupils back to class in June. Attendance was not mandatory, and anxious parents could continue to homeschool their children.

In September the government changed its strategy and reopened all schools with compulsory attendance. Too many children had fallen behind during the first lockdown, Macron said during a speech in which he stressed the crucial importance of education in reducing social inequality in France.

“It was kind of working,” Crépey, who has studied the impact of lockdown, said about the government's strategy to reopen schools. “We did not see a massive number of clusters in schools and it did not seem to impact the lockdown itself.”

In fact, the less rigid lockdown this autumn had roughly the same effect as the strict lockdown in spring in terms of bringing cases down to manageable numbers.

The below graph shows how the number of Covid patients in hospital fell sharply once both lockdowns were introduced. Hospital numbers is a more accurate comparison than case numbers, since testing has ramped up hugely between the first and second waves.

While schools reopened bars, cafés, restaurants, gyms and cultural spaces like cinemas and museums all remain closed and – until December 15th – people were only permitted to leave home for essential reasons.

But France did not simply reopen schools without restrictions. The government put strict health rules in place, with teachers and children over 11 years old having to wear protective face masks in school at all times (this was later changed to all children aged six and over).

READ ALSO: What you need to know about France's Covid-19 health rules in schools

3. What we know about Covid-19 clusters in schools in France

In his interview just before Christmas, Blanquer said “less than 0.2 percent of primary, secondary and high schools” had closed since the beginning of the school year on September 1st, which he called “a fine victory of education”.

Dozens of schools and hundreds of individual classes closed in France shortly following term start in September after they reported to have cases of Covid-19 among their pupils or staff. After the government raised the bar for closing a en entire school or class, the number dropped.

The most recent breakdown of Covid clusters in schools – in a weekly report from Santé Publique France published on November 12th – schools and universities accounted for 1,280 clusters out of 9,055 in total.
This was less than nursing homes for elderly (2,006) and private businesses (1,928), but more than health establishments (1,059), families (218) and public and private gatherings (445).
However France has 7,200 Ehpad nursing homes and 61,510 schools, according to government data.

In the same report, Santé Publique France said a November spike in Covid-19 cases in the age group 2-14 was “probably linked to the return to school after the school holidays” that autumn.

One of the main criticisms regarding Covid-19 transmission in schools is that there is little research breaking down the exact level of spread in educational establishments in France. In order to get that, there would need to be mass testing of pupils at random, in order to reveal the asymptomatic cases.

How big of a role schools play in spreading the virus has been rendered more uncertain by the new strain of Covid-19 virus discovered in the UK – later found to have spread to France and several other European countries – which scientists say is spreading more among younger parts of the population.

In a recent report, scientists at the Centre for Mathematical Modelling of Infectious Diseases at the London School of Hygiene and Tropical Medicine warned that a national lockdown imposed in England in November was unlikely to prevent an increase of infections “unless primary schools, secondary schools, and universities are also closed”.

Other scientists too have warned of the risks of reopening schools as Covid-19 rates are on the rise across Europe.

Antoine Flahault, a renowned epidemiologist and director of the Geneva Institute, which monitors Covid-19 in the world, warned European countries against repeating the same mistakes as in January.

“Let's not reopen schools in the beginning of January,” he wrote on Twitter. “Let's vaccinate, vaccinate first. Let's accelerate the vaccination.”

But the decision to reopen schools in France was calculated, Crépey said.

“One of the reasons schools are closed in the UK is that they are absolutely not in the same epidemic situation as us. The UK is facing a massive resurgence.”

“For the moment, France can afford to keep schools open, from an epidemic point of view,” he said, adding:

“Of course, if the situation worsens it could become necessary to close schools again.”