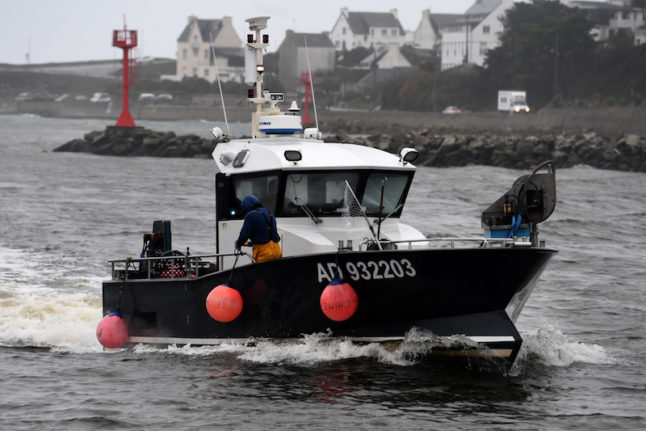 The last-minute deal between the EU and Britain on their trading relationship now that London has left the bloc, which included European fishing rights in British waters, has perhaps saved the industry in France from even choppier waters.

But as they plan to put out to sea after January 1 when Britain will no longer be part of the EU single market, French fishermen complain they are still lacking full clarity on their future rights.

“We are getting ready to set sail, but we do not know where to,” Emmanuel Le Saint told AFP aboard his white and blue trawler, moored not far from the fish market of Le Guilvinec.

Le Guilvinec is France's third fishing port after Boulogne-sur-Mer in the north of the country and Lorient in the west.

“We do not really know if we will be going towards British or French” waters, he added, as his crew worked to refuel the vessel.”It's unclear, it's completely unclear,” he said, his hands buried in the pockets of his jeans as he stood in the port in the Finistere region of Brittany, fully exposed to the wrath of the Atlantic.

Fishermen are particularly worried about whether the British authorities will grant them the necessary licences in time from January 1 to enter their waters.

“Given that the English (fishermen) are themselves frustrated, they (the British authorities) are not going to do anything to make our life easier”, said Jacques Pichon, director of the La Houle group which has 10 trawlers and accounts for approximately 20 percent of operations at Guilvinec market.

“At first glance (the agreement) is less unfavourable than we could have feared,” he acknowledged. But he warned: “The fact that the British did not get everything they wanted, and that other European fishermen had to concede more than us in the agreement, may have consequences.” Under the last-ditch agreement clinched after marathon talks on Christmas Eve, the EU will cede around 25 percent of the value of hauls fished in British waters by European fleets.

After a transition period of five-and-half years, rules governing mutual access to fishing zones will be negotiated annually.

Ludovic Le Lay, head of the Hent Ar Bugale fleet, three of whose six boats regularly fish in British waters, expressed particular concern about the annual negotiations. Catch limits “can be changed from one year to the next”, he said, worrying about the impact of the agreement “going forwards”.

What will become of fishing?

For the French industry, fish caught in British waters account for 20 percent of the total annual value.

“It's a leap into the unknown in any case, because we are losing overall 25 percent of the value of the catches made in British waters,” said Soazig Le Gall-Palmer, head of the Bigouden group, which runs 11 boats.

Le Gall-Palmer, who heads a regional producer's organisation that groups 700 vessels, noted the fact that the reduction has not been “distributed equally between species and areas or between the nations of the European Union”.

Also concerned about the annual renegotiation, she said: “We will be in doubt every year. Every single year we will have to wait for the agreements.”

Veteran fisherman Thierry Monfort, just back from a two-week trip into Irish waters for Bigouden, said the new uncertainty was just another blow to the industry.

It is already being squeezed by environmental concerns about overfishing as well as recruitment problems, with fewer young people keen to enter the arduous profession.

“By 2026, I am going to be retired and it won't concern me,” said Monfort, referring to the year following the end of the fishing transition period. “With the restrictions on fish, on species, on everything, you wonder what will become of fishing”.