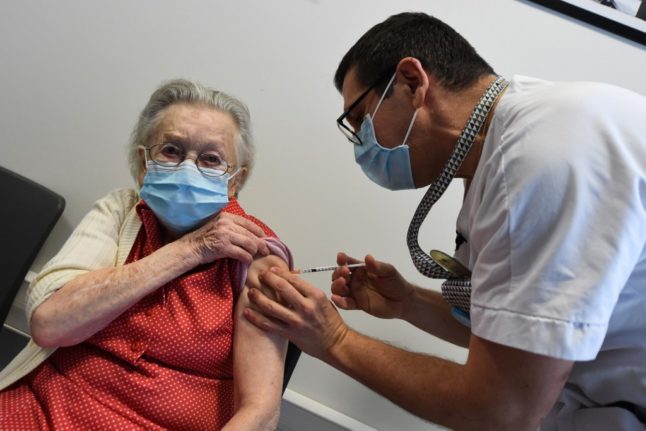 According to the poll by Ipsos Global Advisor in partnership with the World Economic Forum, just 40 percent of French want to take the vaccine.

This puts it behind even other laggards like Russia on 43 percent and South Africa on 53 percent, let alone those countries where eagerness to take the vaccine is high such as China on 80 percent and Britain on 77 percent.

Truly despairing, in French care homes elderly people are refusing the vaccine. In this one in Dijon, only 70 of 250 elderly residents agreed to be vaccinated. https://t.co/58b2vcJaAh

Fear of side effects is the reason most often given for not wanting the vaccine, according to the poll.

READ ALSO Why are the French so anti-vaccine?

France has historically high levels of vaccine scepticism, although vaccine rates do not always reflect this in. In 2019 10 million people got the flu vaccine, roughly one in seven of the population, while in the first week of the 2020 flu vaccination campaign 5 million people rushed to be vaccinated, leading to many pharmacies running out of jabs.

A total of 11 childhood vaccines are compulsory in France, with children needing a vaccination certificate to be enrolled in school, but president Emmanuel Macron has ruled out making the Covid jab compulsory.

A new health law that proposed restricting access to services such as public transport to people who are not vaccinated has been paused after protests, health officials said it was not intended to target the Covid vaccine and have paused it until the vaccination campaign is complete.

The issue of vaccine scepticism is a difficult one for France, with the government wanting to avoid being seen to pressure people to have the jab.

Health minister Olivier Véran has previously said: “As well as vaccinating against Covid we must vaccinate against fear and that too is my responsibility. I believe the best way to fight fear is with good information.”

France began its vaccination campaign on Sunday along with most of the rest of the EU, targeting residents in care homes first.

However fewer than 100 people were immunised in the first three days in France, a far slower pace than in neighbouring Germany, let alone in the US or UK.

Rebuffing criticism on social media, a health ministry official said: “We have not set out for a 100-metre sprint but a marathon.”

“The start is cautious but we will step it up and vaccinate on a very wide scale,” the official said, noting that the authorities face a “very strong scepticism on the part of the French population”.

The official said there was no problem with supplies, with 500,000 vaccine doses now set to arrive in France every week.

Responding to a question on France 2 TV channel, Véran said there were at present no plans for French politicians to be televised getting the vaccine, pointing out that most politicians are not in the groups most at risk of developing severe symptoms of the virus.

The Ipsos Global Advisor poll was carried out in 15 countries online among more than 13,500 adults including some 1,000 in France.