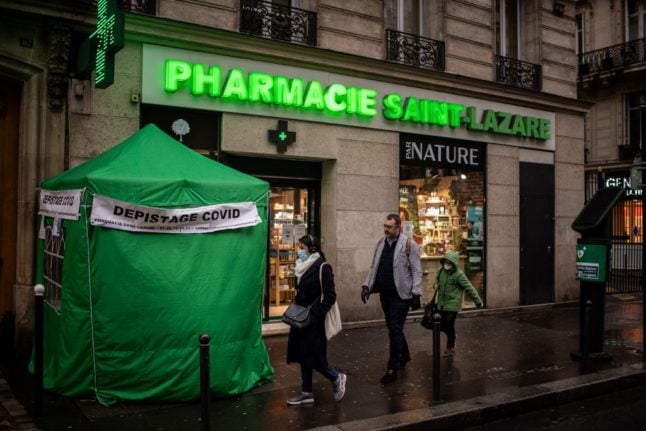 As France's Defence Council meets on Tuesday to discuss whether to reimpose lockdown, one of the options on the table is regional restrictions.

Tried without much success over the summer, regional restrictions are again being looked at because the health situation in certain parts of the country is dramatically worse than others.

READ ALSO What next for France after 'Christmas truce' on lockdown rules? On a national level, things in France don't currently look too bad. Daily case rates have been holding steady at an average of 10,000 a day, allowing for some fluctuations in reporting probably caused by the holidays. This is higher than the French government's target of 5,000 a day by mid December, but has also held at roughly the same level since the end of November.

The situation in intensive care – a key figure watched carefully by health officials as it gives an indication of both how the health system is coping and death rates to come – is also stable with 2,703 Covid-19 patients currently in intensive care, representing 53.3 percent of the country's capacity.

Set against this, however, are two aspects that are worrying health chiefs.

The first is the effect on case numbers of people travelling and spending time with friends and relatives over Christmas. Officials fear a repeat of the 'Thanksgiving effect' seen in the USA when cases spiked after the Thanksgiving holiday.

Testing in France saw a big jump in the week before the holidays – up by 74 percent on the week before – but this was largely among people with no symptoms, probably getting tested as a precaution before travelling to see vulnerable relatives. The full effect of the holidays won't be seen in the health data for another week.

The second thing causing concern is the situation in certain regions of France.

The government therefore has a choice – impose extra restrictions on areas where the situation is bad, or return the whole country to tighter restrictions to try and stop the spread out of the worst affected areas.

Three areas have been singled out as being of particular concern – the regions of Grand-Est and Bourgogne-Franche-Comté in eastern France and the département of Alpes-Maritime which contains the city of Nice.

Health minister Olivier Véran said: “Three areas worry us: the Grand Est region, Bourgogne-Franche-Comté and the Alpes-Maritimes department, starting with Nice.” He added that he fears “an increase in hospitalisations in the coming days”.

Looking at the map below there is a marked east-west divide in France, with the eastern parts of the country showing significantly higher rates of infection and hospitalisation.

Several theories have been put forward to explain this, including the colder weather in the east that has forced people inside and the close proximity of countries such as Switzerland, Italy and Belgium that have higher rates of infection.

Some of the worst affected départements are ones on the border – Ardennes of the Belgian border, Jura and Doubs on the Swiss border and Alpes-Maritimes which sits on the Italian border.

The north eastern region of Grand Est was among the worst affected during the first wave in the spring, with the town of Mulhouse seeing one of the first outbreaks of the illness and subsequently becoming the site of a military hospital as its health services struggled to cope.

Worryingly, many cases were reported among the elderly, who tend to develop more severe symptoms. For people aged 65 plus, the incidence rate is 239 per 100,000.

On December 27th, the last day for which detailed figures are available, there were 2,990 Covid-19 patients in hospital, of which 292 were in intensive care, representing 60 percent of the region's capacity.

Just to the south of Grand Est lies the Bourgogne-Franche-Comté region, another one singled out by Véran as being of concern.

The regional health authority has also sounded the alarm about 'high pressure' on local health systems. Latest figures show 1,744 people in hospital with the virus, of whom 172 are in intensive care. This is approaching the total capacity for the region, which has begun to transfer some of the most seriously ill patients to other regions for care.

So far 275 patients have been transferred since the start of the second wave.

The département of Alpes-Maritime on the Italian border contains the city of Nice, which was badly affected over the summer and is again seeing high rates of infection.

The département is reporting a very high incidence rate of 293 per 100,000 people.

The mayor of Nice, Christian Estrosi is calling on the government to reintroduce lockdown, and also to make PCR tests compulsory for all passengers landing at Nice airport.

During the first wave and over the summer France's biggest and most densely populated cities both reported worrying levels of infection and severe pressure on health services.

As things stand at present, however, neither city is giving significant cause for concern – the infection rate in Paris is only slightly above the national average at 140 while the Bouches-du-Rhône département, which contains Marseille, is slightly higher at 159 but well below the levels seen in the eastern parts of France.