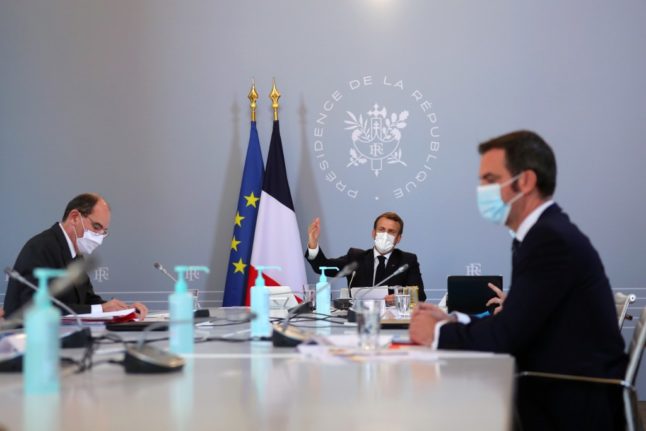 The Defence Council will meet on Tuesday. Photo: AFP

The French government has announced a meeting of the Defence Council, which deals with Covid-19-related restrictions, on Tuesday.

The Council, which is chaired by President Emmanuel Macron, will consider what steps to take next in the attempt to control the spread of the virus.

France's second lockdown was lifted on December 15th and people have been allowed to travel over Christmas to spend the holidays with family and friends.

The original plan was that following the lifting of lockdown, bars, cafés, restaurants and gyms would reopen on January 20th. But following rising case numbers, this now looks unlikely.

Here are some of the scenarios the Council will be considering.

At present the lockdown is lifted and all shops are open but many restrictions remain in place.

The country is under a strict 8pm curfew and all bars, cafés, restaurants, gyms, theatres, museums, tourist attractions and other cultural spaces remain closed.

Gatherings of more than 10 people are forbidden in public places, apart from demonstrations and at religious services, and anyone who can work from home is asked to do so. People are recommended, although not ordered, to keep gatherings in the home to a maximum of six.

Schools were – until the beginning of the Christmas holidays – open as normal and are scheduled to reopen on January 4th and all shops, hairdressers and service businesses are open.

There was originally a three-step plan to lift France's second lockdown – non-essential shops reopened on November 28th, lockdown rules were lifted on December 15th and bars and restaurants were scheduled to reopen on January 20th.

However case numbers, after seeing a sharp drop from 50,000 a day at the start of the lockdown to 10,000 a day by the end of November, then plateaued and have recently seen a slight rise. Health experts are worried about the 'Thanksgiving effect' seen in the USA when cases spiked after people travelled to spend the Thanksgiving holidays with friends and family.

At present cultural spaces like theatres and cinemas are due to reopen on January 7th followed by bars, restaurants and gyms on January 20th.

However the government has always been clear that these dates are dependant on the health situation and the original target of 5,000 cases a day to reopen bars is still some way off with daily totals of 12,000 recorded in recent days.

France's second lockdown – which ran from October 30th to December 15th – was less strict than the one in spring as schools remained opened along with many businesses.

But it seems to have been just as effective at slowing case numbers, which saw a very sharp fall after lockdown was imposed.

The government could opt to reimpose these restrictions, an option that health minister Olivier Véran said on Sunday could not be ruled out.

This would mean a return to the stay-home order with permission forms needed for any trips outside the home, a ban on socialising and a limit on trips out of the home for exercise. Health minister Olivier Véran says a third lockdown cannot be ruled out. Photo: AFP
“We will never exclude measures that are necessary to protect the public,” Véran told the Journal du Dimanche newspaper.
“That is not to say we have made a decision, but that we are watching the situation hour by hour.”
At present many French people are away from home visiting family, so if a second lockdown is imposed it could be delayed until Monday, January 4th when the new school year starts and most people will have returned home. Alternatively the lockdown could start earlier, but with a travel dispensation for people to travel home on the day they planned – as happened in October when the new lockdown was imposed during the Toussaints (All Saints) school holidays.

4. A mixture of the above

French media are reporting various scenarios that are a mixture of the three options, with some suggesting a stricter curfew or a reinforced order for people to work from home if possible.

There are also suggestions that restrictions could become regional, with the worst affected areas seeing tighter controls. Over the summer France tried a regional approach to restrictions, with badly-hit cities like Paris and Marseille being placed under curfew and bars ordered to close. In general, however, the regional approach was not very effective.

So what is the latest health situation in France? Looking at case numbers, these peaked at 50,000 new cases per day in October and fell sharply after lockdown was imposed, reaching 10,000 a day by the end of November. However the numbers then plateaued and from mid December saw a slight but noticeable rise.

Experts are concerned about the effect of large numbers of people travelling and relaxing health precautions over the holidays, but this effect will not appear in the health data for at least another week.

Daily health data is being produced over the holidays, but generally in France weekends and public holidays see low numbers followed by big spikes, so data over the next few days should probably be interpreted with caution. Another thing that may affect data is the high number of people who took Covid tests in the week before the holidays, as a precaution before travelling to see vulnerable family-members.

Data from December 27th shows 8,822 new cases and 175 deaths, although this likely to be under-reported.

The hospital situation is a lot less concerning than earlier in the year with 2,659 Covid-19 patients in intensive care, representing 52.3 percent of the country's intensive care capacity.

A first case of the new variant of Covid-19 first reported in the UK, which is said to be more infectious, has been reported in France.

At present travel within France is not restricted and travel into the country from within the EU is allowed with no quarantine required.

The exception to this is the UK – after the British government reported a new Covid-19 strain which it said was highly contagious France has imposed travel restrictions. Only certain types of travellers are permitted to enter from the UK and everyone needs to have had a Covid test – find full details of the UK travel rules HERE.

Travel into France from outside the EU remains heavily restricted to essential travel only, apart from the few countries that are on the EU's 'safe' list – full details HERE.