The phrase couvre-feu hadn't been heard much in daily French chat before 2020. Photo: AFP
The Local
[email protected]
@thelocalfrance


From new coinages to obscure vocabulary that became part of the mainstream, we have all learned some new French phrases this year. Julia Webster Ayuso looks back at some which are likely to remain useful well into 2021.

2. Gestes barrières – Hygiene measures. These are the new habits we have had to get used to this year: refraining from shaking hands or doing la bise, standing at a distance, regularly washing and sanitising our hands and wearing a mask. 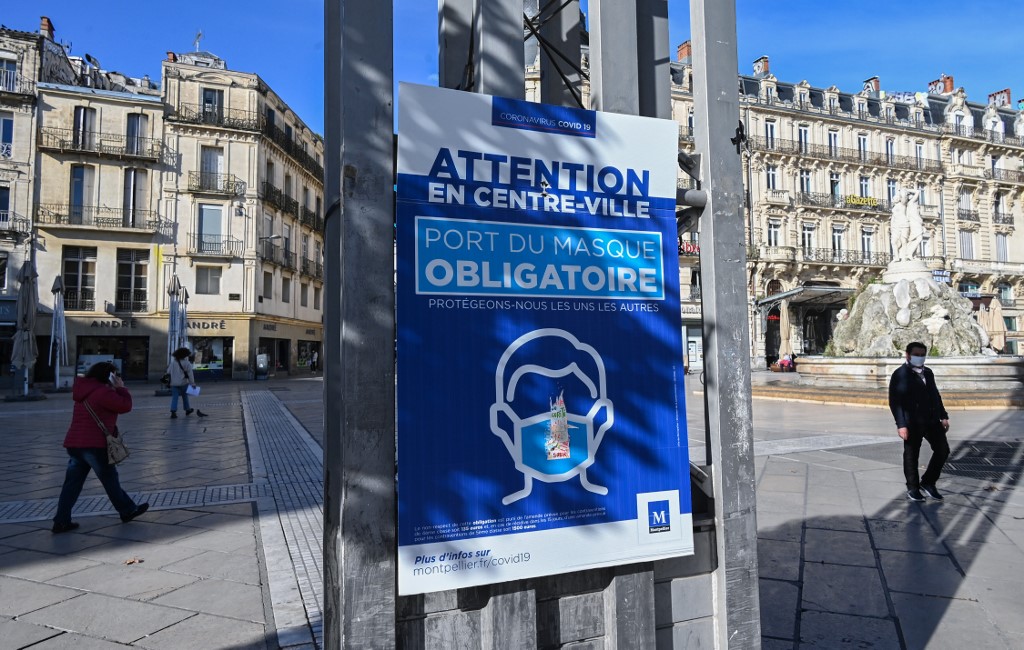 3. Isolement – Isolation. People testing positive for coronavirus, or travellers returning from high risk countries have had to self-isolate for 14 days.

4. Quatorzaine – this handy little portmanteau means a 14-day quarantine, a mashup of quatorze (14) and quarantaine (quarantine). This has more recently been replaced by septaine – a 7-day quarantine.

5. Distanciel – University lectures, team meetings and family reunions were held en distenciel (remotely) throughout the year as people refrained from coming together.

6. Coronapistes – A wave of new cycle lanes emerged after the first lockdown in June to encourage city-dwellers to get on their bikes and avoid overcrowding public transport. Some streets in Paris suddenly resembled those in Amsterdam or Copenhagen. The word is a blend of piste cyclabe – cycle lanes – and coronavirus.

7. Couvre-feu – The word curfew comes from the French couvre-feu (literally ‘cover the fire’, after a tradition in the Middle Ages to prevent villages burning down from unattended fireplaces). The measure, which bans anyone in a given area from exiting their homes between certain times, hadn’t been used as a national measure in France since the Nazi occupation during World War II.

8. Jeudredi – this light-hearted new coinage refers to the common lockdown problem of not being able to remember what day it is. The mixup of jeudi (Thursday) and vendredi (Friday) described the confusion when days blend into one another. Also sometimes heard is samedimanche (Saturday and Sunday).

9. La Covid-19 – although coronavirus and Covid were international words, we should not forget one of the biggest language takeways of the year – coronavirus is masculine but  Covid-19 is feminine.

But there have been other things apart from Covid-19 happening in France, some of which have also seen previously obscure words go mainstream.

10. Séparatisme – Emmanuel Macron used this word in a major speech of October 2019, and has been widely  used this year by the government to denounce threats to the “values of the Republic”, particularly when talking about Islamic extremism. A controversial new law against séparatisme made Macron the target of sharp criticism from several Muslim-majority countries.

11. Glottophobie – Discrimination based on a person’s accent. In November the French lower house of parliament approved a law banning glottophobie, calling it “a form of racism”. The previous month Jean-Luc Mélenchon, leader of the far-left France Insoumise (France Unbowed) movement, was caught being rude to a journalist with a southern accent. The prime minister, Jean Castex, who has a south west accent, has been the target of patronising comments in the French media.

12. Passer à tabac – this colloquial phrase meaning to beat someone up or give them a kicking went mainstream thanks to one of the biggest controversies of the year in France, which was around police violence. As the Black Lives Matter movement took off around the world, France too saw protests over long-standing issues of violence and racism by some French police officers. In November a shocking video surfaced, showing officers in Paris subjecting a black music producer to a violent and lengthy beating. Four officers have now been charged over the attack.