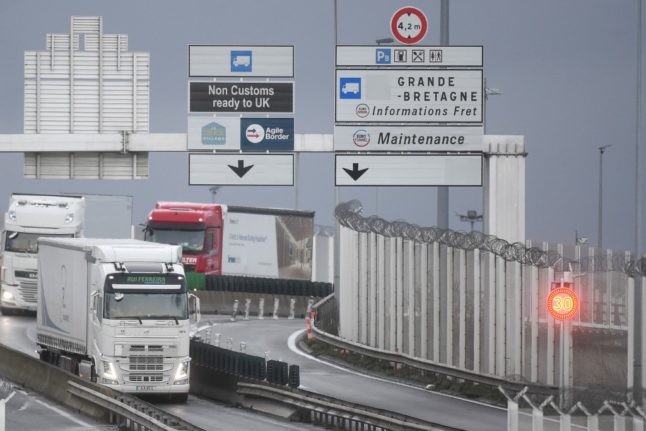 Despite London and Brussels reaching a trade deal to limit the fallout of Brexit the flow of people and goods across the Channel will change significantly on January 1st, when Britain's departure from the EU becomes complete.

Britain leaves the EU single market and customs union at 11 pm UK time on December 31st, which is midnight in Brussels (and France).

As the free movement of goods and people across Britain's borders with its neighbours comes to an end, AFP looks at how travel and trade with France will be affected.

Around 60,000 passengers and 12,000 trucks cross the Channel between Britain and France each day.

From January 1st, British citizens arriving in France via the Channel Tunnel or ferry will have to produce a passport, which will be stamped. They can stay in the EU for 90 days in a 180-day period, after which they will need a visa.

People travelling from the UK in the near future also need to bear in mind strict Covid-19 rules on travel and testing for all arrivals from the UK.

The potential for travel chaos in the event of delays at the border was brought home to travellers on either side in the run-up to Christmas, when thousands of trucks remained blocked on roads leading to Dover after France temporarily closed the border over coronavirus fears.

From around 20 seconds per person currently in the British port of Dover – the main staging post for crossings to the Continent – travellers could be delayed for up to a minute on average after January 1st, officials estimate.

Britons could also be subjected to immigration checks on arrival in France but French officials say they consider Britain a safe third-party country and will aim to keep traffic flowing as smoothly as possible.

French ports are also anxious to keep things moving, mindful that British travellers and hauliers could shift their custom to Belgium or the Netherlands if they face long delays in France Passports will be stamped on entry to France after January 1st. Photo: AFP

With Britain also leaving the EU customs union, exporters and importers on either side of the border will need to declare their goods to French customs online, before their shipments leave the factory.

Lorries departing Britain must present customs officials with customs documents containing a barcode, which the agents will scan and forward, along with the truck's registration number, to officials on the other side of the Channel.

The barcode will allow French authorities to identify the truck's contents and quickly determine, before the driver arrives in France, whether or not the vehicle needs to be inspected upon arrival.

Those transporting animal products or plants that require EU health checks will be directed on arrival to veterinary services.

The rest will be waved through, provided the forms filled out by the exporter online are in order.

Some 230 veterinary staff will vet animal products, animal feedstuffs and plants in the ports of Calais, Dunkirk and Boulogne-sur-Mer.

Besides checking the haulier's documents against the cargo, the inspectors may also carry out health checks on a sample of the merchandise.

French authorities estimate that 10-12 percent of trucks arriving in northern French ports will be subject to checks to prevent the spread of plant diseases.

Trucks carrying animal products such as lamb from EU member Ireland over the so-called UK land bridge will be exempted from the inspections.

France has spent some €40 million and hired 700 extra customs, immigration and veterinary staff to prepare for the return of a border with Britain. These systems have been tested several times over the course of the past year.

Truck drivers whose shipments have incomplete paperwork or are subject to lengthier inspections will be ordered to park in one of the 6,000 new spots built to avoid logjams in and around France's Channel ports.

On the British side the government has pledged £200 million (€222 million) to help ports develop post-Brexit infrastructure.

It is also building huge lorry parks in southeast England. But it refused to fork out the £33 million sought by the port of Dover to double the number of French passport inspection booths.

Dover port director Doug Bannister has warned of “friction and delays” at the port.

Trucks loaded in the country of departure before 22.59pm UK time on December 31st will not be subject to the new controls, even if they cross the border after midnight.

Many British importers stocked up in December to avoid their consignments getting held up at the border in January.

As a result, French authorities are expecting January to be relatively calm.