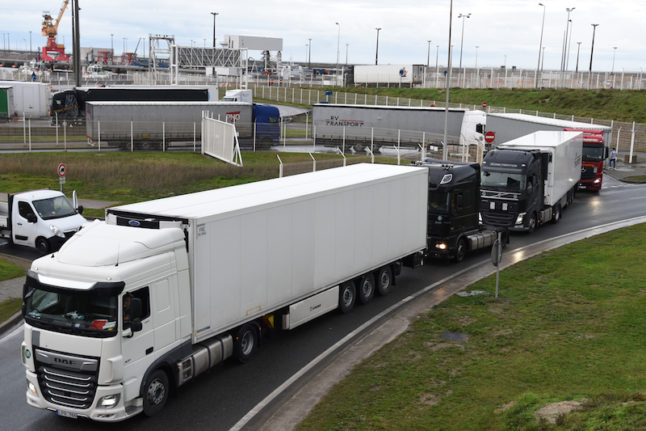 Thousands of European truckers on Wednesday spent a fourth night sleeping in the cabs of their vehicles, which are stuck close to the major cross-Channel port of Dover while the drivers wait to pass a Covid test, as required by France for travel.

Around 6,000 trucks were waiting early Wednesday evening to cross the border according to Britain's Department of Transport, including 3,750 vehicles parked at the old Manston airport, which is also a Covid testing site.

The others are stuck on the nearby roads in the southeastern county of Kent. “As testing in Kent continues… I've spoken to my French counterpart (Jean-Baptiste Djebbari) and we've agreed the UK/French border at Eurotunnel, Dover & Calais WILL remain open throughout Xmas in order to help hauliers & citizens return home as soon as possible,” UK transport minister Grant Shapps
wrote on Twitter.

Ferry services do not usually run between Dover and France on Christmas Day. The massive testing operation, which is being bolstered by the military, began late Wednesday under an agreement between London and Paris to resume the flow of cross-Channel traffic.

France suspended the routes after a potentially more contagious variant of the virus was identified in Britain.

A team of 26 French firefighters arrived early Thursday in Dover with10,000 tests to help the British and “accelerate” the return of European citizens, according to France's ambassador to Britain Catherine Colonna.

Shapps said 2,367 tests had been carried out by 1200 GMT Thursday, and only three truckers had tested positive.

“As the EU Transport Commissioner (Adina Valean) has tweeted, testing hauliers is not recommended. Spending days in a lorry on your own puts you in an extremely low risk category!” he added.

Britain's supply chain is highly dependent on trucks shuttling to and from mainland Europe and the closure has stoked fears shortages could arise, just days before the country leaves the EU single market and customs union.

Commissioner Valean estimated that a total of 10,000 European truckers were having difficulties returning from the UK. She blasted France for imposing the snap freight restrictions, criticisms rejected by Paris.

British MP Natalie Elphicke, the representative for Dover, backed the commissioner, tweeting that there was “no excuse for France's irresponsible behaviour in closing the Border.

“The EU Commissioner for Transport is right in her condemnation of France's decision and actions.”French truckers' union FNTR said the situation on the ground was still “chaotic”.

“Drivers I've spoken to, especially those at Manston airfield where thousands are parked, have been there four days without a shower, and hardly have a thing to eat or drink,” a spokeswoman said.

“They're in a dangerous place health-wise and socially. We're really starting to worry,” she added, warning of trouble ahead if they did not move start moving soon.

Volunteers from the Guru Nanak Darbar Gurdwara in Gravesend were preparing thousands of hot meals and snacks for the drivers, part of a wider effort by Sikh humanitarian groups.

More than 50 countries have imposed travel restrictions on the UK after it was announced that a variant of Covid-19 believed by British scientists to spread faster had appeared in the country.