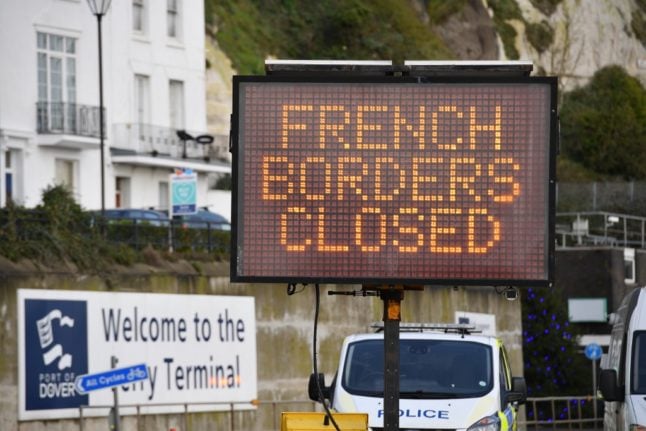 France has banned all travel coming in from the UK for 48 hours. Photo: AFP

The Commission's recommendation is that people heading to their country of residence should be allowed to travel, along with EU citizens heading home and essential freight traffic.

Entry for individual travellers is likely to be dependent on testing.

European Commissioner for Justice, Didier Reynders, said: “Given the current uncertainties and in light of the precautionary principle, Member States should take coordinated action to discourage non-essential travel between the UK and the EU.

“At the same time, blanket travel bans should not prevent thousands of EU and UK citizens from returning to their homes.

“While precautions are needed to contain the spread of the new coronavirus variant, with today's Recommendation, we therefore ensure that the restrictions are coordinated and provide for the necessary exemptions for citizens and residents returning home and other essential travellers.”

The recommendations will be put to EU ambassadors later on Tuesday.

The Commission can only make recommendations and each EU country keeps control of decisions regarding its borders, but France has been keen for an integrated European solution so it likely to go along with the recommendations.

If adopted it would mean the following people could travel to France;

Entry will also be dependant on a negative Covid test, although the type of testing for hauliers – thousands of whom are waiting in England – is still under discussion.

The French government had already advised its citizens in the UK to get a test in advance of the border reopening.

Only a PCR (nasal swab) test will be accepted, not the quick-result antigen test or the finger-prick antibody test, but many French nationals in the UK have reported great difficulty in sourcing a test.

France announced on Sunday night that it would be closing its borders completely for 48 hours in response to an announcement by the UK government that a highly infectious new strain of Covid-19 had been discovered.

It was one of about 40 countries around the world to announce a ban on entry from the UK, but the closure of the French border caused chaos in southern England with hundreds of lorries unable to access ports and the Channel Tunnel were stuck in long tailbacks.

Travel from France to the UK is not covered by the ban, but many operators have cancelled services.

Other countries such as Germany and Italy have already announced a travel ban running until January 6th, but France's ban was only in place until 11.59pm on Tuesday.

The French Defence Council met on Monday night and said they had suggested solutions, but wanted to work in partnership with the European Commission for a harmonised approach.