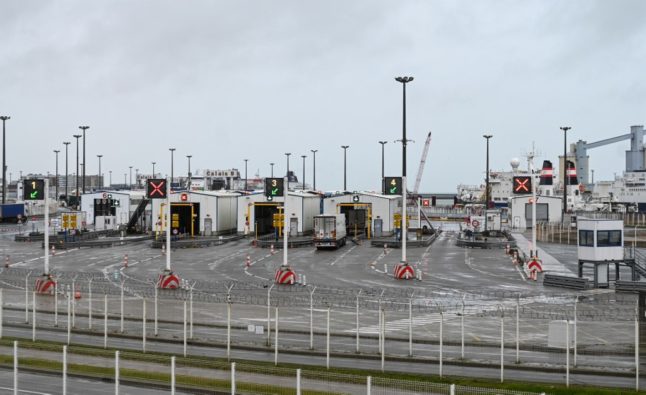 Hardly any cars were in the vast parking lot, and just one person stood at the currency exchange desk – a local woman changing money for her employer.

Eduard, a Romanian who lives in Birmingham, was among the few buying tickets for ferries to the UK after France warned that nobody would be allowed to enter from Britain for 48 hours.

“I left my family in England so I could visit my father, who is ill, and now I'm going back,” he told AFP.

Others were less lucky, unable or unwilling to make the trip without any certainty they could return as planned.

Despite heated complaints to an agent, Robert, who lives in Paris, was refused boarding although he had a ticket for a Christmas visit to his son in London.

“I travelled 300 kilometres to get here and the only thing to do is go back – my son lives in a red zone and isn't allowed to have any guests,” he said. Motorway signs warn of the 'strict closure' of the England/France border. Photo: AFP

Marisa Fernandes was returning to Peterborough, an English town a two-hour drive from London, to celebrate Christmas with family, but her relative who lives in Luxembourg was wary of finding himself stuck in Britain.

Agents at the terminal fielded a flood of calls from people asking if ferries were running. The answer is yes, but don't plan on getting back while the ban is in place.

That prompted David Sagnard, owner of a trucking company, to cancel trips on Monday.

“Twelve vehicles were to leave today, half from the port, the others taking the Channel Tunnel,” said Sagnard, who is also the regional president for the French truckers' federation FNTR.

Sagnard said his decision would cost around €10,000.

“We're thinking about finding a solution for transporting without drivers, by using containers, but in Dover the traffic jams are so bad that vehicles trying to pick up a trailer would never reach the port,” Sagnard said.

Jean-Marc Puissesseau, president of the Port of Calais, confirmed that Dover was overwhelmed. “We're going to try to ask them to create more access lanes for the non-accompanied transport zone,” he said.

Hardly any other trucks were rolling under grey overcast skies outside the terminal, and the only activity at the Channel Tunnel access points came from French police patrolling against migrant bids to sneak through.

Nearby highways also saw just a fraction of normal traffic, as signs warned of the French border's “strict closure” to travellers from Britain.

Just days earlier the Tunnel was recorded one of its busiest ever periods as British retailers rushed to stock up ahead of Brexit on January 1st.