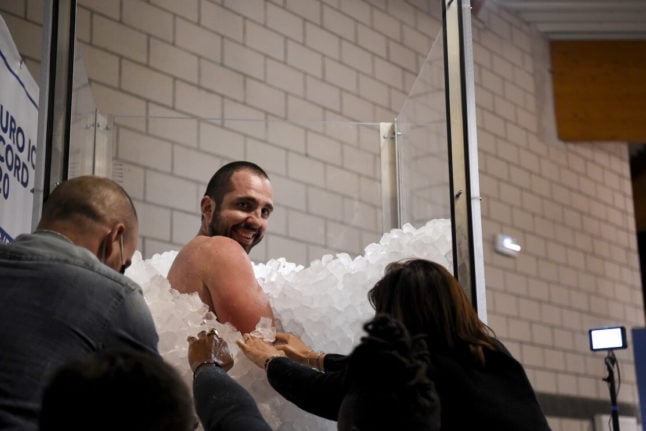 The 34-year-old health worker remained buried up to his neck in ice in a plexiglass cabin for two hours, 35 minutes and 43 seconds, breaking the previous record by 40 minutes in the northern French town of Wattrelos.

He said he trained to “overcome human limits” by neuro-cognitive techniques based on “imagination and concentration” to put himself in “a state of daydreaming.”

The feat was performed before some 50 people and Vandendorpe's mantra for success was simple.

“If we train, if we give our all, we can advance (and) obtain results that can improve things.”

His training techniques including sitting in an ice-cold jacuzzi, training in a 500-litre freezer and then remaining buried in snow in the French ski resort of Chamonix.

He aims to donate the money raised through his feat to the Wonder Augustine association founded in Wattrelos following the death of a four-year-old girl called Augustine two years ago from brian cancer.

“Everyone can donate one euro for every minute Romain remained immersed in ice,” said Steve de Matos, the head of the association.

Vandendorpe had met Augustine a few days before her passing.

His message to children battling cancer was simple: “Always be hopeful.”