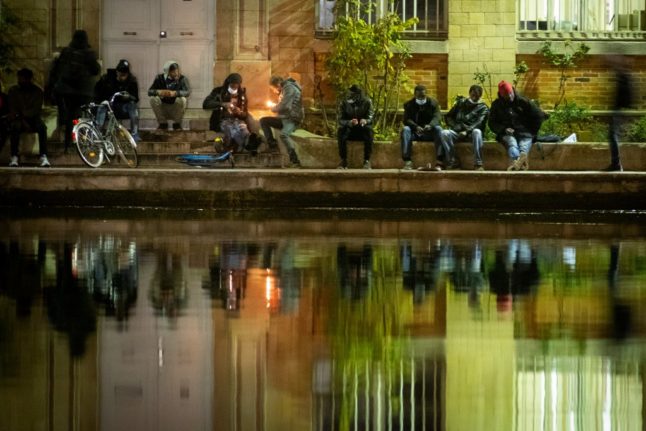 As Ousmane heats the small square of whitish powder, the “rock” crackles. One draw on his homemade pipe, and he is away with the spirals of smoke.

Despite officials' best efforts to drive it out of Paris, crack is still wreaking havoc among users in France's capital.

“Crack, it's the pleasure of having a Ferrari, of being with a sex bomb, of cooking great food…,” says Ousmane, a former teacher, now in his 40s, as he sits next to the canal near Place Stalingrad.

For 30 years, crack has been the bane of this part of the capital, in the less glamorous northeast of the city.

Since last year, city officials have stepped up efforts to curb the use of the drug: more police patrols, arresting dealers and providing housing for addicts.

So far, however, it has all been in vain.

Crack is created by cutting cocaine with another agent, such as baking soda, for an intense and highly addictive high. Ousmane has been hooked for 20 years now. He has lost count of the thousands of euros that have gone up in smoke through his pipe, each hit paid for with a handful of coins or notes.

Prison has not broken his habit, nor have spells of “cold turkey” and therapeutic treatments.

A family man with children, Ousmane lives within commuting distance of the capital. And when he travels in from his home in the northern suburbs to feed his habit, he stays “three, four, five days”.

Once he starts, he doesn't sleep or eat, only stopping when his body – or his supply of the drug – gives out.

He is far from the only user to make the journey to Paris. Some people travel from as far as the eastern city of Strasbourg.

For Paris is the capital of crack, he says: the only place in France where you can find it on sale, ready-made.

Anywhere else, and you would have to “cook” it yourself, buying the cocaine then cutting it with sodium bicarbonate (baking soda), or ammonia. Crack smokers stand behind grids installed to prevent them from entering on the docks in Stalingrad on December 2nd. Photo: AFP

Stalingrad is a bustling multicultural district with plenty of shops and cheap restaurants. And it has long been the heart of the city's crack community.

Local residents have taken to calling it “Stalincrack” given the ever-rising numbers of users scattered across the square and the neighbouring streets.

After police raids cleared several camps of addicts dotted around the city, including the notorious “Crack Hill” near the Paris ring road, the users simply relocated.

So now, every night, dozens of addicts gather along the banks of the Canal Saint-Martin leading off from the square, to smoke crack.

During the first Paris coronavirus lockdown in spring, there were sometimes more than 400 of them there, says Carole, a local who did not want her full name used.

From where she lives, she can look down from her window at the open-air drugs den, with the shouting, brawls and thefts at the foot of her building.

Some of her neighbours have taken to firing paintballs at the users below, but she has resigned herself to the growing insecurity.

She can't help feeling sorry for the users, though, she says – for their sickness. A police officer walks out a tunnel used by crack addicts during an evacuation in the 19th arrondissement of Paris on September 3rd, 2020. Photo: AFP

The police turn up fairly regularly, moving the users on 500 metres, and she's grateful for the respite, she says.

As soon as they are gone however, the users and dealers drift back.

She knows about the anti-crack drive launched last year — a joint effort by police, prosecutors, the health authority as well as city and regional officials.

But she doesn't see the results on the ground. To try to break up the users' community, the police have stepped up arrests of the dealers, many of them originally from West Africa, known as the “modous”.

They hope that way they will break up the micro-networks of people cooking the crack on a simple stove, often in slums on the edge of the capital.

“There is sometimes a kind of structure, with a manager who runs four or five dealers and a cook,” says deputy prosecutor Julie Colin, who runs the organised crime section of the Paris prosecutor's office.

Since the beginning of the year, they have launched 610 crack-related prosecutions, seizing 1.6 kilos – 8,000 doses – of the drug.

At the same time they have sought to ban any users from northeast Paris and impose compulsory treatment on them for their addiction.

But they have their work cut out for them: the city puts the number of crack users in Paris at 1,500.

And the drug is so addictive, with no obvious substitute to help wean addicts off their habit, neither the police nor the prosecutors have any illusions about the scale of the task.

“We're not claiming to be able to solve this phenomenon, which goes way beyond police action,” says Valerie Martineau, head of DSPAP, the police unit trying to tackle the problem across the Paris region.

For her, the solution lies in organising better treatment options. It is a collaboration between the city and regional councils, the local health authority and MILDECA, the interministerial body tackling drugs and drug addiction.

Originally budgeted at nine million euros, it has already burned through €10 million at the half-way stage, according to official figures.

The money has mainly been spent on increased work by organisations trying to get drug users into shelters such as hotels, where they can get support from medical professionals and social workers.

They have managed to get more than 420 people into such lodgings, up from the 60 before the programme started.

“There are still a lot of users in the street and a lot of public order issues,” says Luc Ginot, public health chief at the Regional Health Agency.

“But it's a very positive record given the scale of the problem.”

There is no consensus on how to tackle the drugs problem however.

On the other, police and prosecutors have resisted plans to set aside spaces for addicts where they can take their drugs away from public areas.

Since being re-elected as Paris mayor earlier this year, Hidalgo has had little to say on this sensitive issue.

Paris already has one such safe space, a shooting gallery mainly used by heroin addicts next to the Lariboisiere hospital, 10 minutes' walk from Place Stalingrad.

But Gaia, the association running the space, says it is full.

Before the coronavirus pandemic, they received 600 people a month, with 400 users on any given day, says its director, Elisabeth Avril.

The Swiss city of Zurich has 400,000 inhabitants and four such spaces, she says: in contrast, there are more than 10 million living in Paris and the surrounding region. “But no one wants to open another space.”

Avril, a doctor who has spent 25 years working with addicts, is exasperated by the arguments against such spaces. “To say that a users' hall is going to keep users in the neighbourhood, doesn't make sense.

“These people have been hanging out in the same places since the 1990s,” she argues.

“Crack at Stalingrad, that's always been there,” says the veteran user Ousmane. He would be happy to have somewhere other than the street to feed his habit.

“For me, stick me in a cage with crack and I'm happy.”