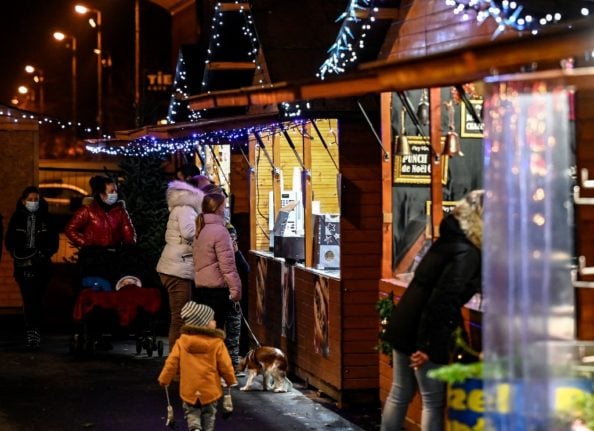 On December 15th France lifted its six-week lockdown, which means that travel for any reason and socialising are again possible.

This means that people can go and visit their families over the holiday – but plenty of restrictions remain, including an 8pm curfew, while bars, restaurants, theatres and cinemas have to keep shut.

READ ALSO What changes in France as lockdown lifts?

On top of this, the French Prime Minister has advised anyone planning to travel and visit family and friends that they should self-isolate for eight days beforehand. Children have been given a special dispensation to miss the last two days of school for this purpose.

So given all the restrictions, are French people planning a normal Christmas this year?

“I fear that we could pay the price of the easing of restrictions”, said Pauline, 70.

“I wouldn’t be surprised if there’s another lockdown in January or February.”

Most people we spoke to said their life won’t change much as lockdown lifts because restaurants, theatres etc are staying closed and going out in the evening is not possible because of the curfew.

“Déconfinement (lifting lockdown) doesn’t change much for me because I still can’t go to restaurants with my friends or go to the theatre,' said Jacques, 32.

“The only thing that will change is that I can see my parents again.”

But he added that he agreed with the curfew, saying; “at least my neighbours won’t be having parties soon”.

But although seeing family is again possible, the government has urged caution, particularly for people whose relatives are in high-risk groups such as the elderly.

Marc, a 55-year-old from Paris told The Local: “I’m worried about travelling to see my parents this Christmas.

“I’m still planning to see them, but I’ll be wearing a mask and staying 1.5 metres away at all times, as will my kids”.

The eight-day self-isolation period before travel is a recommendation, not a rule, but the government's Scientific Council hopes this could flatten a post-Christmas spike in cases.

But Marie, 48, said: “It simply isn’t possible for me to quarantine for eight days.

“I am a nurse and I only just managed to get enough days off work to visit my parents, but I’ll be taking all the necessary precautions to keep my family safe and I get tested in my job every week.”

Even the students, sometimes scapegoated as being the 'superspreaders' of Covid-19 through unauthorised partying, have scaled down their plans.

French and international students living in Paris all said they expected the Christmas holidays to be a far cry from their usual celebrations.

Rachel, a 21-year-old British student studying in Paris said: “I won’t be doing the usual things I do with my friends at Christmas.

“I can travel to go home but we can’t have a party, go out to a restaurant and definitely not a bar. My Christmas will be very much spent at home with my close family members.”

The French government decided to keep the curfew in place for every day over the festivities (except for December 24th) to prevent people from throwing late-night parties to ring in the New Year.