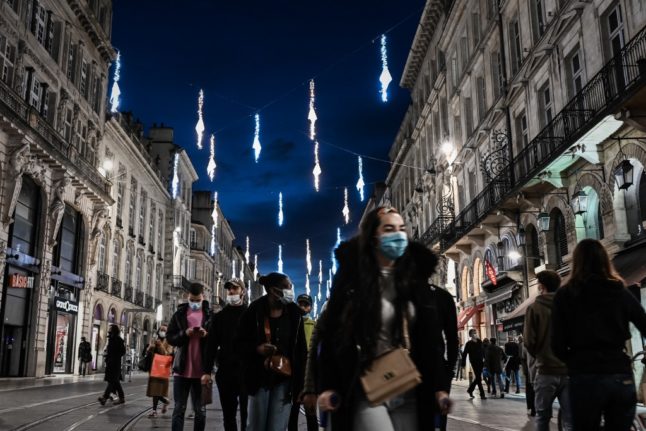 “If you can. . . (you should) self-isolate for eight days before Christmas,” French Prime Minister Jean Castex said on Tuesday, referring to new advice from the country’s Scientific Council, which was set up in spring to advise the government on its Covid-19 measures.

“Especially if you are going to being seeing vulnerable people over Christmas,” Castex told Europe 1 on Tuesday morning, adding: “If you can not send your children to school on Thursday and Friday, you do it.”

On the morning of December 15th – the day France eased its lockdown and replaced it with a nationwide nighttime curfew – the Scientific Council published a note where they asked those planning to travel over Christmas to self-isolate for a week beforehand.

Here's what is suggested

READ ALSO: Lockdown lifting: What kind of Christmas can we expect in France this year? Schools in France break up for the holidays on Saturday, December 19th, but the Scientific Council asked anyone who could to keep their children at home the two preceding days in order to leave a period of eight days from then until Christmas.

Absences these two days will be “tolerated”, the education ministry told AFP. Parents must however warn the school if they intend to keep their children at home.

“It’s not an obligation.. . It’s a recommendation,” Castex said, responding to the Europe 1 journalist's question of why authorities had not published this advice sooner, potentially making it hard for parents to organise themselves in order to keep their children and themselves at home.

Some people are planning to get tested before travel, but the Scientific Council warned against a “false security” regarding the Covid-19 test and asked those without any symptoms to not get tested unless they were identified as a contact case.

Health Minister Olivier Véran said the same during last week's press conference, when the government laid out the road ahead for the holiday period.

“Please don't use the test as a kind of totem of immunity, it's risky for you and for your loved ones,” Véran said then.

READ ALSO: Should you get a Covid-19 test in France before travelling over Christmas?

Symptomless people who were not identified as a contact case should rather reinforce health measures and reduce social contacts outside the holiday celebrations, the Council noted.

An increasing number of pharmacies are now offering the fast-result antigen test on a walk-in basis.

The Council said that while this could be useful for people who had been exposed to risk in the preceding eight days – such as working in an office or travelling on public transport – it should not replace health measures and mask-wearing.

'Extreme caution' to prevent a resurgence

France has seen Covid-19 rates stagnate following weeks of dropping daily case numbers, and authorities have expressed worry that the virus could spiral out of control again over the holidays.

The government decided to lift lockdown despite not having reached the initially set threshold of less than 5,000 new cases per day. The past week, national health authorities have reported some 13,000 new cases per day (13,662 on average in the three days preceding Monday) – nearly three times the set goal.

“The balance is fragile,” the Scientific Council noted, adding that it “urges us to be extremely cautious” as people prepare for Christmas celebrations, with some travelling to visit family in different regions, elevating the risk of spreading the virus.

The Council also reminded people to respect the “rule of six” adults around the dinner table, which is the official recommended limit (although not a legally binding rule).
Vocab

Se faire tester – to get tested