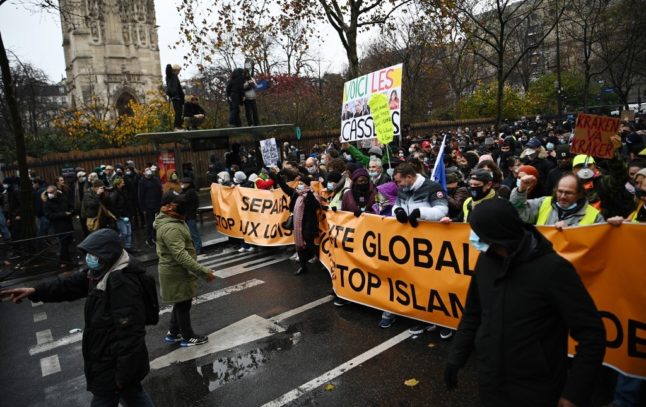 Demonstrators marching in Paris on Saturday. Photo: Christophe Archambault/AFP
Thousands of protesters took to the streets in France on Saturday for a third consecutive weekend of demonstrations over a controversial security bill that would limit filming of the police.
The authorities had been bracing for further possible violence after the last two such protests in Paris ended in rioting.
READ MORE:
Violence erupts in new Paris protest against security law
Protests in France: Interior minister condemns violence after 62 police officers injured
But there were no major flare-ups as several thousand protesters — the organisers claimed a turnout of 10,000 — flanked on all sides by riot police, marched through the city.
“Global repression, total regression,” read a placard held aloft by one demonstrator, a reference to the new “global security” bill which bans the “malevolent” publication of images showing the faces of police officers in action.
Interior Minister Gerald Darmanin tweeted that 142 people were arrested in Paris. Demonstrations were also held in Montpellier, Strasbourg, Lille, Toulouse and Marseille.

Lucas Burel, a journalist from the L'Obs news magazine, posted video footage of protestors clashing with riot police on the Boulevard de Sébastopol.

The third consecutive weekend of protests against France's new security law began at La Place du Châtelet by the river Seine at 2.30pm. Marchers then made their way slowly towards La Place de la République.
The global security bill has generated huge opposition, primarily due to clauses which would restrict the publication of pictures of the faces of police officers. Critics argue it will  make it harder for journalists and citizens to document cases of police brutality.
Footage of white police beating up an unarmed black music producer in his Paris studio on November 21 amplified anger over the legislation, widely seen as signalling a rightward lurch by President Emmanuel Macron.
Article 24, the most (but not the only) controversial clause is currently being rewritten, although it had already passed through the National Assembly.
Protesters are also decrying police violence and the “law to strengthen republican values”, previously known as “the law against separatism”.
EXPLAINED: The new French law that restricts photos and videos of police officers
The Local's reporter Ingri Bergo photographed a police water canon slowly moving towards Place de la République, in a warning of what might happen when the protestors reach their destination.

Water cannon at the end of the protest, which is moving slowly towards Place de la République in Paris. pic.twitter.com/wamaJENqip Photo: Christophe Archambault/AFP
According to the Le Parisien newspaper, there were 35 squads of “forces mobiles” riot officers, and 200 specialist BRAV riot police, on hand to supervise the Paris protest, as well as two drones.
The Local reporter Ingri Bergo photographed the riot officers gathered at the start of the protest.

Point of no entry – Heavy ?‍♂️ presence around Place du Châtelet, where the protest in Paris was set to depart from at 2.30pm. pic.twitter.com/PO5F0oIgRL

She also interviewed several of the demonstrators about what had brought them out.

Djami, a long time yellow vest, and her friend Fifi had a long list of reasons. Djami said she thinks the bill on republican values will discriminate against Muslims. They also decried what they called a “health dictatorship”. Djami was not wearing a face mask when we spoke. pic.twitter.com/yts3mOizoy

Mathilde, 30, said: “I think it’s become more difficult to protest the past few years because the confrontation with the police is perpetual. There’s not many children present anymore (..) or elderly, because it’s becoming too dangerous.” pic.twitter.com/wqUKroVKue Photo: Christophe Archambault/AFP
The recurring allegations of racism and brutality against the police have become a major headache for President Emmanuel Macron.
In a letter to a police union leader on Monday, he announced plans for a summit in January on how to improve relations between the police and communities.
“There is urgent need to act,” Macron said in the letter to the Unite-SGP-FO police union, adding that the summit would also address the police's longstanding complaints over working conditions. 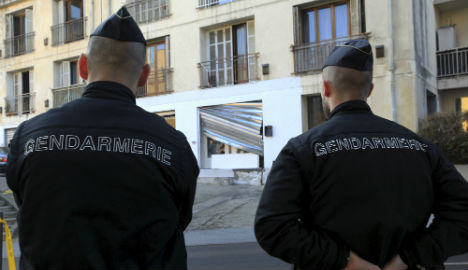 French police guard a Muslim prayer room in Ajaccio, Corsica, on December 26. Photo: AFP
As condemnation poured in from Muslim authorities and French officials over Friday's anti-Arab protests, around 100 demonstrators shouting “We're still here” turned out in the same low-income neighbourhood of the capital Ajaccio where the Christmas day violence took place.
Despite a heavy police presence, one demonstrator managed to smash three glass entrance doors in the Jardins de l'Empereur housing estate perched on an Ajaccio hillside as protesters shouted “This is our home!”.
Like the demonstration that ended in trouble the previous day, the protest aimed to denounce violence against police and firefighters on the estate.
Two firefighters and a police officer were wounded in the neighbourhood overnight on Christmas Eve after a fire was “deliberately lit … to ambush police and firefighters”, said regional official Francois Lalanne.
A firefighter at the scene said hooded youths who attacked the officers shouted at them: “Scram, Corsicans, you're not at home here!”
On Friday afternoon, 600 people had gathered in front of police headquarters in Ajaccio in a show of support for the police and firefighters. But some 300 broke away to head for the housing estate.
Shouting “Arabs get out!” or “This is our home!”, the group smashed a Muslim prayer room, partially burning books including copies of the Koran, said Lalanne.
French Prime Minister Manuel Valls wrote on Twitter that the break-in was “an unacceptable desecration”, while also condemning the “intolerable attack” on the wounded firefighters.
Anouar Kbibech, president of the French Council of the Muslim Faith (CFCM), said he had learnt of the mosque attack and the burning of “several copies of the Koran” with “distress”.
French Interior Minister Bernard Cazeneuve said the attack on the Muslim prayer hall showed signs of “racism and xenophobia”.
He also condemned the assault on law enforcement and safety officers in Corsica, saying he hoped “the authors of the violence would be identified and arrested as soon as possible.”
Url copied to clipboard!