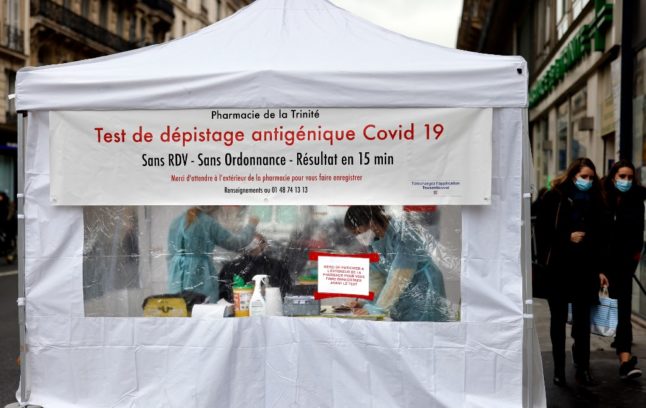 Rapid-result Covid tests are now available in many areas on a walk-in basis. Photo: AFP

Despite the health data being less good that hoped, France will still lift its lockdown on December 15th, meaning that travel to see friends and relatives over the Christmas period will be possible.

But is it a good idea to get tested before you go?

After major problems in the spring with shortages, France has considerably ramped up its testing capacity and is now testing more than 1 million people a week.

There are several different routes to testing and now two different types of test available.

If you have symptoms or are alerted as a contact case of someone who has tested positive for the virus, you can book an appointment for a test at the laboratoires. These are appointment-only and offer the PCR nasal swab tests.

There are also walk-in centres for testing which do not require appointments, but some of these prioritise health workers or people with symptoms or have had contact with a possible case, so check before you go. These also offer PCR tests. And the more recent development is widespread antigen testing. This is a nasal swab test, but instead of being sent to a lab to be processed, they produce results within 15 minutes. These type of tests are less accurate than PCR tests, but are useful for situations where widespread testing with quick results is needed – such as at airports. The tests are now being used at almost all of France's airports for new arrivals, but are also increasingly available at pharmacies on a walk-in basis.

So is it worth getting a test if you are intending to travel and see family over the holidays?

Some experts say that their lower reliability levels, particularly for people who don't have symptoms, make them worthless, while others worry that having a negative test result will make people complacent and more likely to neglect basic hygiene precautions.

This question was addressed by Health Minister Olivier Véran during a press conference and this is what he said:

“On paper it is a good idea, but there are risks that come with getting the test.

“There is a risk that the test will be negative even if you carry the virus.

“There is also the risk that a person gets tested and then neglects the hygiene gestures or becomes complacent about wearing a mask.

“Please don’t use the test as a kind of totem of immunity, it’s risky for you and for your loved ones.”

He stressed that the best protection remains limiting social interactions as far as possible, keeping numbers low at gatherings and ensuring good hygiene.

People who get PCR tests also risk overloading laboratory systems that are needed for patients with symptoms or contact cases, although this is less of a problem with the antigen tests which can be done by pharmacies.

If people do decide to get tested before travel, experts advise that the test should be done five days in advance, followed by a period of self-isolation before the travel date.