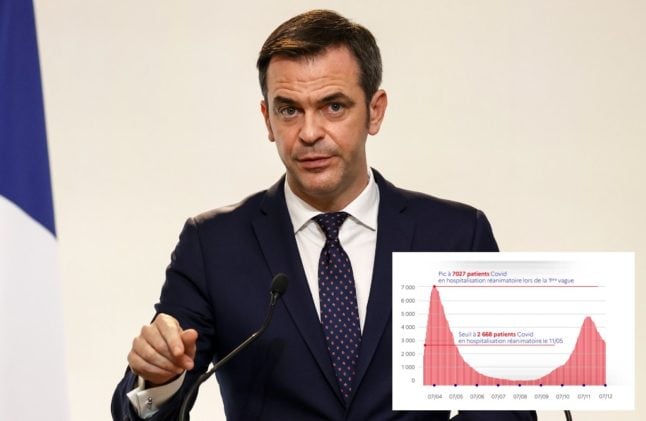 In his Thursday night briefing, French Prime Minister Jean Castex laid out the plan for lockdown rules and nighttime curfews over the next six weeks.

The plan had been altered from the three-step progress initially envisaged because the government's self-imposed target of 5,000 Covid cases per day has not been met.

This is the latest on the health situation as presented by Health Minister Olivier Véran in the briefing.

This was the key target which was missed – when presenting the three-stage process for lifting lockdown that was unveiled at the end of November, the target was set for case numbers to be below 5,000 a day by December 15th.

At the time that target seemed achievable as case numbers were falling rapidly from a peak of 50,000 new cases a day when France locked down on October 30th.

However when they got to around 12,000 cases a day, the numbers plateaued and have stayed at roughly that level for the last two weeks – allowing for fluctuations in case reporting over weekends.

This broadly coincided with non-essential shops reopening and religious services starting up again on November 28th, although Véran said that another important factor was the weather.

This was the time when the weather in France turned and became cold and damp, forcing people inside and cutting down the amount of time people spent ventilating rooms with open windows. The above graphic shows case numbers per day peaking at the end of October, falling rapidly after lockdown was introduced and then plateauing from the end of November. The government's targeted fall of being below 5,000 cases is shown in green.

The other key metric that the government set for lifting lockdown was around the situation in the country's hospitals, and here the picture is a little brighter.

The target was to have fewer than 3,000 Covid patients in intensive care units by December 15th and that has now been reached, with 2,959 patients on December 11th.

Importantly, the pressure on intensive care units has also decreased, with 58.3 percent of ICU beds now occupied by Covid patients, compared to near 100-percent occupancy at the start of the second lockdown. In terms of Covid patients being admitted to hospital, the second wave has actually seen higher numbers than the first wave in the spring, as the above graph shows.

On December 10th, Véran said that across France one Covid patient is admitted to hospital every minute, and one patient admitted to intensive care every seven minutes.

What has changed since the spring is the number of hospital patients who end up in intensive care, and this has been put down to improvements in treatment of the illness.

Despite this, of every four Covid patients who are admitted to intensive care, one will not survive.

The below graph shows comparative intensive care occupancy between the first and second wave. The graph below shows the peak and fall of intensive care occupancy over the last three months. COMPARE: Nine charts that show the evolution of Covid-19 second wave around Europe

When flagging up the cold weather as a factor in the plateauing case numbers, Véran pointed out that this of course also affects other countries around Europe.

And this could explain why several of France's neighbours are also struggling to contain the virus, in particular Germany – which was relatively lightly affected in the spring – is now seeing a sharp rise in case numbers and is tightening its own restrictions.

At the end of October, France was seeing some of the highest number of cases per head of the population in the world, significantly worse than Spain, Italy, the USA and Germany. Statistics on case numbers always come with a caveat that it very much depends on the country's testing policy – countries that test widely obviously report more cases, particularly among the roughly half of Covid patients who have either no symptoms or very mild ones.

But the evolution is interesting, as by December 10th, the picture is reversed and France is reporting significantly fewer new cases than the USA, Switzerland, Italy and Germany. And the reason for this seems fairly clear – lockdown.

The measures that France took at the end of October were a lot stricter than many of its neighbours.

As the below chart shows, only France, Belgium, Greece and the Czech Republic opted for confinement national (lockdown) while the rest of Europe brought in a combination of confinement partial (partial or regional lockdowns) couvre-feu (curfew) and closures of schools, bars and restaurants. How the situation has evolved on a local level

The interactive map below shows the infection rate of the virus on a local level. The départements shaded darker blue have a higher infection rate per 100,000 people.

The map shows the west of France, particularly Brittany having much lower infection rates. Some experts have credited this in part to the slightly milder weather on the west coast.

The colder east of the country meanwhile, also borders several countries with high levels of cases such as Belgium and Switzerland.

Paris and Marseille, which were both hotspots in the autumn, have seen their situations improve significantly, possibly thanks to the curfew that was imposed before the whole country was locked down.

In general though, the regional differences are a lot less pronounced than they were in the spring, when some parts of the country were virtually unaffected.

The second map below shows the infection rates per département at the end of October when lockdown was imposed, revealing how the situation has improved in recent weeks.

This was the situation on October 30th.