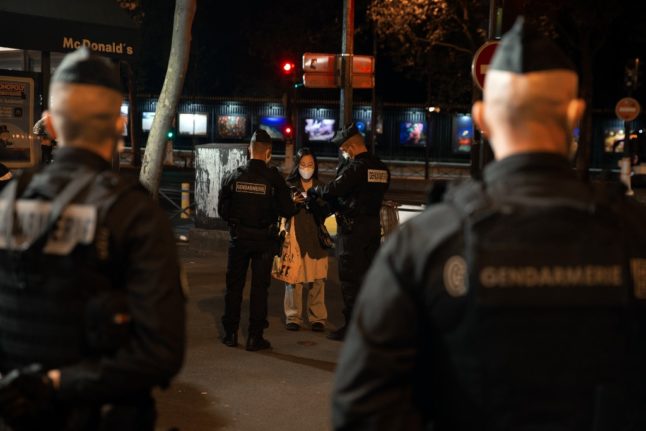 Police will be strict when enforcing the coming night time curfew in France, the government said on Thursday. Photo: AFP

“We will put in place a curfew that will be stricter than planned,” said French Prime Minister Jean Castex.

Flanked by the health and interior ministers, the prime minister declared in a speech on December 10th that the government had decided to lift lockdown on the coming Tuesday, even though the goal of decreasing the number of Covid-19 cases below 5,000 per day “would not be met”.

“This is why we have decided to adapt the easing of lockdown,” Castex said.

Cinemas, theatres and other cultural establishments would have to stay shut for at least another three weeks, and instead of 9pm, the curfew would run from 8pm to 6am.

The curfew would remain in place on December 31st, New Year’s Eve, contrary to what was earlier announced, and would not affect France's overseas territories.

READ ALSO Calendar: The next key dates in France's plan to lift lockdown

December 24th, Christmas Eve, will be a curfew-free night to allow for later celebrations.

Interior Minister Gérald Darmanin said the curfew will be strictly enforced and only the following reasons will be accepted for being out between 8pm and 6am:

An attestation will be needed for all trips out of the home during curfew hours and people found out at night without a form risk a €135 fine – a new version of the permission form will be available soon.

The curfew attestation (permission slip) is available on the government's website – HERE or on the TousAntiCovid app. Can I go to the shop after 8pm?

Those who go to shopping in the evening will not be able to stay until 8pm (except if they literally live in the shop).

“You will have to organise yourself to be home by 8pm,” the interior minister said.

Showing a receipt to the police in the event of a curfew check will not be a valid reason to avoid a fine, Darmanin said.

On the other hand, those who work in a shop or another business that closes at 8pm will be able to return home without risking a fine, as long as they tick the right box on the curfew attestation certificate to be presented to the police.

Can I travel after 8pm?

People arriving in France or travelling between regions whose transport arrives close to or after 8pm are permitted to travel onwards to their final destination.

“From 8pm, [people] must stop travelling with a few exceptions: a train or a plane connection, as was the case during the first lockdown,” Darmanin said, adding that a ticket would serve as travel proof alongside the regular curfew attestation.

Those with a plane, train or ferry to catch outside curfew hours should therefore both fill out a curfew attestation – ticking the déplacements liés à des transits ferroviaires ou aériens pour des déplacements de longues distances (trips linked to long-distance rail or air travel) and keep their ticket ready in the event of a police check.

The plan is to abolish the curfew on January 20th when restaurants, cafés and gyms will reopen – but all this will only happen if Covid-19 cases stay at a low enough level.