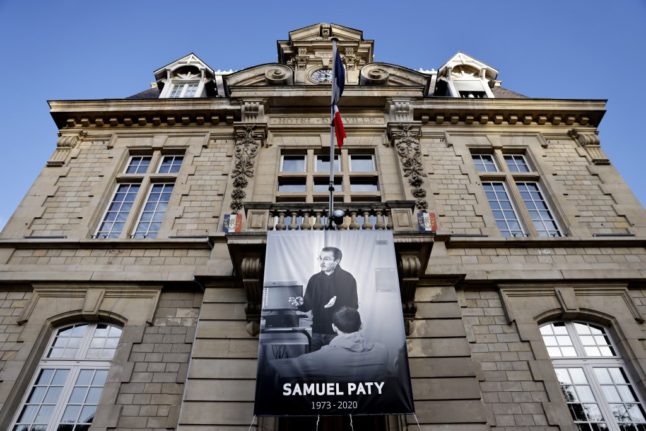 Extra elements around online hate speech were added to the bill after the murder of Samuel Paty. Photo: AFP

The text was originally titled the “anti-separatism” bill, using a term Macron uses to describe ultra-conservative Muslims withdrawing from mainstream society. Following criticism of that term, it is now called a “draft law to strengthen republican values”, mostly secularism and freedom of expression.

The law was in the pipeline before the murder in October of Samuel Paty, a teacher who was attacked in the street and beheaded after showing cartoons of the Prophet Mohamed in a civics class.

But the killing, committed by an 18-year old Chechen after a virulent social media campaign against the teacher, prompted the inclusion in the bill of the specific crimes of online hate speech and divulging personal information on the internet.

Paty's death is one in a string of jihadist-inspired attacks in France which include the 2015 shooting sprees at satirical magazine Charlie Hebdo and the Bataclan concert hall; and the stabbings at a church in the Mediterranean city of Nice the same year. Nice was also the scene of a 2016 attack that killed 86 people when a man rammed a truck into Bastille Day revellers.

Acknowledging that Islamist radicalisation can be homegrown as well as imported, the government is targeting associations and mosques in France that it suspects of spreading jihadist ideology.

The law would make it easier to stop them receiving foreign financing, and would also offer protection to moderate community leaders who are in danger of being toppled by an extremist “putsch”.

The draft law also proposes stricter criteria for authorising home schooling of children over three years old in a bid to prevent parents taking their children out of public schools and enrolling them in underground Islamic structures. An earlier draft that suggested a total ban on home-schooling has, however, been watered down.

Doctors, meanwhile, would be fined or jailed if they performed a virginity test on girls.

Polygamy is already outlawed in France, but the new law would also ban authorities from issuing residency papers to polygamous applicants.

It would also require city hall officials to interview couples separately prior to their wedding to make sure that they were not forced into marriage.

Macron has become a figure of hate in some Muslim countries, with some boycotting French products, after saying that the right to blaspheme would always be guaranteed in France and that Islam was “in crisis”.

Sections of the proposed bill have also been attacked, and sometimes misrepresented, in English-language media in the UK and US.

READ ALSO No, France is not proposing a 'register of Muslim schoolchildren'

Once, as is expected, the cabinet backs the draft law, it heads to parliament at the start of next year for what promises to be a heated debate.