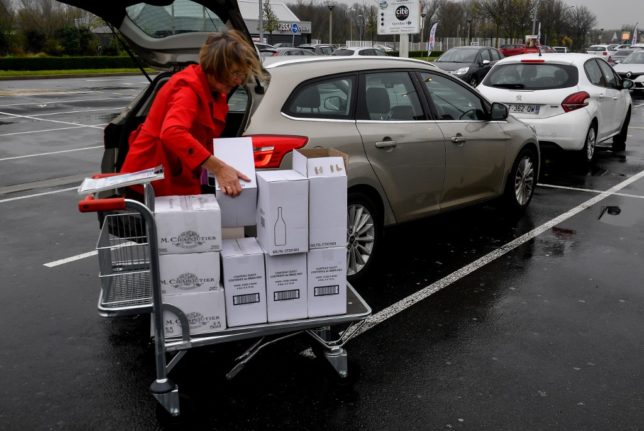 Stocking up on alcohol will be a somewhat different affair post-Brexit.Photo: AFP

Once the Brexit transition period ends on December 31st, there will be much tighter limits on the amount of alcohol and tobacco people can bring into the UK from EU countries.

While bringing back a few bottles as holiday souvenirs will still be allowed, the days of driving to the Calais hypermarché and filling the car with cases of wine and beer will shortly end.

Under the new rules, the following personal allowances have been laid out by the UK government.

As under the old system, these apply only to people bringing in goods for their personal use – anyone who intends to sell on their haul comes under the rule for businesses.

After January 1st 2021 you will be allowed to bring into the UK from the EU;

And it's not just booze and tobacco that will be subject to limits, there will also be a monetary limit on all other goods bought abroad being imported into the UK, so if you intend to hit the designer boutiques of Paris you should limit your purchases.

The value limit is £390 (roughly €430) on goods other than alcohol and tobacco – although it's not totally clear how that will be enforced. Supermarkets in the Calais area have for years done a roaring trade from British visitors. Photo: AFP

Private jets and boats – further bad news for people travelling by private jet or private boat, their limit for the value of goods is lower at £270 (roughly €300).

If you exceed these limits, you will have to pay import duty on your entire haul, not just the difference between the limit and what you have.

People buying alcohol or tobacco in the UK to bring into the EU, will no longer need to pay duty, so good news if you want to import your favourite British beer, West Country cider or Kentish sparkling wine into France (as long as you are not intending to sell it on).

The UK governments says that as a result of these changes, alcohol purchased duty-free on the way to the EU could be up to: