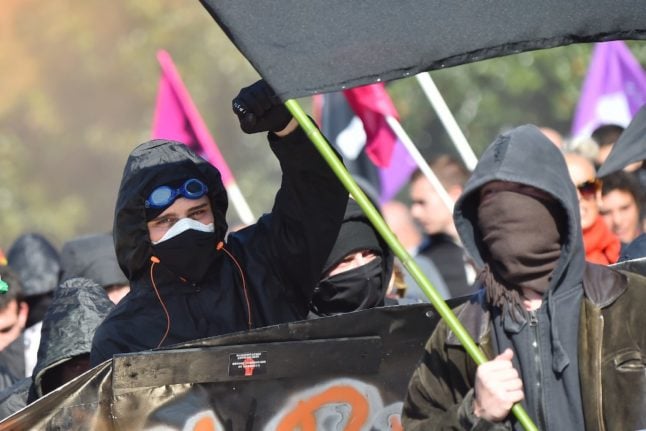 You will have seen them on the news at the end of virtually every French protest, smashing windows and setting fire to cars, but who are the ‘Black Bloc’ rioters and what do they want?

More scenes from Paris today in the Gambetta area. Police come under a hail of missiles thrown by rioters. https://t.co/uL93zzr4tA

Ingri Bergo has conducted this fascinating interview with a French Black Bloc about her life in the violent protest movement and her attitude to protest; “Either we keep all anger and despair inside, get ill and end up on anti-depressants, or we dress up in black and explode on the streets.”

If you love the idea of taking a night train across Europe (post-Covid, obviously) then there’s good news, as France is to be one of the first countries included in a new network of night trains from next year.

In France, President Emmanuel Macron is today presenting his bill to combat Islamic extremism – John Lichfield analyses what is in it and what is missing.

While on the European stage, France’s Europe minister has announced in a magazine interview that he is gay and intends next year to visit one of the so-called ‘LGBT free zones’ in Poland to support the people there.

Modern French diplomacy
To come out, while Europe minister, with a growing public profile in France, and vow to visit “LGBT-free” zone in Poland ⁦@CBeaune⁩
Elegant ⁦ https://t.co/E5rrlY3HQf

If you thought the French sport of pétanque was all about old men sipping pastis as they play, then think again – the sport is making serious efforts to appear more professional and has banned drinking and smoking during competitions and introduced a strict dress code.

Football
For football fans, this is a detailed looked (in French) and what happened during the PSG-Basaksehir match yesterday and why players including Kylian Mbappé decided to walk off the pitch in solidarity after complaints of racist language.
Language
And if you've ever cringed at your French mistakes, don't worry, you could always get a job at Vogue. The US-based magazine has been causing some hilarity with this (now deleted) tweet and its rather uncertain rendering of the French phrase je ne sais quoi.
Vogue Magazine (@voguemagazine) tweeted at 7:18 am on Wed, Dec 09, 2020:
Michelle Pfeiffer has that je nais se quois.  https://t.co/vCpN2AlR4O
(https://twitter.com/voguemagazine/status/1336555764769501184?s=03)