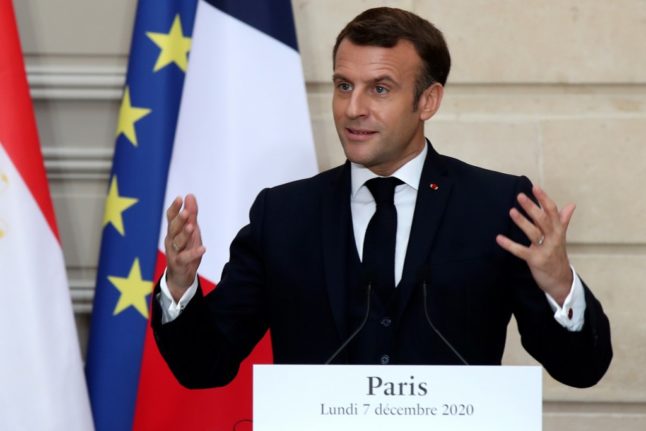 President Emmanuel Macron admitted that France has created its own 'separatism'. Photo: AFP

On Wednesday, the draft law will finally be published and presented to the French government. Its title has changed. Some of its proposals have been modified. There is no specific reference to “Islamism” or Islam or any other religion.

Macron has been accused in recent weeks of lurching to the Right; of attacking Islam itself; of re-inventing French “secularism” until it becomes an attack on personal and religious freedoms, rather than a defence of them.

The attacks have come from some leaders in the Muslim world; from part of the French Left; and – in shrill and often ignorant terms – from some voices in the liberal media in the United States.

It is worth reciting a few facts. The proposed law has been developed in consultation with moderate Muslim leaders in France. It has been rejected in advance as too weak by the French right and Far Right.

Most of its proposals, with some amendments, have been approved by France’s fiercely independent, constitutional watchdog, the Conseil Constitutionnel. Macron has resisted (rightly) pressure from the French Right and the fiercely “secular” part of the Left for more draconian measures such as an outright ban on the Muslim headscarf in France.

Extreme ideas put forward in media interviews by the interior minister Gérald Darmanin (such as jail sentences for people who refuse to see a female doctor) have never been included in any version of the draft law. The law was proposed two weeks before the murder of teacher Samuel Paty. Photo: AFP

It is also worth pointing out that the proposed law is NOT a response to the three Islamist terrorist attacks in France in October, including the beheading of the history teacher, Samuel Paty.

It is, in part, a response to the 30 or so other serious Islamist attacks in France in the last eight years.

Macron presented the outline – then called “a law against separatism” – in a speech in the far western suburbs of Paris on October 2nd, two weeks before Mr Paty’s horrific murder.

This brutal killing followed a mendacious and inflammatory campaign in radical Islamic social media against Mr Paty and his illustrated civics lesson on the rights and wrongs of the Charlie Hebdo cartoons of the Prophet Mohammed.

It also followed a misleading campaign in parts of the Muslim world against Macron’s speech outlining his plan to resist the growing influence of extremist versions of Islam.

Much of the criticism, in both Muslim and US media, both before and after the October terrorist attacks, has ignored important elements of that speech.

Macron said in Les Mureaux on October 2nd: “We have created our own form of separatism…We have created districts where the promises of the Republic are no longer kept.”

He promised urgent new initiatives for the multi-racial French suburbs and to combat racial and religious discrimination. Without such action he said, the banlieues would remain a “fertile soil” in which extremist, Islamist propaganda would grow.

Regrettably, President Macron also seems to have forgotten, or indefinitely shelved, that element of his speech. Government officials speak of a “work in progress”. Hmm. It would be a great mistake if no mention is made of these promises when the draft law goes to the French cabinet tomorrow.

So what exactly IS in the new law, now called a law to “strengthen republican principles”?

Originally, the law contained a proposal to all but ban home-schooling for children over three. The government believes that some Muslim children, especially girls, are vanishing into radical schools which teach extremist interpretation of Islam but not much else.

School ID numbers, already given to most French children, are to be allotted to those taught at home and in wholly independent schools, outside the French public and licenced private education system. This was grossly misrepresented in part of the US media last month as an ID system for Muslim kids only.

Can't quite believe I have had to write this, but it seems necessary after the tidal wave of misinformation over the weekend https://t.co/Wh92njHbu5

Following advance criticism from the Constitutional Council, the school clauses have now been watered down. The freedom of parents to teach children at home will be maintained but under stricter regulation and inspection.

The draft law also bans the publication of information on-line which identifies people “with the intention of putting their safety or lives at risk”.

Local councils would be banned from agreeing to religious-based demands, such as female-only opening hours for swimming pools. There will be measures to widen the local (ie non-foreign) finances of places of worship.

All religious or other associations which receive public subsidies would have to sign a charter on respect for “Republican values” – recognising that “religions are not political movements”. There would be rules to try to prevent radical minorities from taking over places of worship.

The terms of the charter are being drawn up by the main French Muslim umbrella group, representing nine Islamic organisations, the Conseil français du culte musulman.

Why is any of this necessary?

A growing number of younger Muslims say they regard French state laws as inferior and contrary to the laws of Islam.

The vast majority of French Muslims – 70 percent according to one survey – are either non-practising or accept that the French secular state protects their religious freedom and that secular laws take precedence over religious law. They find themselves squeezed between radical interpretations of their faith and the undoubted Islamophobia of some French people and political parties.

In short, the proposed law defends France’s secular and democratic value. It also defends the right of French Muslims to worship free from foreign-subsidised radical propaganda.

The widespread mis-interpretation of Macron’s plan can be explained in several ways.

France’s commitment to a “secular” state, in which all faiths are protected but none promoted, is often misunderstood or wilfully misrepresented abroad. But it is also exploited and distorted by some French pundits and politicians – not just on the far right – to disguise their Islamophobia.

At its core, French secularism is little different from the British or American devotion (pre-Trump and Johnson at any rate ) to tolerance, democracy and the rule of law.

But Macron’s defence of France and his own approach would be infinitely strengthened if he recalled his own excellent October 2nd speech.

The President spoke of combating radical Islam. He also said that extremism and “the soil in which it grows” must be “addressed in parallel …over years and years.”

We will have the law to combat radicalism tomorrow. Where are the proposals to combat discrimination and to help the struggling inner suburbs?