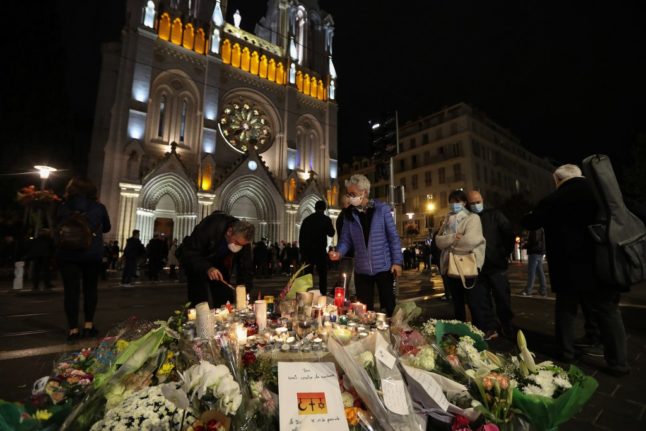 Mourners pay tribute to the victims of the terror attack outside the Basilica in Nice, on November 31st 2020.

Brahim Aouissaoui, a 21-year-old Tunisian national, was shot and seriously injured by police after the October 29th attack. He was charged after his condition in hospital improved, allowing him to be questioned.

France last month raised its attack alert to the highest level after the Nice killings, which came two weeks after the beheading of history teacher Samuel Paty by an 18-year-old Chechen refugee for having shown his pupils cartoons of the Prophet Mohammed in a lesson on freedom of speech.

Aouissaoui had arrived in Europe from Tunisia in September, first crossing the Mediterranean to Italy and then crossing into France overland.

On the morning of October 29th, Aouissaoui entered the Basilica of Notre-Dame in the heart of the southern French city of Nice, carrying a copy of the Koran, three knives and two mobile phones, according to France's anti-terror prosecutor Jean-Francois Ricard.

In a near half-hour frenzy, he used a 17-centimetre (six-and-a-half inch) knife to cut the throat of a 60-year-old woman, who died inside the church.

The body of a man, a 54-year-old church employee, was found nearby inside the basilica – his throat had also been slit.

Another woman, a 44-year-old who fled the church to a nearby restaurant, died shortly afterwards from multiple knife wounds.

Aouissaoui was shot several times by police after the killing spree and even as he was being arrested continued to shout “Allahu Akbar” (God is greatest), before being rushed to the city's Pasteur hospital.

French intelligence had nothing on file relating to Aouissaou prior to the attack.

He hails from a large family of seemingly modest means living in the central Tunisian city of Sfax.

His mother said he repaired motorcycles and described how he had taken to prayer over the past two-and-a-half years.

“He didn't go out and didn't communicate with others,” she told AFP shortly after the attack.