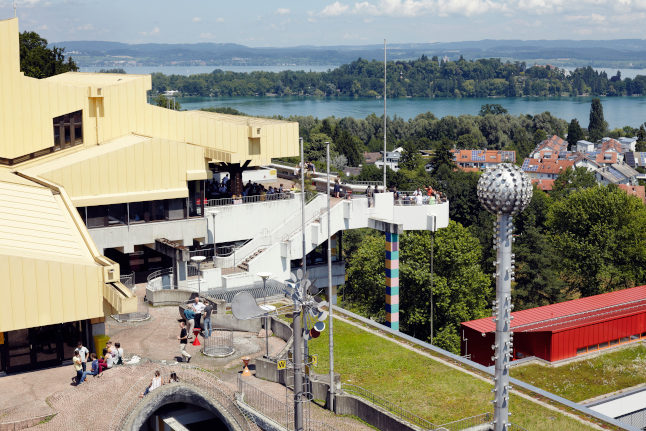 Almost a million people applied for asylum in the country following Chancellor Angela Merkel's decision to welcome the increased numbers of refugees fleeing war in Syria in 2015. However, refugees and asylum seekers face a long administrative process in order to submit a successful application to stay in Germany, and a lack of access to the information required further complicates matters. This is where the Refugee Law Clinic at the University of Konstanz comes in.

Founded in 2016, the Refugee Law Clinic here in the lakeside town of Konstanz, is run by law students who provide free advice to refugees and asylum seekers to help them through the complex and daunting process. Lukas Schröder, a volunteer advisor, is by now intimately familiar with the main hurdles that need to be overcome when arriving as an asylum seeker in Germany.

Emphasising that, in practice, there are many much smaller steps and criteria to be fulfilled, he explains: “The first step is to submit an Asylgesuch, an application for status as an asylum seeker. Then you would be taken to a type of communal accommodation and the Asylverfahren or asylum procedure can be lodged with the BAMF (Bundesamt für Migration und Flüchtlinge, or Federal Office for Migration and Refugees). A residence permit is granted for the time needed to review the application. Eventually, you would sit two interviews to examine how you came to Germany and why it was necessary to leave your home country.”

Schröder explains that many of the refugees who come to the Clinic are those whose applications were initially turned down, and who don't know how to proceed. Unfortunately, refugees either do not receive adequate information about how to prepare for the interviews, or are misinformed from inaccurate sources on their way to Germany. “That's where we can help them out – we can give them the information they need to submit a successful application if they should rightfully get one.”

Marie Nocke was among the students who joined forces in 2016 to found the Refugee Law Clinic in Konstanz after seeing that the state was not providing adequate advisory services. “We just had the feeling we had to do something to help refugees coming to Germany and use our legal skills to support people who badly needed it,” she explains.

“It was difficult because we don't study asylum law at university – so we had to teach ourselves. Each of us took a specific area to research and taught that topic to the others. Perhaps we were a bit naïve, but we were very ideologically motivated!”

The Refugee Law Clinic does not represent anyone in court – its role is to provide advice and fill in the gaps in the system. “Many newcomers come from less bureaucratic countries, so they don't always realise how important it is to respect deadlines – when they miss them, they can lose their rights,” Nocke clarifies.

“So we can help them navigate the system. Sometimes we have to recommend they get a lawyer because there is only so much we can do as students, but even then, when they receive a letter or a legal decision they don't understand, we can explain what it means for them. Even if they are learning German, understanding bureaucratic German is another kettle of fish altogether!”

The Refugee Law Clinic at the University of Konstanz was neither the first nor the last of its kind: similar initiatives sprouted in many German universities following 2015, when the number of refugees arriving in the country peaked. Since then, the various clinics have established a nationwide network whereby they can learn from each other about how best to help asylum seekers towards achieving refugee status, and tackle common challenges.

These challenges are numerous: first and foremost, sourcing finance through various grants. Funds had to be found to pay two professional lawyers whom the volunteers could consult for advice: this was achieved through the DAAD (German Academic Exchange Service) and the law faculty at the university, though securing adequate resources is an ongoing issue.

Another limitation is the number of motivated volunteers and the length of time for which they can commit. Students tend to move away from the relatively small town Konstanz when they graduate, so there tends to be a high turnover among volunteers.

“There are also cultural barriers – for example, some clients come from countries where women play a very different role in society compared to here in Germany,” adds Nocke.

It is not surprising that the coronavirus pandemic has added another layer of difficulty to keeping the Clinic running: drop-in hours are more difficult to arrange, recruitment is more difficult than ever and a lack of physical presence by volunteers can be complicated.

“We are lucky to have an interpreter to help out with refugees who speak Arabic, and before we could just knock on his door and ask him to drop by for a few minutes. Obviously, this is no longer possible,” says Schröder.

Nowadays, there is a lower proportion of clients from Arabic-speaking countries including Syria; those who come to the RLC for help now come more frequently from West Africa, and advice can often be given and received in English. Overall, the number of users is declining: the clinic provided advice to around 200 clients in both 2018 and 2019, while the volunteers predict they will have advised around 150 people by the end of 2020.

What becomes of those who use the services? Nocke says that they don't always stay in touch. “Occasionally, there are lovely stories of people who have managed to bring their families to Germany and can be reunited and have a chance for a better life. It's wonderful to meet people who have managed to find an apprenticeship or job and have learned to speak German. But generally, it's a good sign when people don't keep coming back, because it means they don't need our help any more!”

The university's board of governors recognised the contribution of the Refugee Law Clinic to social life in the city by awarding the project the prestigious annual university prize in 2018 – a testament to the effort of those involved.