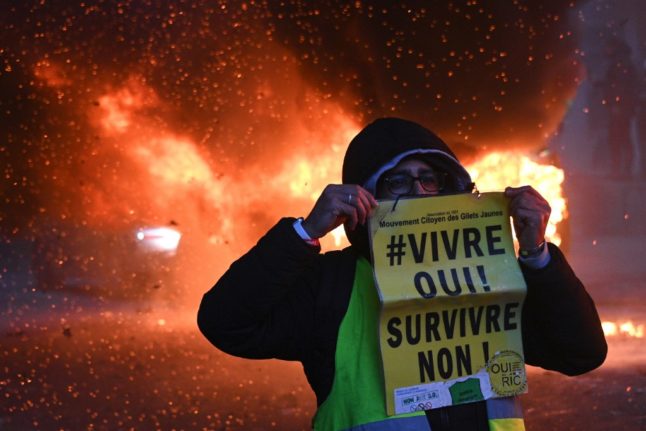 This weekend saw violent clashes at a demonstration in Paris and nearly 100 people arrested.

Black Bloc “casseurs” in Paris today. They once again infiltrated a demo and left cars burned and banks ransacked. Riot police fire tear gas… This has been going on for a few years now… https://t.co/8ydOa13dgF

Aftermath of yesterday's Black Bloc violence in the 20th arrondissement of Paris pic.twitter.com/RpjAGJ5heZ

You might have seen this eye catching image from AFP which appears to show a police officer on fire. Although there was undoubtedly serious violence aimed at the police, this image is not quite what it seems when viewed from another angle.

But perhaps the longer-lasting issue from the weekend was an interview that French President Emmanuel Macron gave to the website Brut, very popular with younger people.

It was a wide ranging interview, but it was his comments on police violence – together with a proposal for a platform to report discrimination by police – that caused a stir. Two of the largest French police unions have called for a ‘total blockade’ by their members in response to his acknowledgement that police violence exists.

One of France’s longest-running terror investigations moved forward over the weekend when a man was charged over the 1982 attack on a Jewish restaurant in Paris.

On a cheerier note, we have to mention this lovely scheme that pairs French learners with lonely older French people for video calls. For learners it’s a great way to practice your French and for elderly French people, many of whom have been self-isolating for nearly 10 months now, it’s a vital bit of company and social interaction.

We wouldn’t advise using today’s French word with old folks though – it’s actually an English word, but one that has acquired a very specific meaning in France.

If you have a France-lover in your life (or are looking for some self-gifting ideas) we asked our readers to recommend the best books, box sets, podcasts and media subscriptions about France – from heavyweight to funny – and they came up with a cracking ideas list.

As Brexit talks lurch towards their final, tortured endgame, we’re looking at what the rules will be on driving in France for British visitors and residents from January.

We’ve also got a guide to swapping your European health insurance card for a French one and the key documents Brits might need to prove their rights in France.