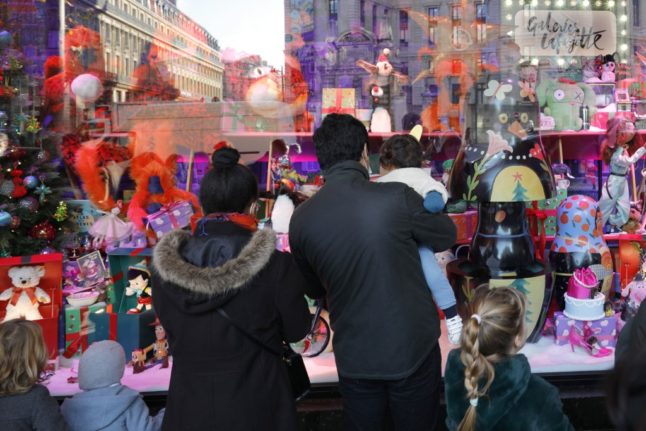 Parisians check out the window display outside the Galeries Lafayette departmentstore in the capital on November 28th, the day France eased lockdown somewhat and allowed non-essential stores to reopen

When French President Emmanuel Macron announced that France would lift lockdown on December 15th, he said this would only happen if the country’s Covid-19 levels were low enough.

France imposed a second lockdown on October 30th when the country’s hospitals found themselves on the verge of becoming overwhelmed with critically ill patients for a second time this year, after the Covid-19 epidemic exploded across the country.

But daily case numbers remain above 5,000 – on Wednesday evening French health authorities reported 14,064 new Covid-19 positives – and Macron was clear that, when deciding on whether or not to lift the lockdown as planned on the 15th, reducing the number of new positives to 5,000 per day would be key. Hospital workers in France transfer a Covid-19 patient from one hospital to another. Photo: AFP
Will France reach its goal of 5,000 cases?
“We are on the right track,” epidemiologist Antoine Flahault told The Local.
Flahault is the Director of the Institute for Global Health at the University of Geneva, which monitors the development of Covid-19 closely in the world.
While he stressed that their models could not predict events too far ahead in the future – even December 15th was “too far ahead to be precise” – he also said that, if the current trend persisted, France “should arrive below 5,000” new cases per day in time.
Latest cases data
In late October, at the peak of the second wave of the virus, France recorded roughly 50,000 new Covid-19 cases each day on average.
Last week that number had dropped to around 12,000 on average. The steep decrease was proof that the lockdown, even the more relaxed version imposed this autumn, was effective, health authorities concluded.

Daily numbers of new cases tend to fluctuate, and usually drop sharply at weekends and on Mondays, but a weekly average of new cases shows a clear trend – on December 2nd, the average number of cases over the previous seven days was 10,965, on November 25th, it was 16,723 and the week before – November 18th – the weekly average was 29,585.

The R rate on Wednesday had dropped down to 0.56, which means 10 new Covid-19 positives will infect 5 to 6 other people on average, implying an overall shrinking disease across France. Parisians at a bookstore as non-essential shops were allowed to reopen on November 28th. Photo: AFP

What about intensive care patients?

On December 2nd, France counted 3,488 total patients in intensive care wards – 117 less than the day before.

If the current trend continues, France will reach its goal of less than 3,000 total intensive care patients on December 15th, according to French data scientist Guillaume Rozier, who daily crunches Covid-19 numbers for his site Covid Tracker. see graphic below).

The percentage of intensive care beds occupied by Covid-19 patients – another key indicator into how the health system is coping – has also shown a slow steady drop, from near total capacity when lockdown was imposed to 68.8 percent on Tuesday.

Death rates are not one of the indicators that lifting lockdown depends on, but these too have begun to fall, albeit slowly. France recorded 310 Covid-19 deaths on December 2nd, down from 384 the week before.

But on Saturday, November 28th, France relaxed lockdown rules somewhat, letting non-essential shops reopen and permitting individual trips outside for exercise for up to three hours a day and within 20 kilometres of the home.

“It is possible that the virus will slow down less quickly due to this relaxation, and that we may not reach the goal by December 15th,” Flahault said, “but we would if things stayed the way they are today.”

The President of the Scientific Council which advises the government on its Covid-19 strategies, Jean-François Delfraissy, told Le Monde late in November that he thought the country would reach the goal of 5,000 cases per day “after Christmas, or early January”. Customers with protective face masks queue up outside a clothing shop in Cabries, southeastern France, on November 28th. Photo: AFP

Daniel Camus, a professor at the Pasteur Institute in Lille, one of the foremost French research institutes studying the pandemic, told The Local he worried about the recent rise of the number of daily cases.

“Five thousand is not an unrealistic number, but it all depends on the French,” he said.

It could be a blip, but it could also be the sign that the virus was spreading with increased pace, Camus said, adding that the next few days would be crucial for determining whether the spike was just a one-off or a trend.

“We are in a period of uncertainty,” he said, “we will know more on Saturday.”

Camus said there was a “real risk” that relaxing the lockdown rules could provoke a third wave of infections.

“We are seeing clearly that some are behaving in a risky way,” he said, referring to the masses gathering in Paris and other cities last Saturday to protest a new security law, and to media reports showing crowds queuing as shops reopened.

“The virus is still circulating at a very high level. If we let go now, we risk a resurgence,” he said.