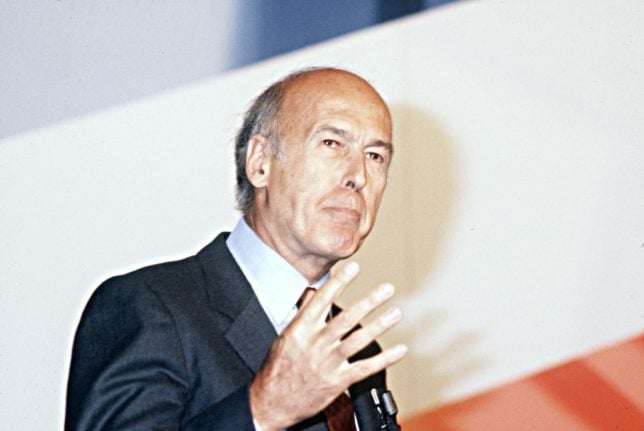 Elected in 1974 at the age of 48, the centrist leader known to most French people simply as Giscard or VGE quickly ushered through a spree of radical reforms, legalising abortion, liberalising divorce and reducing the voting age to 18.

With a more relaxed presidential style than his predecessors Charles de Gaulle and Georges Pompidou, he was seen in public playing at soccer and the accordion.

He also hosted garbage collectors to breakfast and invited himself to dinner at the homes of ordinary citizens.

Giscard involved his family in his political appearances, had the blue and red of France's “tricolore” flag toned down, and the Marseillaise national anthem slowed down.

An economic liberal with pro-US leanings, he was more outward-looking than his predecessors, being an ardent pro-European and champion of increased integration.

It was at his initiative that leaders of the world's richest countries first met in 1975, an event that evolved into the annual summits of the Group of Seven (G7) club. Born to a well-to-do French family, Giscard was firmly part of the elite.

Tall and slender and with an elegant, aristocratic manner, he studied at France's elite Ecole Polytechnique and the National Administration School.

Aged just 18, he joined the French resistance and took part in the World War II liberation of Paris from its Nazi occupiers in 1944. He then served for eight months in Germany and Austria in the run-up to the capitulation of the Third Reich.

He launched his political career in 1959, becoming finance minister in 1969.

In 1966 he founded the Independent Republicans party, which eventually became the Union for French Democracy (UDF) — a formation of disparate centre-right parties.

He emerged as the centre-right leader in the run up to his election in 1974.

He forged a powerful Franco-German alliance with Social Democratic Chancellor Helmut Schmidt — the pair spearheading the European Economic and Monetary Union that laid the groundwork for an eventual single currency.

Symbolically, he had been born in the German city of Koblenz while it was under French occupation in the aftermath of World War I. But his term was also buffeted by the 1970s shock rise in oil prices, rising unemployment and inflation.

It was during Giscard's term that in January 1979 the Islamic Revolution led by Ayatollah Ruhollah Khomeini ousted Shah Mohammad Reza Pahlavi from power.

Just over a week before, Giscard had hosted his West German, US and British counterparts for a summit on the French territory of Guadeloupe at which they agreed the shah was set to fall.

Giscard's October 1976 visit to Tehran for talks with the shah remains to this day the last visit by a French head of state to Iran.

His reputation was tarnished by claims in 1979 that he had personally received diamonds, while finance minister, from brutal Central African Republic dictator Jean-Bedel Bokassa.

Despite his denials, the scandal cast a shadow over his bid for a second term which he lost to the Socialist Francois Mitterrand in 1981 by more than one million votes.

It was a blow to Giscard, who wrote in 2006: “What I feel, is not humiliation but something more serious: frustration at a job unfinished.”

He remained active in centrist politics, however, regaining a seat in the French parliament.

He also served as a European parliamentarian (1989-1993) and in 2001 was selected by European leaders to lead work on the bloc's constitutional treaty — which was then rejected by 55 percent of French voters.

In 2004, after losing his legislative seat, Giscard ended his active political career.

'The Princess and the President'

The death of Mitterrand in 1996 followed by the passing of the socialist's successor Jacques Chirac in 2019 left Giscard as by far France's oldest surviving leader.

In retirement he gained a penchant for writing racy novels, including the 2009 “The Princess and the President” that recounts a romance between a French leader and a British princess. It was so evocative of the late Princess Diana that it sparked speculation about real-life inspiration.

In 2003 he became the first former head of state to be named to the French Academy, reserved for the country's literary elite — a recognition more of his writing in political and analytical books than his fiction.

Giscard married in 1952 Anne-Aymone de Brantes, the daughter of an officer in the French resistance who died in a Nazi concentration camp.

The couple had two daughters and two sons.

Increasingly frail, he last appeared in public in September 2019 at the funeral of Chirac in Paris.

In May 2020, French prosecutors opened an investigation after claims by a German reporter that he had repeatedly touched her behind at his Paris office after an interview in 2018.

But Giscard strongly denied the allegations, describing them as “grotesque”.

“The direction he set for France still guides our way… his death has plunged the French nation into mourning,” Macron said in a statement, describing his predecessor as “a servant of the state, a politician of progress and freedom”.