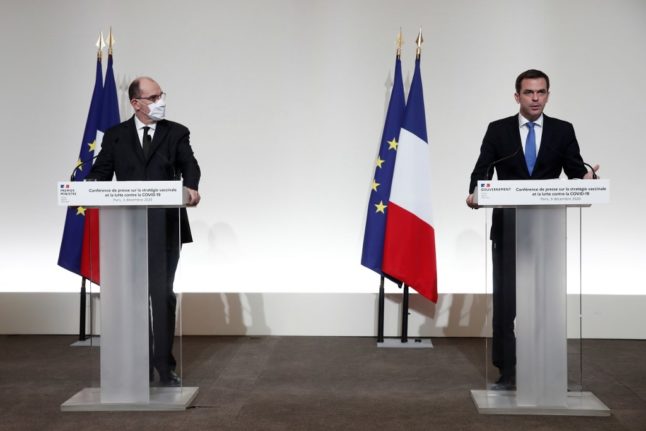 Giving a briefing on France's vaccine strategy, Castex said the country was ready, and the first vaccinations – intended for the most at-risk groups – would begin in January.

He also announced that France would be buying its vaccines through the EU's purchase programme, telling reporters that six supply contracts have been signed by European authorities.

“Thanks to this work, the prices are the same for all countries (…) for quantities fixed on a pro-rata basis.”

He said that France would be able to access 200 million doses of vaccine under this scheme – the population of France is 67 million, but the vaccine requires two injections, several weeks apart.

He also said that médecins généralistes (GPs or family doctors) would be at the heart of the vaccination programme, and added that he hoped this would help people be confident in the vaccine.

“Everyone must be able to be vaccinated by a nearby health professional whom they know and trust,”  he said.

The vaccine will be free for everyone.

France's Health Minister Olivier Véran laid out a more detailed timetable for vaccinations, and the order they would be offered.

With multiple different vaccines being developed, Véran also laid out a timetable for which vaccines are due for approval and when.

The Pfizer/BioNTech vaccine, which is due for final approval from the European medical regulator shortly would be the one used for phase 1 in January. The European Medicines Agency is due to make its approval decision by December 29th.

However he said that France has the necessary equipment and infrastructure to be able to distribute this. He said that trials of the logistics of distribution would be carried out throughout December.

By phase 2 of the programme in February, vaccines including the Moderna and AstraZeneca jabs could also be available and by phase 3 the French-developed Sanofi vaccine could be approved and available for use.

Véran also addressed vaccine scepticism in France after a poll for the Journal du Dimanche newspaper found that only 41 percent of adults said they intended to be vaccinated.

He said: “As well as Covid, we must vaccinate against fear and that too is my responsibility.”

He added that “the best weapon against fear is good understanding” pledging transparency on all scientific advice that the government received.

However he reiterated what president Emmanuel Macron had already stated about not making the vaccine compulsory, stressing that “no-one will be obliged to be vaccinated”.